TOD and Carsharing: A Natural Marriage

Transit oriented development (TOD) is arguably the most cogent and acceptable form of smart growth. Almost everyone “gets” TOD. Politicians, professionals, and lay citizens alike understand that if there is any logical place to promote compact, mixed-use development, it is around transit stations.

The benefits of TOD are largely borne out by empirical evidence. People who live near rail transit stops in the US have much higher rates of transit use than the typical resident of a rail-served region. In California, surveys show that residents who live near a transit station use transit for their commutes at a rate four to five times higher than residents of the same region who don’t live near stations. This pattern has held steady over time. In the case of the Pleasant Hill BART station, for instance, 47 percent of station-area residents took transit to work in 1993. Ten years later, in 2003, the share was 44 percent.

The higher transit use among station-area residents is largely a product of what economists call “self selection.” People who prefer to take a train to work…are predisposed to transit commuting; they are not “converted” to transit use simply because of where they live.

The higher transit use among station-area residents is largely a product of what economists call “self selection.” People who prefer to take a train to work—whether to avoid the stress of fighting traffic or to have time to read a newspaper en route to work—purposely choose to live near a rail stop. That is, they are predisposed to transit commuting; they are not “converted” to transit use simply because of where they live. A recent study I led estimated that around 40 percent of the ridership bonus attributed to TOD is due to self selection.

TOD has increased transit ridership, but this has had little influence on how TOD projects are seen and judged by municipal traffic engineers and local planners. Traditionally, engineers and planners evaluate new developments in terms of their impact on automobile traffic, not on how much they might increase transit ridership. That is, practitioners pass judgment on the transportation impact of any new development project, whether near a rail station or not, based on roadway level-of-service rather than on modal splits (the distribution of trips across different modes: car, rail, bike, etc.). In a society where over 90 percent of all trips are by car, planners and engineers who are accountable to local constituents for keeping streets running smoothly care more about traffic congestion than about transit use. Herein lies a dilemma. Invariably, because not all TOD residents take transit, and many of them drive, dense development will congest the nearby road intersections during peak periods. In the near term, even if it is well served by transit, dense development translates into more congestion.

In a society where over 90 percent of all trips are by car, planners and engineers who are accountable to local constituents for keeping streets running smoothly care more about traffic congestion than about transit use. Herein lies a dilemma.

NIMBY opposition to higher density has stopped TOD plans around a number of middle-income neighborhoods served by BART in the San Francisco East Bay—Rockridge, North Berkeley, Orinda, Lafayette—mainly through building height restrictions. For example, some 2,400 new households have located within a 5-minute walk to the Pleasant Hill BART station over the past twenty years. But TOD dwellers are no more immune to NIMBYism than anyone else. Once a critical mass of TOD residents forms, they create neighborhood associations which, among other things, stop efforts to add more development. In Pleasant Hill, plans to build a massive entertainment complex, with a 20-screen IMAX movie theater, were scuttled due to neighborhood backlash. The lesson is clear: don’t expect to transform middle-income, stable neighborhoods with large-scale infill projects, because residents have the political might to stop such proposals every step of the way. More acceptable are TOD proposals for transitional neighborhoods, redevelopment districts, or greenfields with few people around to oppose new development. Also, forget about large-scale, regional trip generators that bring outsiders to neighborhoods made up of professional-class residents. Only local- and neighborhood-serving land uses will be welcomed in such settings.

The downside of preventing new growth around transit stations is that the development will end up elsewhere and most likely increase vehicle miles traveled (VMT)—the strongest single correlate of greenhouse gas emissions (GHG), air pollution, and energy consumption in the transport sector. Like toothpaste in a tube, if development is squeezed from one area, it simply gets redistributed elsewhere. Shifting growth from TOD to AOD (automobile oriented development) can reduce local traffic congestion at the cost of environmental degradation for a region at large.

Shifting growth from TOD to AOD (automobile oriented development) can reduce local traffic congestion at the cost of environmental degradation for a region at large.

There is good and bad congestion, just like good and bad cholesterol. I would argue that congestion caused by TOD is, for the most part, good. There is no avoiding the fact that denser areas have denser traffic. Dense cities with world-class rail systems, like Paris and London, are often more traffic-choked than sprawling cities. Yet these dense cities are also attractive places to live, work, and visit. Congestion is part of the territory of being an active, vibrant place. TOD, moreover, offers a relief valve to congestion. In a TOD, it is easier to predict when and where congestion will occur, and it is easier to avoid that congestion—e.g., one can hop on a train or ride a bike.

Congestion is part of the territory of being an active, vibrant place.

TOD and the De-Generation of Trips and Parking

I recently led a study that probed the traffic implications of TOD. Specifically, the study measured vehicle trip generation rates for 17 TOD projects in five US metropolitan areas (Philadelphia, Northeast New Jersey, Washington, DC, Portland, and the San Francisco Bay Area). Over a typical weekday period, the TOD housing projects averaged 44 percent fewer vehicle trips than that estimated by the Trip Generation manual of the Institute of Transportation Engineers (ITE), which is widely used as the reference manual for gauging traffic impacts. As Donald Shoup and others have noted, the predictions of the ITE manual are based largely on observing suburban settings with meager transit service. Unsurprisingly, these settings exhibit high levels of car travel. During peak periods, our study showed even higher levels of trip de-generation for TODs—nearly 50 percent fewer vehicle trips than ITE predictions (see figure).

A more recent analysis I led extended the study to analyze parking generation for 15 TOD projects in Portland and 16 in the Bay Area. While average vehicle trip generation rates in Portland were 41 percent below the ITE rates for TOD projects, the average use of parking spaces was only 11 percent less. The parking occupancy at three of the 15 surveyed TOD projects in Portland was actually higher than that predicted by the ITE manual. In the Bay Area, owning and parking a car seemed to be even more of a necessity for TOD residents. There, TOD parking rates were equivalent to ITE’s standard of 1.2 spaces per unit. For all seven TOD housing projects surveyed near the Fremont BART station, parking levels were actually higher than the ITE rates—as much as 40 percent above. What’s going on? One factor may be that most cities do not reduce the parking requirements for TODs. One survey of TODs in California found no reduction in cities’ parking requirements at seven of the 11 sites studied. Planners appear to assume that more transit will not reduce parking demand, and they may be right. In most suburban TODs, residents still need access to a car. They just don’t use them as much. But like most suburbanites, they still need a car to get to most non-work destinations—the vast majority of which are away from rail stops. While transit-oriented housing might mean that more trip origins are near rail stops, as long as most destinations are not, TOD residents will still own cars and use them for shopping, going out to eat, and the like. 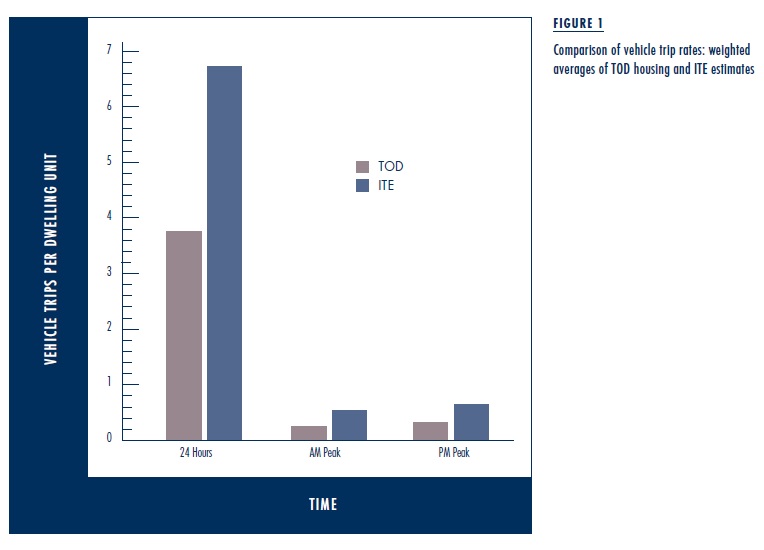 My guess is that a significant share of TOD residents would shed a car if they had carsharing options. My graduate students and I recently completed a four-year study of the impacts of carsharing on travel and car ownership based on experiences with the City CarShare program in San Francisco. From a panel survey, we found that four years into the City CarShare program, 29 percent of carshare members had gotten rid of one or more of their cars. Fully 63 percent of City CarShare members lived in zero-vehicle households. A predictive model showed that living close to a carshare pick-up spot was strongly associated with car-shedding. By extension, putting shared cars in and around TODs could relieve many households from owning a second car or a vehicle altogether. TOD and carsharing, I contend, are a perfect marriage. Through a combination of proximity advantages and lifestyle predispositions, living near transit can de-generate vehicle trips. And with the option of carsharing, it can likely reduce parking demands as well. Strangely, as of now, there are few TODs in the US with carsharing options. Perhaps carsharing companies fear the competition of transit. Or maybe transit agencies fear that carsharing will take away customers. In truth, carsharing and transit are more likely complements than competitors. Experiences from Switzerland suggest this is the case. Zurich, for example, has the second highest per capita transit use in the world (over 600 transit trips per capita per year) and the highest per capita carsharing participation anywhere (7 percent of households are members of Mobility Carsharing Switzerland). And in spite of having one of the world’s highest per capita incomes (on a purchasing power parity basis), only one out of three households has an off-street parking space. Zurich, I might add, has the highest commercial real estate prices in Europe (along Bahnhoffstrasse) and according to the management consulting firm Arthur D. Little, ranks number one in quality-of-life among global cities. In Zurich, world-class transit, carsharing, parking limits, and prosperity go hand-in-hand.

A predictive model showed that living close to a carshare pick-up spot was strongly associated with car-shedding. By extension, putting shared cars in and around TODs could relieve many households from owning a second car or a vehicle altogether. TOD and carsharing, I contend, are a perfect marriage.

One project in the works that aims to mimic the success of places like Zurich is Greenprint, a TOD pilot project in Richmond, California. Designed by new urbanists with state funding support, the Greenprint housing project aims to cut the carbon emissions of residents 50 percent below that of a traditional apartment building. Besides proximity to transit, a combination of carsharing using electric and hybrid vehicles, on-site childcare, and a state-of-the-art telecommuting center will be introduced. Forward- thinking public policies like carbon-trading credits for projects like Greenprint would go a long way toward ushering along progressive initiatives that marry TOD with demand-management initiatives like carsharing. 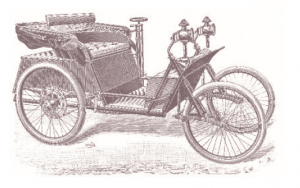 Robert Cervero, “Transit Oriented Development’s Ridership Bonus: A Product of Self Selection and Public Policies,” Environment and Planning A, 39, 2007.