Prior to 1923 California, like most states, financed highway construction and maintenance by issuing general obligation bonds. By the early ’20s direct appropriations for highways and interest payments on the bonds had risen to more than 40 percent of the state’s budget. So in 1923 California adopted a new system of highway finance using earmarked user fees, in particular the per-gallon fuel tax. Before long all fifty states had similar user taxes, as did the federal government.

This system means that highways do not compete for revenues with other programs such as education and social services, making them unique within state government. Since they are funded almost completely out of current revenues, they are far less dependent on bonded debt than many other public programs. User fees have the support of many environmental organizations who believe that those who pollute and deplete energy resources should pay in direct proportion to the extent they do so. They also offer what economists call “price signals” that encourage more efficient use of the transportation system. 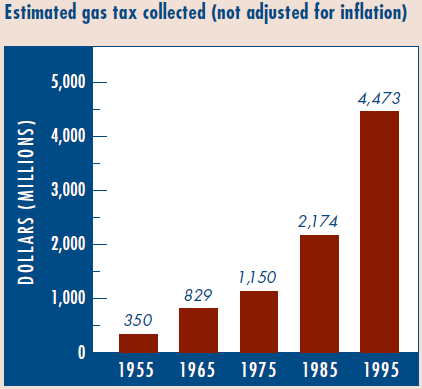 Since the 1960s California has seen substantial and sustained contraction of fuel-tax buying power, and today there is again a growing sense of financial crisis. The problem is not an actual decrease in dollars collected, but rather a dramatic fall in purchasing power of the fuel tax even as highway use continues to rise. Because gasoline and diesel fuel taxes are levied on a per-gallon basis, they do not automatically keep up with inflation. The gas tax can’t produce more revenue unless it is explicitly raised by act of the legislature, and legislators are understandably reluctant to raise gas taxes very often, fearing they’ll alienate constituents.

The combined effects of inflation and fuel economy are shown in these graphs. While the sum of federal and state gasoline tax collections in California has grown from $350 million in 1955 to $4.5 billion in 1995, the “real” value of those 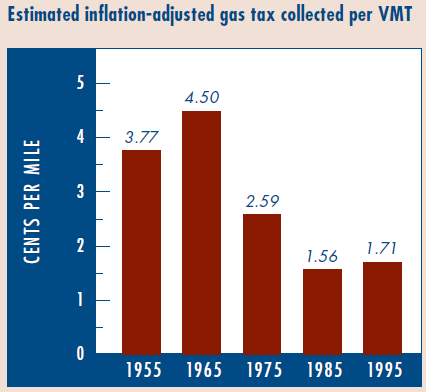 collections has fallen dramatically. When corrected for inflation and fuel-economy changes, the gas tax per vehicle mile has fallen by more than 50 percent from 3.8 cents per mile to 1.7 cents.

The California state fuel tax stands today at 18 cents per gallon (there is also a federal tax of about the same amount). Restoring its buying powerto the 1950 level would require an increase of 25 cents per gallon to a total of 43 cents. The California legislature is reluctant to consider even a small increase in the state fuel tax and would regard as lunacy the prospect of more than doubling it. Instead, a senator has proposed placing before the voters a $16 billion bond issue backed by the general revenues of the state.

Over the next year or two Californians will engage in lively political debate over how to finance their highways. And because the fuel tax is similar in other states and at the federal level, this dilemma will recur many times during the coming decade.

Professor Hill earned her Ph.D. at Princeton University. She most recently served at the U.S. Geological Survey as the chief of Modeling and Uncertainty of Complex Groundwater Systems in the national research program in Boulder Colorado. Her research interests include using hydrologic and environmental data, computer modeling, and uncertainty assessment to inform resource management and public policy (m312h412@ku.edu).