In addition to their many advantages, cars also cause problems: traffic congestion, air pollution, energy consumption, and even reduced mobility for those who don’t own a car. Carsharing is a new form of vehicle ownership that can help address these problems. Membership in a carsharing organization increases access to cars but also encourages judicious use of them. 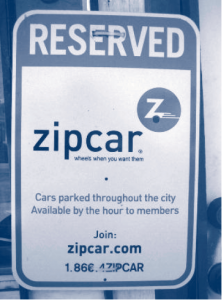 In essence, carsharing converts the high fixed costs of owning a car (purchase price, insurance, taxes, and maintenance) into smaller units—the per-hour or per-mile price of driving a car. By spreading the fixed costs of a car over many users, carsharing makes automobile travel an option for those who cannot afford to buy their own vehicle. But because users pay a high marginal cost for every hour or mile they drive, carsharing also gives members a strong incentive to drive less. In this way, carsharing can both increase mobility for people who might otherwise be carless and also reduce auto travel among members who previously owned their own car. This reduction in auto travel carries a host of benefits to society, from reducing local traffic congestion to slowing global climate change.

Where Will the Shared Cars Park?

The largest barrier to expanding carsharing is often finding and financing parking spaces. An effective way for cities to encourage carsharing, therefore, is to offer carsharing firms free or discounted parking. Cities are in a unique position to offer these much-needed parking spaces because they control a large and ubiquitous supply of curb spaces that they can make available to carsharing organizations on favorable terms.

An effective way for cities to encourage carsharing is to offer carsharing firms free or discounted parking.

Visibility. Shared cars are not hidden away in off-street lots, but are placed on streets where everyone can see them. This visibility increases the general awareness of carsharing, and may also remind car owners of the inconvenience and hassle of parking their own car.

Convenience. Dedicated curb spaces are nearly as luxurious and worry-free as valet parking or a private garage near one’s front door. When returning home, these dedicated parking spaces allow members to simply pull up to the curb and leave the car. Drivers do not have to worry about finding a space, or about being late because they have to cruise around the block. Most shared cars are located in dense areas with scarce and expensive parking, precisely the areas where residents who own cars but do not have off-street parking spend quite a bit of time cruising the streets in search of a spot to park.

Availability. On-street spaces are often the main source of parking in some areas, and car ownership is difficult in these areas as a result. These places are natural targets for carsharing, but without city partnership, carsharing organizations would be unable to expand in these places because they too would have no place to store their cars. 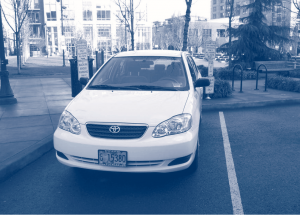 A city that wants to support carsharing by reserving curb spaces for shared cars must develop a policy to allocate the curb spaces. For example, how much, if anything, should the city charge carsharing organizations for the dedicated spaces? Should the spaces be auctioned? What is necessary to manage the dedicated spaces (procuring and installing signage, striping the pavement, and keeping the spaces clean)? To answer these questions, I conducted case studies of cities that have adopted ordinances to allocate curb parking spaces to shared cars.

A city that wants to support carsharing by reserving curb spaces for shared cars must develop a policy to allocate the curb spaces.

When a city dedicates on-street parking for carsharing organizations, it also limits the public’s access to the curb spaces. This loss of access, combined with the fact that local jurisdictions would be allowing private companies to profit from a public resource, can make the allocation of on-street spaces controversial. While there is ample precedent for this kind of privatization—cities across the US regularly dedicate sections of streets for taxi zones, hotel and restaurant valet areas, and commercial loading zones—concerns over unfair allocation of public resources are legitimate, particularly if carsharing organizations are allowed to use street spaces at no cost.

In order to diffuse these concerns, any policy that allocates on-street parking spaces to carsharing organizations should be crafted to ensure that the public realizes a return that exceeds the value of these spaces. This return can be realized through direct payments to the municipality, or through other, non-monetary benefits such as reduced air pollution or increased mobility options for low-income populations. Either way, this return should be guaranteed in a privatization agreement that ensures the public gets the best deal possible. 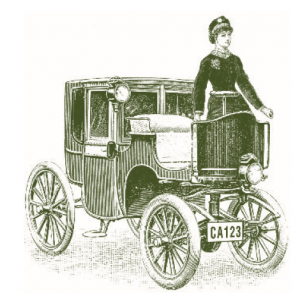 Several North American cities are currently drafting, or have already implemented, on-street parking policies for carsharing. These jurisdictions include Arlington County, Virginia; San Diego, California; Seattle, Washington; Portland, Oregon; Vancouver, British Columbia; and Washington, DC. In their approach to parking for carsharing, these cities adopted a range of policy approaches. In what follows I summarize the key findings of my case studies that examined these approaches.

• Legislative structure. Setting aside street space for a private organization requires legislative action. In general, cities break the legislative mechanism into two parts: (1) an ordinance or other official action by a governing body, and (2) the administrative details. The first component sets out broad parameters for the policy, including key political provisions, and then delegates authority to another department to establish the administrative details of the program, which can be updated and modified as necessary.

• Fees. Few cities initially charged carsharing organizations for on-street spaces. As carsharing operators have become more established, however, several cities—such as Vancouver, Portland, and Washington, DC—have moved toward revenue-neutral fee structures; the city sets a fee for each space to defray the public costs of their program and to recoup any lost meter revenue.

• Signage and demarcation of spaces. Several cities use orange “Options Zone” poles (first developed in Portland) to designate their on-street carsharing spaces. These brightly colored poles include images meant to highlight alternative transit options such as biking and walking. When combined with brand-neutral marketing brochures and places to secure bikes, these poles help the public to learn more about carsharing and facilitate the use of bikes to get to and from shared cars. Tow-away signs and pavement markings appear to be the most effective way to ensure that other drivers do not mistakenly park in carsharing spaces.

• Results. Cities often provide multiple forms of support to carsharing organizations, so isolating the effect of providing on-street parking spaces can be difficult. However, evaluations have consistently shown that carsharing membership increases as more vehicles are added, and that members who previously owned one or more cars reduce their vehicle travel and/or sell a car.

The growth in carsharing can greatly benefit even those who do not participate in it. One study found that each shared vehicle removed 9 to 13 other vehicles from the road. Fewer vehicles can lead to significant reductions in traffic congestion, air and water pollution, and parking infrastructure. 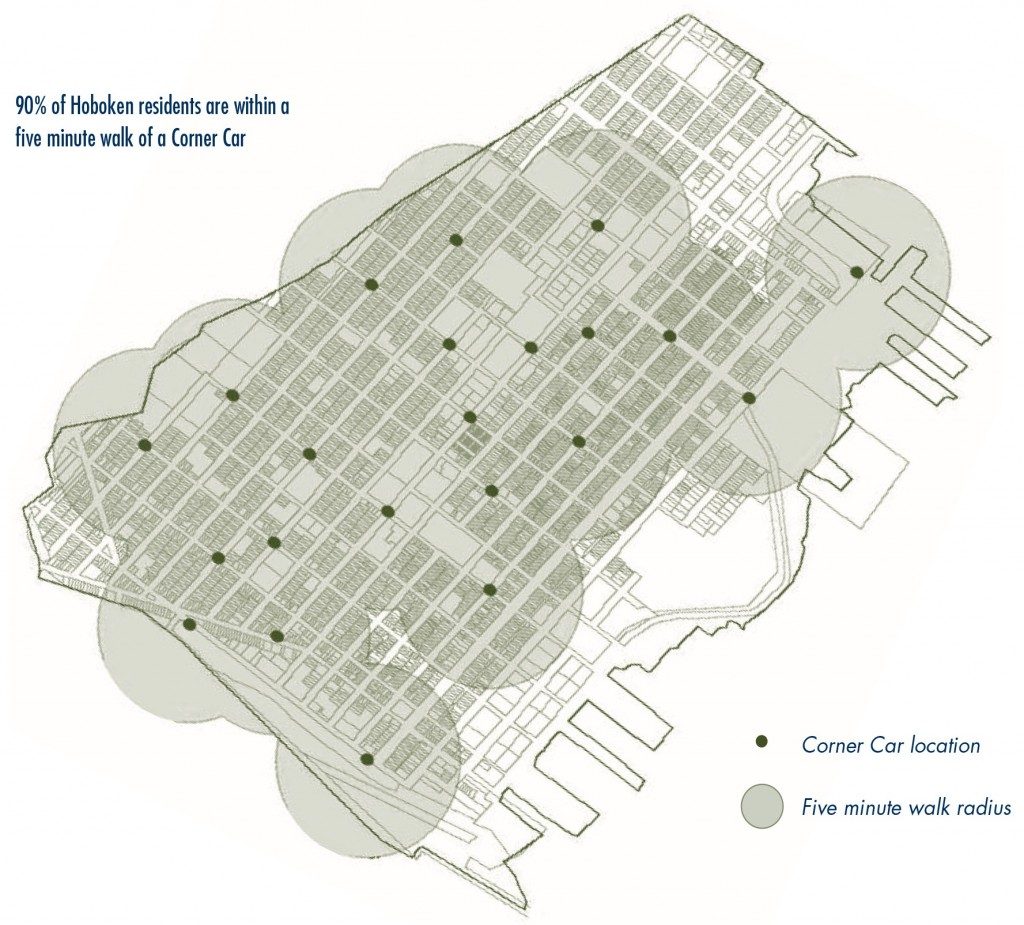 Cities can go beyond responding to carsharing companies’ requests for on-street parking spaces and proactively plan the location of these spaces. Hoboken, NJ, has established its citywide Corner Cars program that places shared cars in on-street spaces at corners throughout the city so that 90 percent of the population lives within a five-minute walk of at least one carsharing location.
Because each shared car in Hoboken has been estimated to replace 17 private vehicles, dedicating the corner spaces to shared cars can increase the availability of on-street parking for everyone else. According to Hoboken’s Transportation and Parking Director Ian Sacs, “Instead of taking on millions of dollars in taxpayer debt for structured parking, residents who switch to carsharing will save thousands of dollars. It’s the 21st Century solution to contemporary urban parking woes.”

Hoboken requires the fleet of shared cars to maintain an average of 35 miles per gallon. If each shared car replaces several privately-owned cars that have lower fuel efficiency, the on-street Corner Car program can significantly reduce the city’s carbon footprint. 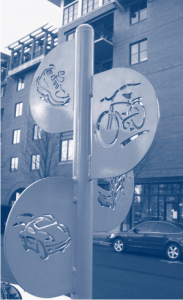 Any policy that dedicates on-street spaces for shared cars must have a mechanism to verify and ensure the benefits of carsharing, particularly if local jurisdictions choose not to charge a market-based fee for these spaces. A valid verification mechanism can address concerns about privatization and also ensure that the public realizes a return on its investment. The following provisions should be included in any agreement between cities and carsharing organizations:

• Ensure that vehicles emit minimal pollutants. Require that all vehicles parked in on-street spaces meet the EPA’s ultra-low-emissions-vehicle standards, or vary the fees based on the emissions profile of each shared car parked.

• Verify benefits. Require that the carsharing organizations provide annual travel behavior data on their members to the municipality.

• Ensure expansion—not just subsidization. The city’s investment should help carsharing organizations expand, not simply reduce their current operating costs. Many carsharing organizations have at least some vehicles parked in off-street private locations, and a poorly-designed agreement could allow the organizations to move these cars from off-street spaces (paid) into the on-street ones (free). The organization gains substantially when this happens, but the public doesn’t. To prevent this sort of outcome, cities should mandate that any cars parked in private off-street lots remain there for a period of time after the street spaces are dedicated. 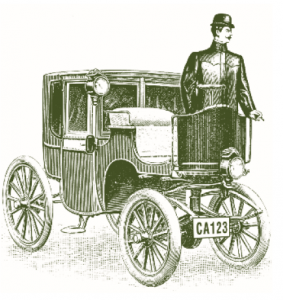 On-street parking spaces for shared cars will encourage the growth of carsharing because on-street spaces create extra value in two ways. First, the time savings and convenience of on-street spaces can attract new members to carsharing organizations. Second, the great visibility of shared vehicles prominently parked on the streets will serve as advertising that can show the benefits of membership.

Reducing the on-street parking available to privately owned cars might even encourage more people to become carsharing members, creating a positive cycle that will further increase the benefits of carsharing.

Some drivers may oppose dedicating on-street parking spaces to shared cars because it will reduce access for privately-owned cars. Nevertheless, carsharing’s benefits are well established. If carsharing reduces vehicle travel, particularly at peak hours, it can reduce traffic congestion, air pollution, and energy consumption. It can also increase mobility for a city’s poorest residents. Reducing the on-street parking available to privately owned cars might even encourage more people to become carsharing members, creating a positive cycle that will further increase the benefits of carsharing. Each on-street parking space dedicated to a shared car can benefit many people, including those who do not carshare.

Adam Millard-Ball, Gail Murray, Jessica ter Schure, Christine Fox, and Jon Burkhart. 2005. “Car-Sharing: Where and How It Succeeds,” TCRP Report 108 for the Transportation Research Board.

Andrea Osgood received her MA in Urban Planning at UCLA, and currently works on transit-oriented development for Eden Housing. This article is drawn from her MA research at UCLA, which won the Nevill A. Parker Award in 2007 from the Council of University Transportation Centers (andrea.osgood@gmail.com).