App-based, on-demand ride services—also known as Transportation Network Companies (TNCs)—have grown rapidly in recent years and caused debate in the passenger transportation industry. Advances in information and communication technology have enabled these services to provide a wide variety of real-time and demand-responsive trips. Companies such as Lyft, Uber, and Sidecar (now defunct) have developed smartphone apps whereby passengers can “source” a ride from a private passenger vehicle driven by a non-commercially licensed driver (usually). These apps communicate the passenger’s location to the driver via GPS and charge a distance-based fare. The driver is paid approximately 80 percent of the fare; the company keeps the rest. Many of these apps maintain a rating system that allows drivers and passengers to rate each other after the trip is completed. A passenger’s credit card information can be saved within the system to facilitate future trips.

Many terms have been used to characterize these app-based, on-demand ride services, but there has been little consensus on terminology. The California Public Utilities Commission (CPUC) was among the first to name these services Transportation Network Companies. CPUC has regulatory authority over TNCs to protect public safety in the State. Other names include ride-booking or ride-hailing and even ridesharing. Although ridesharing is used colloquially, the term has sparked controversy and confusion. The emerging app-based services have fundamental differences from traditional ridesharing (the grouping of travelers into common trips by car or van, whereby the driver has a common origin and/or destination with the passengers). To dispel this misunderstanding, we use the term ridesourcing to convey the essential technology—a platform used to “source” rides from a driver pool. Thus, we refer to these services as ridesourcing.

The Debate Over Ridesourcing

Ridesourcing has its roots in ridesharing and exhibits traits of traditional taxis. In some ways, ridesourcing may become more similar to ridesharing by allowing unrelated passengers to share a ride. However, in comparison to ridesharing, ridesourcing drivers typically do not share a destination with passengers. Instead, the driver’s motivation is income. To some, ridesourcing more closely resembles a taxi in that a driver offers a ride in exchange for a fare. Further blurring definitions, taxi companies are increasingly adopting app-based dispatch services known as e-Hail, and ridesourcing companies are launching services that more closely resemble ridesharing or microtransit (privately owned and operated shared transportation services with fixed, on-demand schedules, or both). Thus, complete characterization of ridesourcing is difficult because the services are quickly evolving.

Supporters view ridesourcing as an alternative to driving alone and as part of a suite of shared mobility options that serve previously unmet demand for fast, flexible, and convenient mobility in urban areas. Ridesourcing services have directly challenged existing regulations and practices that have over the years shaped the taxi industry, raising questions about appropriate regulatory and public policy responses. Moreover, critics argue that ridesourcing services compete with public transit, increase congestion during peak periods, mislead consumers through opaque pricing practices, and endanger public safety. As city leaders revise policies on ridesourcing services, there is an urgent need for independent analysis of their mobility and environmental impacts.

We studied ridesourcing’s role in urban transportation through an intercept survey of users in San Francisco. The findings provide an initial picture of the ridesourcing market.

Innovations in shared mobility have begun to outpace policy, particularly since ridesourcing services launched in San Francisco, California in Summer 2012. With murky definitions and limited understanding of public safety and transportation-related impacts, policymakers were compelled to consider whether these new services, which called themselves “ridesharing,” fell under the classical definitions of ridesharing or for-hire vehicle services.

The California Public Utilities Commission established a new category of motor vehicle carriers, known as Transportation Network Companies, in September 2013. A TNC was defined as an operator that “provides prearranged transportation services for compensation using an online-enabled application or platform (such as smartphone applications) to connect drivers using their personal vehicles with passengers.” Under the new rules, TNCs in California were required to obtain a license from the CPUC, conduct criminal background checks on all drivers, provide a driver training program, maintain a “zero tolerance” policy on drugs and alcohol, and secure adequate insurance coverage for drivers when the app is on. In 2014, California passed Assembly Bill (AB) 2293, which supplants the CPUC decision and incorporates many of CPUC’s rulemaking statewide.

The emergence of ridesourcing companies draws attention to gaps in the transportation ecosystem not quite met by the taxi and ridesharing market. Ridesourcing shares many characteristics with taxis, but it also has the potential to realize some ridesharing benefits. Since the initial CPUC decision, almost every US state has enacted legislation either to allow or limit ridesourcing, yet ridesourcing continues to pose a challenge for regulators.

The emergence of ridesourcing companies draws attention to gaps in the transportation ecosystem not quite met by the taxi and ridesharing market. Ridesourcing shares many characteristics with taxis, but it also has the potential to realize some ridesharing benefits.

In partnership with several researchers at the University of California, Berkeley, we conducted an exploratory study of ridesourcing users in San Francisco to begin answering policy questions. In May and June 2014, 380 complete surveys were collected from three ridesourcing “hot spots” in the city, including the Mission District, Marina District, and North Beach. To obtain an adequate response rate, intercept surveys were conducted between 6:30 pm and 9:30 pm from Wednesday to Saturday for approximately two months. Surveyors targeted two types of potential respondents: those who had just completed a ridesourcing trip (“intercept trips”) and those who had used ridesourcing within the last two weeks (“previous trips”). Both types responded to identical surveys. The survey asked 18 questions regarding trip origin and destination, trip purpose, previous and alternative modal choice, car ownership, and basic demographics. After survey completion, respondents received a $5 gift card to a local coffee vendor. The study compared ridesourcing survey data with three other datasets: (1) the American Community Survey (ACS) 2012 one-year estimates, (2) a survey of taxi users conducted for the San Francisco Municipal Transportation Agency (SFMTA) in early 2013, and (3) trip logs from a medium-sized taxi company in San Francisco from October 2013.

UberX provided over half of surveyed trips (53 percent), while Lyft provided 30 percent of trips, Sidecar provided 7 percent, and the remainder were other services. Respondents were 60 percent male and 40 percent female. Ridesourcing respondents were generally younger than frequent taxi users from the 2013 SFMTA survey. Respondents were also more highly educated relative to the citywide average; 84 percent had a bachelor’s degree or higher.

It is difficult to determine whether ridesourcing services induce travel. Table 1 displays results to the question: “How would you have made this trip if Uber/Lyft/Sidecar were not available?” Ninety-two percent stated they still would have made the trip, which suggests an induced travel effect of 8 percent. About one third would have made the trip by public transit (bus or rail). Four percent of all respondents named a specific public transit station as their origin or destination, which suggests that some individuals use ridesourcing to access public transportation. 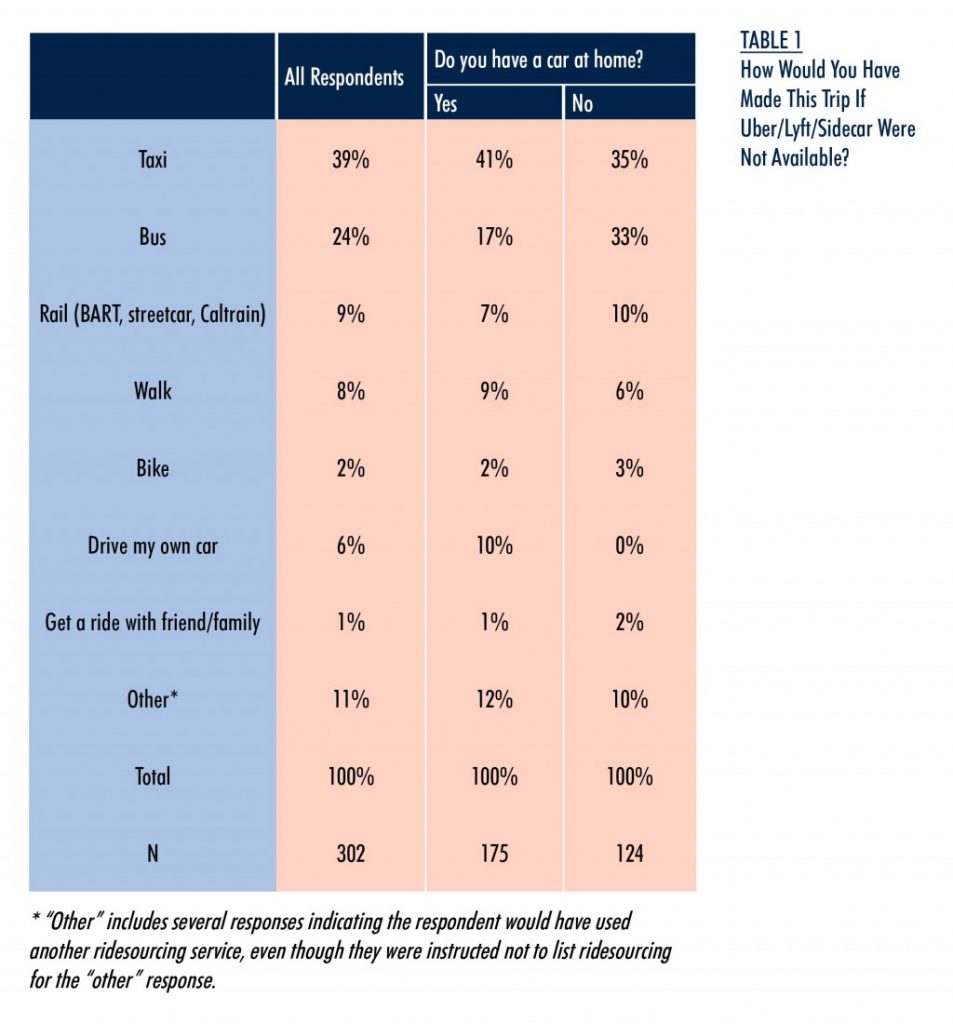 In terms of modal shift and safety, it is important to note that a small number of respondents (3 percent) said they used ridesourcing services to avoid driving after drinking alcohol, when they otherwise would have driven themselves.

Ridesourcing serves many residents who do not own a car, as those surveyed reported owning fewer vehicles than taxi users. Forty-three percent stated they did not own a vehicle at home, while 35 percent of taxi users reported being carless. Given that ridesourcing is still a new option to the urban transportation system, it is not surprising that 90 percent of vehicle owners reported they have not changed their ownership levels due to ridesourcing. Yet ridesourcing may allow users to drive less frequently—40 percent stated they drive less since starting to use ridesourcing. Thus, ridesourcing has the potential to impact vehicle miles traveled and vehicle ownership.

This study is not completely representative of ridesourcing trips and users, as it focused on three “hot spots” in San Francisco during evening timeframes. The majority of trips reported were for social/leisure purposes and under-represent other trip types (e.g., commutes, airport trips, errands). Given these limitations, this research is exploratory in nature. Nevertheless, it can help to guide future research.

This research presents ridesourcing in the context of classic ridesharing and taxi services in urban transportation and delineates the differences between each. At present, the policy discussion continues to evolve across the US at local and state levels, addressing issues of insurance coverage, driver and vehicle safety checks, and taxi competition. There were several key findings from our Spring 2014 survey of ridesourcing users in San Francisco: users tend to be younger, own fewer vehicles, and more frequently travel with companions than taxi users. Forty percent stated that they drive less due to ridesourcing. Notably, only 10 percent of ridesourcing respondents waited more than 10 minutes for a ridesourcing vehicle, while 65 percent of taxi uses waited more than 10 minutes on weekdays, and 84 percent waited more than 10 minutes on weekends. While ridesourcing competes with taxis (40 percent), it also competes with other modes (60 percent), including public transit, walking, private auto, cycling, and carpooling. It can also complement modes, such as public transit, as a first- and last-mile service and fill gaps in public transit networks. Furthermore, 8 percent of the trips reported were new trips that would not have been taken previously without ridesourcing.

As a relatively new transportation option with little publicly available data, ridesourcing is not yet well understood by policymakers, regulatory agencies, or academics. Future research should investigate ridesourcing with more representative data, such as ridesourcing trip and user data obtained directly from or with the help of ridesourcing companies. Future research could attempt to measure the induced travel effect or the longer-term impacts on other modes and vehicle ownership (including impacts on energy use and emissions), as well as equity. A study of ridesourcing driver motivations, behaviors, and travel patterns would be beneficial for expanding knowledge of the industry. Finally, researchers could begin to explore the impacts of enacted policies on insurance and safety to guide future policies as ridesourcing continues to evolve.

This article is adapted from “Just a Better Taxi? A Survey-Based Comparison of Taxis, Transit, and Ridesourcing Services in San Francisco,” originally published in Transport Policy.

The University of California Transportation Center and the Transportation Sustainability Research Center (TSRC) at the University of California, Berkeley generously funded this work. Thanks also go to our survey respondents and to the San Francisco Municipal Transportation Agency for providing us with taxi data. We are grateful for the many contributions made by our co-authors Professor Robert Cervero and Danielle Dai, as well as numerous students including Dylan Baker, Apaar Bansal, Shuchen Gong, Lindsay Lewis, Brandon Harrell, An-Yu Liu, Rebecca Lopez, Kevin Otis, Samuel Penny, Diwen Shen, Christine Vandevoorde, and Isabel Viegas. Ian Johnson helped with the taxi data analysis. The authors are responsible for the accuracy of the data presented herein.

Lisa Rayle is a Doctoral Candidate in City and Regional Planning at the University of California, Berkeley (lrayle@berkeley.edu).