Households without cars are typically urban, small, and still get around in cars.

Over the past thirty years the federal government has funded extensive programs to improve travel options for people who do not have their own vehicles. During this same period, independent of government actions, economic and demographic trends have diminished the target population and made vehicle access nearly universal, even among the poorest households. In 1969, 20.6 percent of households (HHs) had no vehicle. By 1983 this ratio had fallen to 13.5 percent. By 1990, it fell to 9.2 percent of HHs. Further, HHs without vehicles tend to be smaller than average, so in 1990 the zero-vehicle HHs comprised only 6.4 percent of the population.

The typical zero-vehicle HH (0-VHH) has no one in the labor force (neither employed nor searching for work), has a lower than average income, and is located in the central part of a large urban area. In life cycle terms, most of these HHs are either retired older people or single adults without children. Most zero-VHHs are headed by women.1 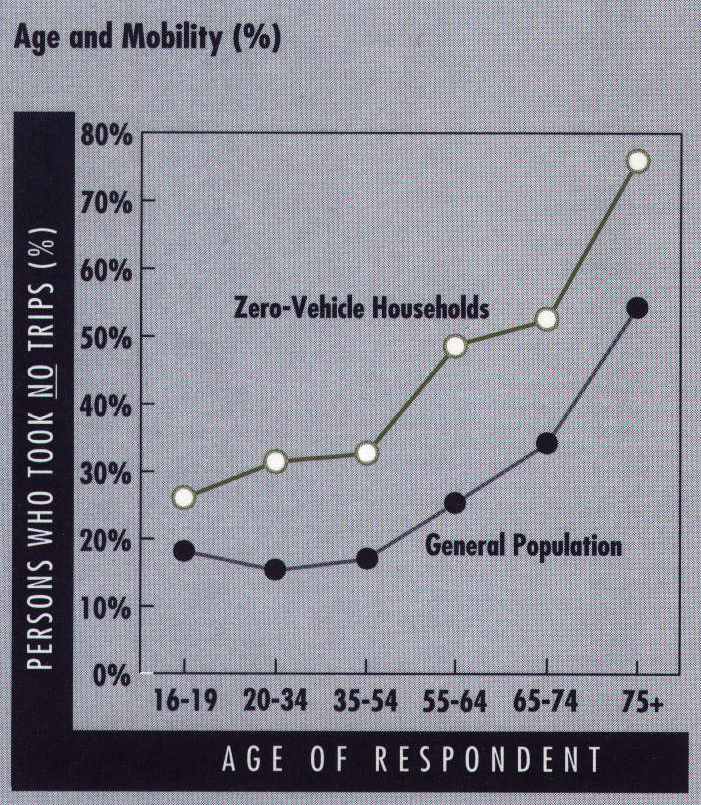 To the extent that federal policy seeks to assure mobility for all, it needs to concentrate more attention outside the central cities. 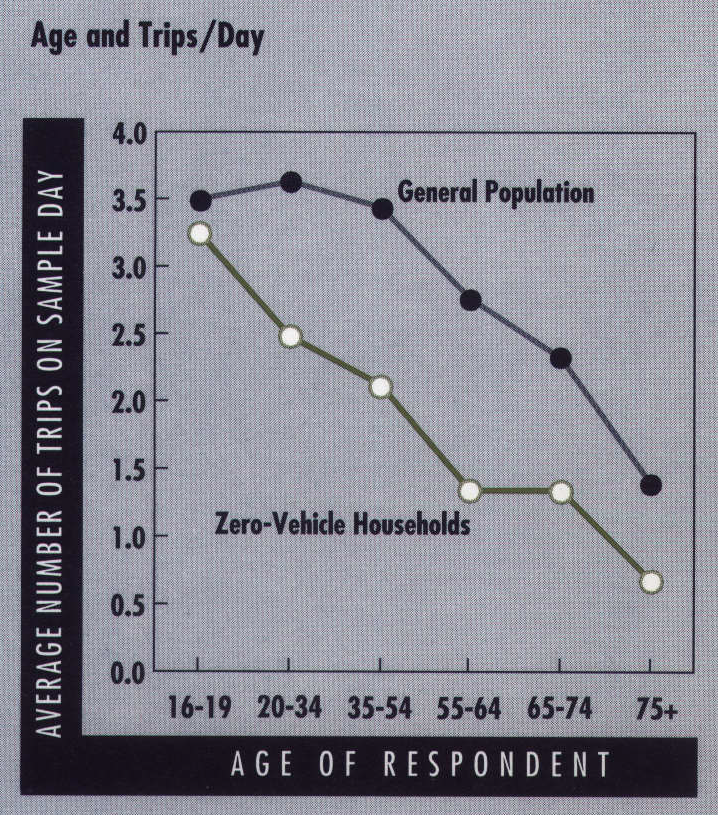 How Do They Travel? 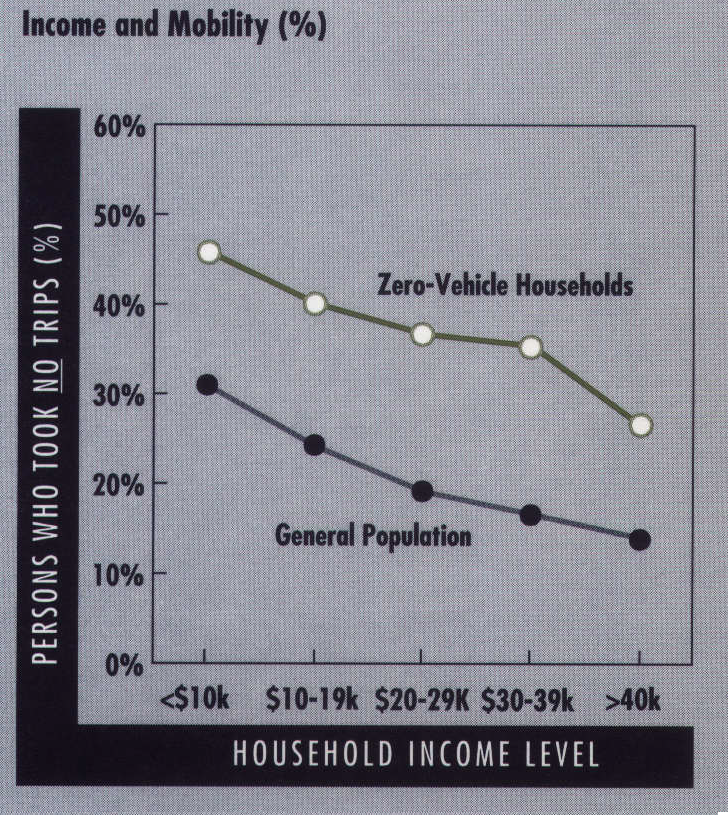 Surprisingly, adults living in HHs without vehicles make twice as many trips by private vehicle as they do on transit (36 percent versus 16 percent). The share of travel on public transportation is essentially constant across education levels, but the private-vehicle share declines as education increases, and the walk-mode share increases with education. Regarding trip purpose, the reason for travel tends to be about equally divided between errands, social activities, and shopping.

Mobility: How Much Do They Travel

From a social viewpoint, we are interested in seeing how well the people in zero-VHHs get around -whether they have enough mobility options to lead reasonable lives. One possible measure of mobility is the average number of trips per day made by persons in zero-VHHs. (A trip is a one-way journey; the roundtrip commute to work would be two trips.) The average adult living in a zero-VHH made 1.8 trips per day. The corresponding figure for the general population is 3.2 trips per day. This is a substantial difference, but it primarily reflects the different proportions of workers and the elderly in each group. 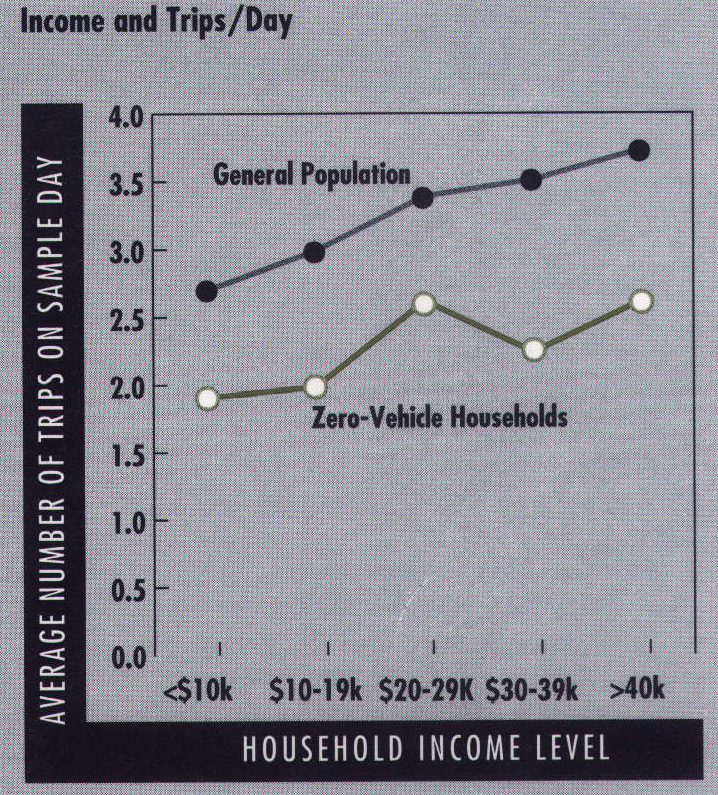 Another possible measure of mobility is the total absence of trip-taking on the sample day – the proportion of people who took no trips at all. Of all adults living in zeroVHHs, 46 percent made no trips during the sample day. The corresponding figure for the general population is 21 percent Again, a substantial difference in mobility, and again, much of it reflects the different proportions of workers and the elderly in the two groups. 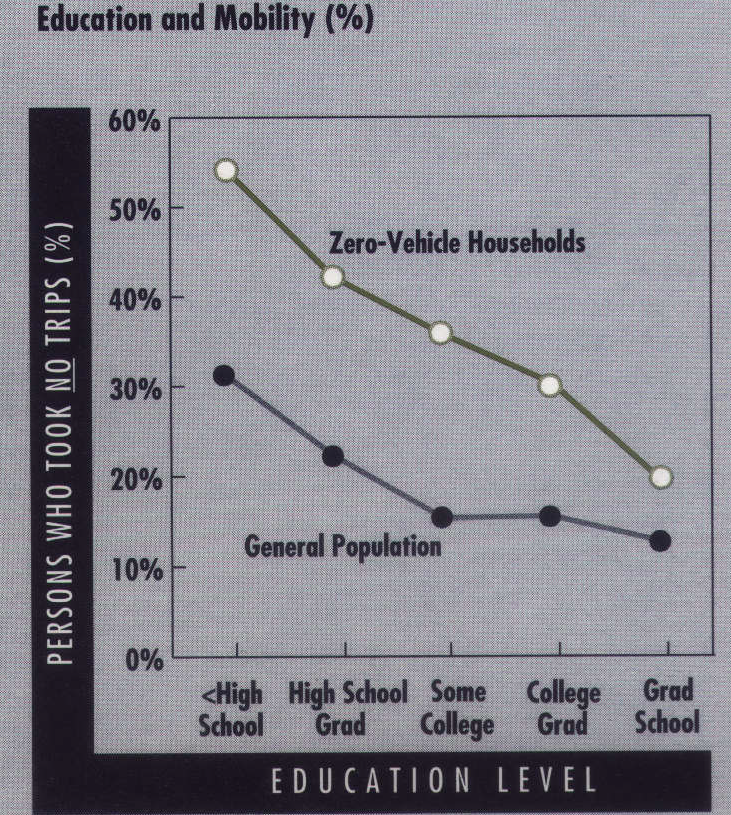 Persons sixty-five and older account for almost half of all zero-VHHs. Our major finding is that their travel is not affected by changes in most of the explanatory variables. For example, there is little difference in trips per day by gender, ethnicity, or across the observed ranges of income and education. 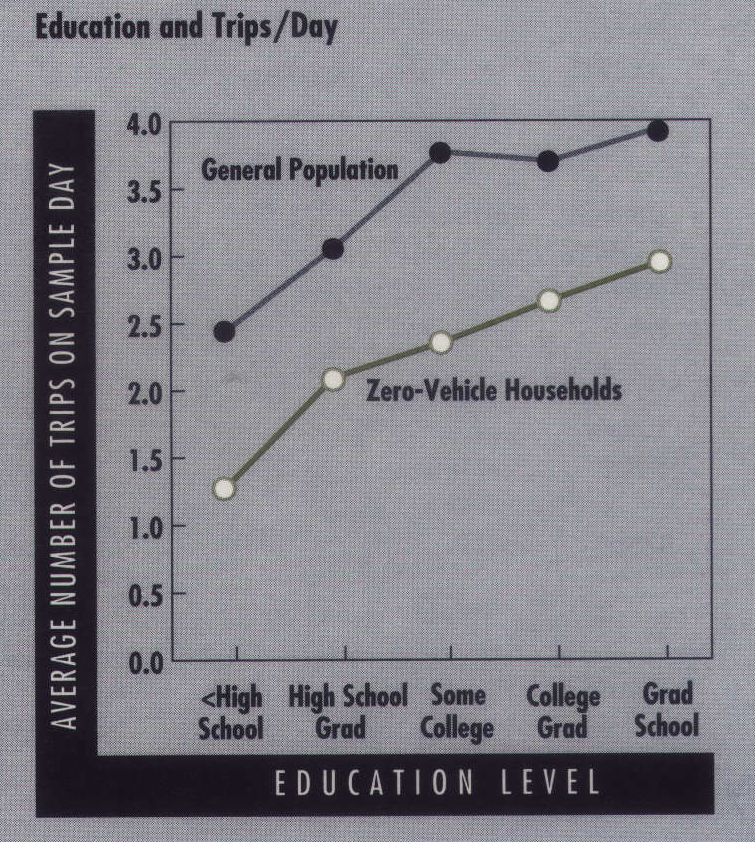 The geographic consistency is also quite striking. There is almost no difference in either trips per day or proportion of persons with zero-trips across the three MSA categories, the size of the urban area, or the population density.

New immigrants have much lower vehicle ownership rates than the native-born population, but vehicle ownership increases strongly with length of stay in the US. The fastest rate of change is for Asian immigrants, the slowest is for black immigrants. The change is inherently interesting because these immigrants come from cultures less auto-obsessed than our own. What explains the change in their vehicle ownership patterns over time? The data indicate that increased income, rather than any change in values toward the automobile, is the overwhelming factor behind the decline in zero-VHHs among immigrant groups.

This research was funded by a contract from the Federal Highway Administration of the US Department of Transportation. We owe special thanks to Susan Liss and Elaine Murakami for their support and advice.

Richard Crepeau is a research assistant professor with the Institute of Public Policy at George Mason University, Fairfax, VA 22030-4444 (rcrepeau@gmu.edu).