To implement road pricing, we need a policy that creates local winners.

Will toll roads ever become the norm, leaving “free” roads a distant memory? Now that new electronic toll-collection systems can collect fees from vehicles traveling at full speed, we must ask whether they inevitably will. People who believe technological developments compel institutional changes expect tolls will replace taxes in transportation finance. Those who believe institutional arrangements are independent of technological changes are dubious.

Recent articles in ACCESS have explored some of these prospects. Kenneth Small maintains new technologies will encourage tolls, including tolls that vary by time-of-day and by volumes-of-traffic—congestion prices. Klein and Fielding suggest that, by allowing single-occupant cars to save time by using relatively uncongested high-occupancy vehicle (HOV) lanes for a fee, lane-by-lane we could convert HOV lanes into high-occupancy toll (HOT) lanes. In contrast, Wachs argues that “the prospects for widespread adoption of congestion pricing are extremely limited” because only a small political constituency (principally transportation economists and planners) favors such pricing. 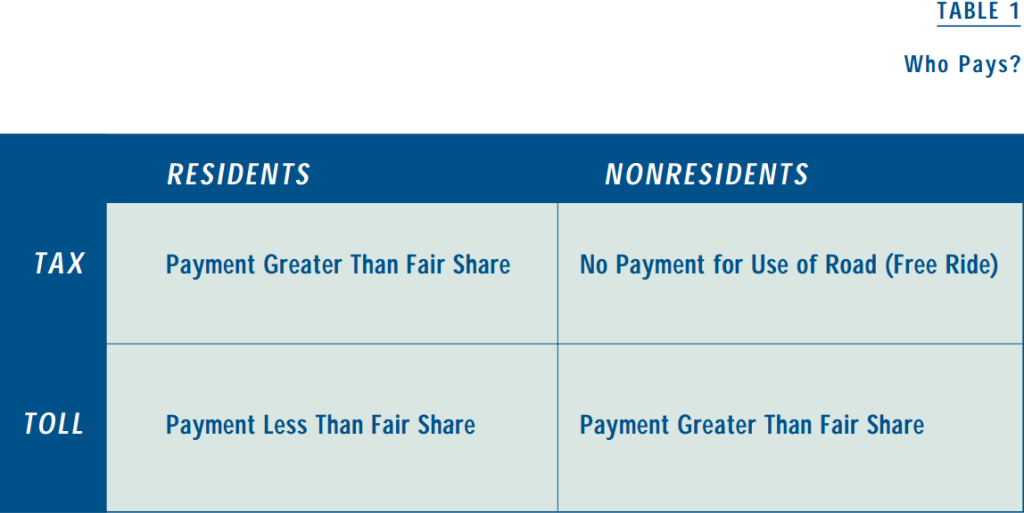 Many different services already have prices that vary by time-of-day, including telephones (cheaper evening and weekend rates), movie theaters (the matinee show), and restaurants (the early bird special). Giving discounts to travelers during the uncongested off-peak hours should attract less opposition than an extra toll on peak-period travelers. Setting the right tolls, so that time-of-day pricing is efficient without being too complex, is a challenging but surmountable problem.

New or widened roads can be financed either from tolls or from general revenue sources such as gas taxes. With completion of the Interstate system, localities must bear a greater share of new highway costs. But along with greater financial responsibility comes increased flexibility. While the federal government prohibited tolls on newly constructed Interstate highways, no such prohibition exists on locally funded roads. Besides producing otherwise unavailable funds, toll financing ties use closely to payment, and thus sends influential signals to drivers about whether to drive or not.

The toll roads that America use today have never been “free,” and so they’ve never faced the politically contentious problem of conversion. The success of converting free roads to tolls depends in part on how government spends the new toll revenue. Furthermore, while tolling may seem strange and new in a California that championed the freeway, it is one idea that moved from the East Coast westward.

Of course, just as there is no free lunch, there is no free way. The real issues are the directness of the charge and who pays it. Directness depends on whether government collects payments on each road segment, for every trip, at every fill-up of the gas tank, or once a year as a tax. Different individuals may pay more or less than their fair share. We call those who pay nothing for the use of the road “free riders.” Though the ride may be free to them, it costs someone else. So while there is no free way, some may take a free ride.

Riding Free And Taxing The Other Guy

States in the East continue to finance many highways with tolls, but Westerners do not. Clearly there are historical and political reasons for that, but underlying the history is a set of preferences that shape each state’s decision. In brief, preferences can be summed up by the folk aphorism, “Don’t tax you, don’t tax me, tax the fellow behind the tree.”

Local governments typically rely on a mix of revenue sources, each borne by a different set of people. For instance, taxes on car rentals, hotels, and entertainment are common in tourist areas. Speed traps adjoin major highways passing through small towns. Many conventional taxes cannot reach nonresidents who don’t have to pay local income, property, or sales taxes; but road tolls can. And the proportion of nonresidents using roads in physically smaller eastern states, or tourist areas like Florida, is greater than in the West. 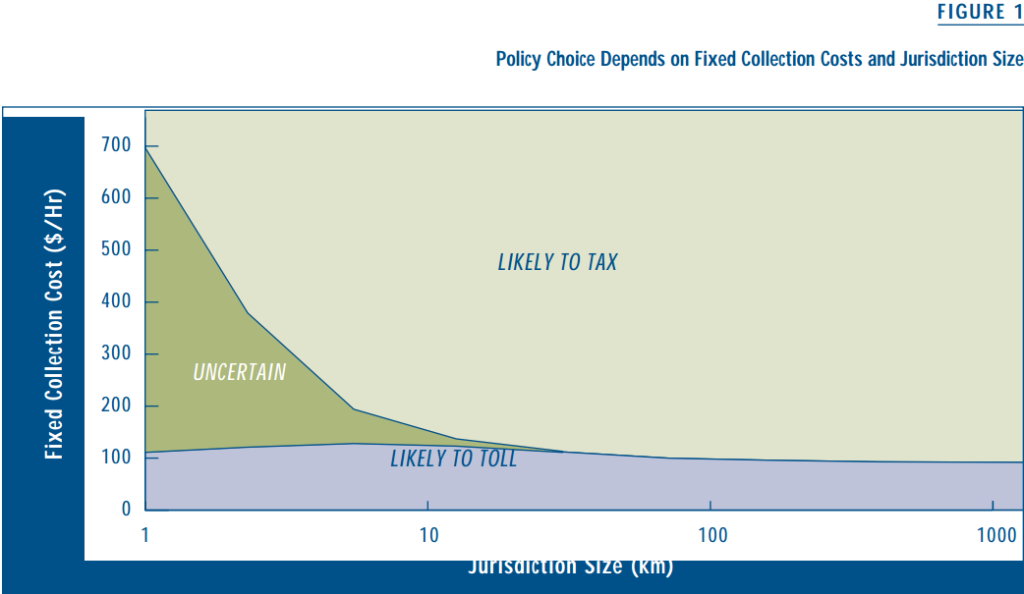 If a state places a tollbooth near the state line (referred to as a boundary toll ), it expects that at least half the tolls are paid by nonresidents. The proportion of tolls paid by nonresidents is higher than the share of total vehicle miles they travel. To understand the choice between taxes and tolls for highway finance, one must ask who gets to use roads without paying the full cost. In large localities employing boundary tolls, ever-more trips stay inside the boundary and thus do not pay tolls. However, under tax financing, the larger the community, the greater the share of travelers who do pay taxes. A tax-based financing system, particularly in a small jurisdiction, is inequitable to local residents—and may not be politically stable. On the other hand, a toll-based system is unfair to nonresidents, and therefore sidesteps the political problems.

My research reveals many reasons for localities to choose taxes or tolls of various kinds. I find that small political units have a greater motive to impose tolls than do large ones. The smaller the community, the greater the share of toll revenue from nonresidents. For large regions, tolls collected at the state or county line may prove insufficient to recover costs. However under the right circumstances, boundary tolls enable a jurisdiction to achieve the locally ideal policy of “taxing foreigners living abroad.” 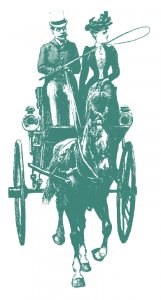 The first significant wave of turnpikes lasted from the 1700s and peaked in the early- to-mid 1800s. This era saw turnpikes under the control of local companies and trusts chartered by states (in the United States) or Parliament (in the United Kingdom). Before turnpike deployment, rural residents maintained roads often used by urban dwellers for intercity travel. Maintenance took the form of statute labor, the requirement to participate several days a year in a road gang that ensured the road was relatively smooth and properly graded. The wealthy could buy their way out of statute labor, an early form of road tax. Under the statute labor system, nonresidents neither paid local taxes nor worked to maintain local roads, and thus would act as free riders. With tolls, local residents often received discounts or paid one-time charges for using the roads.

Another significant wave of toll financing arrived with the arrival of grade-separated highways. As vehicles and highways improved, both travel speeds and trip lengths increased, as did trips between states. The divergence between taxpayers and road users led to the re-emergence of the free-rider problem. Since financing was at the state level, turnpikes were effective for collecting revenue from all users and mitigating the potential free-rider problem. Furthermore, unlike earlier roads, grade-separated roads can easily exclude nonpayers. Tolls can be cost-effectively assessed at each of the limited number of entrances, unlike roads without grade separation. But when federal financing became dominant with the 1956 Interstate Highway Act, the definition of “local” changed to include everyone in the nation. Congress preferred the revenue medium with lower collection costs (namely the gas tax) to tolls, especially since the goal was simply cost-recovery rather than profit. As a result, few new toll roads were constructed in the US during the Interstate era.

The likelihood that government will use tolls depends on whether local, state, or federal government controls the road network in a given area. It matters whether there is local control and multiple jurisdictions (for instance, different states) or a single central authority (such has the federal government) reigning over the road network. I assume that each locale acts to maximize benefits to its residents—a calculus I call local welfare. This measure explicitly excludes any benefits to nonresidents. Each community selects a revenue instrument (such as taxes or tolls) and sets a rate of tax or toll to achieve its goal. 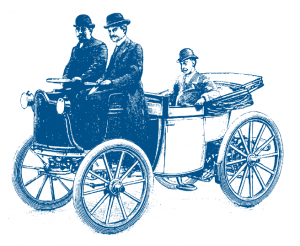 The interaction between multiple political units and their residents complicates the picture. Each jurisdiction’s residents use both local and non-local streets, while residents and nonresidents alike use its roads. The proportion of trips on a community’s roads made by residents and by nonresidents directly shapes the local welfare resulting from a particular revenue medium. This proportion depends on the size of the relevant city, county, or state. The choice between tax and toll must trade-off the number of system users who don’t pay their full cost because of where they live and travel, and the costs of collection. Travelers’ sensitivity to tolls limits the revenue recovered. The decision whether to impose taxes, tolls, or some combination of the two therefore depends on jurisdiction size.

Figure 1 illustrates a typical case. The horizontal axis arrays jurisdiction sizes. The vertical axis reflects the fixed costs of collecting tolls at a tollbooth ($/ hour). The net result is that small states are more likely to impose tolls to attain revenue from nonresidents, particularly on through trips. Large states are more likely to impose taxes or a combination of both taxes and tolls than to rely only on boundary tolls. This is because boundary tolls raise insufficient revenues to cover costs, since revenue levels off above some point. In uncongested conditions, use of interior (nonboundary) tolls usually does little to enhance local welfare because most additional revenue raised comes from local residents.

The original choice of the gas tax for highway finance relied upon certain underlying fundamental conditions. New trends are changing those conditions. These include increasing importance of social costs, shifts to alternative energy sources, rising congestion, scarcity of financial resources, emergence of new intelligent transportation technologies, and electronic toll collection. Further, changing priorities associated with a mature road network, from construction to maintenance, demand revisions to the existing highway finance system and its preferences for ribbon cuttings rather than repairs.

One reason jurisdictions choose tolls is to eliminate cross-subsidies between groups, particularly cross-subsidies paid by its residents for the benefit of nonresidents. The perception of cross-subsidy differs between small jurisdictions and large ones. Jurisdictions also choose tolls as a prerequisite to more efficient use of the roads, achieved through congestion pricing. One can reasonably argue that it’s not nearly as difficult to vary rates, once tolls are in place, as it is to initiate tolls (varying or fixed) on untolled roads. Over time, direct road pricing can provide off-peak discounts, and can thus be converted to time-of-day pricing, which is more efficient than fixed prices.

The path for implementing road pricing has been strewn with political potholes because pricing, particularly congestion pricing, inevitably produces winners and losers. It would be naive to believe that the institutional issues will be easily overcome. It will be difficult for Washington to devolve power to the states, or the states to the metro areas, cities, and counties. Nevertheless, to implement road pricing we need an approach that creates local winners. Decentralization of authority over roads is one such strategy.

Fielding, Gordon J. and Daniel B. Klein, “High Occupancy/Toll Lanes: Phasing in Congestion Pricing a Lane at a Time,” Working Paper, 1993, UCTC No. 179.

Levinson, David, “On Whom The Toll Falls: A Model of Network Financing,” Ph.D. Dissertation, University of California, Berkeley, UCTC Diss. No. 39.

Wachs, Martin, “Will Congestion Pricing Ever Be Adopted?” ACCESS No. 4, Spring 1994.

David Levinson is a post-doctoral researcher at the Institute of Transportation Studies, University of California, Berkeley, CA 94720 - 1720 (dmlevins@uclink4.berkeley.edu). He received the Ph.D. degree in civil and environmental engineering at UC Berkeley in June.