Melvin Webber was one of the original “bus guys” in the transportation planning field. He was one of the few to show respect for that Rodney Dangerfield of public transportation, the one that gets very little respect: the rubber-tire bus. But Mel’s vision of public transit was not stodgy old buses lumbering along city streets. He had in mind a more nimble, versatile form of transit—one that could compete with, and sometimes even mimic, the private car.

Mel Webber’s views about public transit are rooted in his seminal writings on the city-altering impacts of telecommunications, what he called the nonplace urban realm. Mel was the first person, I believe, to articulate the connection between dispersed urban form and the need for a more versatile, flexible form of public transit. In a landscape with endless numbers of trip origins and destinations, point-to-point technologies like rail transit, he reasoned, were anachronisms of the past. The geometry of traditional, downtown- focused, radial rail systems, Mel told us, does not square with the increasingly “many-to-many” geography of travel.

In addition to recognizing the mismatch between transit technology and urban form, Mel also got the order right. The changing cityscape should define transportation investments, not vice versa. It is a basic tenet that is often ignored, but Mel understood as much as anyone that transportation is mostly a means, not an end. We travel to get to places, not for travel’s sake, and those places are increasingly spread all over the map, courtesy of the powerful telecommunications revolution. Unfortunately, few urban policymakers heard Mel’s message and if they did, other considerations—like the prospects of attracting federal mega-dollars and creating political legacies through monumental rail investments—took precedence.

Mel got the order right: The changing cityscape should define transportation investments, not vice versa.

Over the past half century, decisions to move ahead with large-scale rail investments in US cities have been made with little attention to land-use patterns and unfolding travel trends. In the words of Sir Peter Hall, great planning disasters like BART were inevitable. BART of course was just the tip of the iceberg. Almost all of the twenty-plus light rail systems opened in North America since the early 1980s have suffered huge cost overruns and failed to come anywhere close to projected ridership targets. Despite well-meaning smart growth efforts, transit continues to lose market share in all but the very largest, most congested US cities. The nonplace urban realm has proven too powerful a determinant of travel behavior.

Mel Webber’s epiphany on why it’s important to achieve a “glove-in-hand” fit between urban landscapes and transit investments was expressed in numerous essays, including ones that appeared in ACCESS. The titles of these essays, “The Joys of Auto- mobility,” and “The Marriage of Transit and Autos: How to Make Transit Popular Again,” speak for themselves. But it was Mel’s penetrating analysis of the BART heavy rail investment that many view as his pièce de résistance on the subject.

When Mel wrote his provocative and rather scorching critique of the BART investment, “The BART Experience: What Have We Learned?” in The Public Interest in 1976, he had the benefit of twenty years of hindsight. Mel’s first major job upon graduating with a Masters in City Planning from Berkeley in the early fifties was to work for Parsons, Brinckerhoff, Hall, and MacDonald, Inc., BART’s master planners and builders.

Mel worked on the BART master plan, a beautifully crafted document, a well-worn copy of which, I’m proud to say, sits in my office at Berkeley. The plan is arguably the only time in the Bay Area’s history that there has been a cogently articulated vision of the transportation/land-use future. It calls for the Bay Area to become a “sub-centered metropolis”…“something between the tightly nucleated clusters which form the typical metropolitan areas of the East Coast and the vast low-density sprawl of the West Coast’s Los Angeles.” It waxes poetically that with BART’s coming, “mini-communities would mushroom around suburban rail stations.”

But hopes that BART might ease traffic congestion were dashed by what today is understood as induced demand. On BART’s traffic impacts, Mel wrote: “Traffic congestion within BART’s district is about where it was before. That’s in part because motorists who did switch to BART left vacant highway space that was then occupied by others, including those making trips they would not otherwise have made. It’s in part also because BART has drawn many of its riders from buses, thus displacing low-cost transit service with high-cost service, while not significantly affecting traffic congestion.”

Mel’s vision is uncannily similar to what is taking shape today.

It is axiomatic that what drives land-use change is not shiny space-age vehicles or political rhetoric but rather changes in accessibility—the ability to get to places people frequently want to go. Because there is a limited supply of places that are highly accessible, developers aggressively compete for choice plots of land, bidding up property prices and building as densely as zoning ordinances and market demand will allow. Mel eloquently tied BART’s failure to bring about hoped-for land-use changes to accessibility. He wrote: “BART may have contributed significantly to CBD growth, but it has not yet restructured the suburbs. New rail access at suburban stations added new accessibility as planned. But the increments proved to be insignificant in proportion to overall accessibility. As a result very few developers were enticed into seeking sites adjacent to rail stations. They sought good pieces of land accessible to the road network instead. It looks as though it is now simply too late to use limited-access rail transit as an instrument for inducing urban centering.”

Mel’s vision of how public transit systems of the future should look came out of the BART impact work. As mode-choice modelers well know, the scourge of public transit in America is the dreaded transfer—in techno-talk, we’re told the disutility of out-of-vehicle travel time is around three times that of in-vehicle travel time. Mel told us the same thing in his analysis of BART, though in a more digestible format: “Because BART is laid out essentially as a mainline railroad, rather than as a network of lines, very few people find either their origins or their destinations adjacent to stations. For most, a train ride requires a supplemental trip-leg, either by foot, car, or bus at either the origin end, the destination end, or both. Travelers find these supplemental trip-legs to be most onerous.”

The logical alternative to rigid fixed-guideway transit is something that is flexible, demand-responsive, and many-to-many in its service coverage. Mel’s vision presaged current-day interest in Bus Rapid Transit (BRT), with at last count over ninety BRT lines currently in operation or in the pipeline in the US.

For Mel, however, rail alternatives needed to go beyond 55-passenger buses. Among the swift-footed, atomized forms of mobility that blended the best of both worlds—tran- sit and the car—Mel saw a future of carpools and vanpools on dedicated lanes, private jitneys that go when and where customers want (as in much of the developing world), and electronic hitchhiking. Mel’s vision is uncannily similar to what is taking shape today. 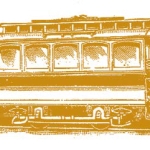 Webber’s future-casting talents are perhaps best revealed in “The Marriage of Transit and Autos.” There he wrote: “We can now foresee metropolitan-wide transit systems, each focused on Transport Central’s computer. A person wishing to go from here to there at a specified time phones the transport help line, say “711,” and places a request by punching the phone buttons. The computer then searches for a neighbor traveling at that time to that place and willing to share an empty seat for a fee. If none is found, it searches for the nearest publicly or privately owned bus, or van, or taxi, which it sends to the caller’s front door.”

While in the early 1990s Mel might not have foreseen the coming of the Internet, cellular phones, and WiFi technology, and was slightly off the mark (though only by a single digit) with his suggested dial-in number, he more or less got it right. Go to the website of 511.org, serving the San Francisco Bay Area, and what you’ll find before you is a menu of mobility options, including BRT and self-help ridesharing. It’s just a matter of time before Webber’s fuller vision of auto-like mass transportation, complete with door-to-door paratransit and real-time hitchhiking, is a reality.