R&D is integral to innovation and yet given fewer resources each year.

The federal government and private industry are both reducing their investments in energy research and development (R&D) at a time when geo- politics, environmental concerns, and economic competitiveness call instead for a major expansion in US capacity to innovate in this sector. The 2005 federal budget reduced energy R&D by eleven percent from 2004. The American Association for the Advancement of Science projects a decline in federal energy R&D of eighteen percent by 2009. Meanwhile, investments in energy R&D by US companies fell by fifty percent between 1991 and 2003.

This decline occurred despite numerous calls from expert groups for major new commitments to energy R&D. A 1997 report from the President’s Committee of Advisors on Science and Technology and a 2004 report from the bipartisan National Commission on Energy Policy both recommended that federal R&D spending be doubled.

A comparison with the pharmaceutical industry is revealing. In the early 1980s, energy companies were investing more in R&D than were drug companies; today, drug companies invest ten times as much in R&D as do energy firms. Total private sector energy R&D is less than the R&D budgets of individual biotech companies such as Amgen and Genentech. The nation’s ability to respond to the challenge of climate change, and to the economic consequences of disruptions in energy supply, has been significantly weakened by the lack of attention to long-term energy planning. 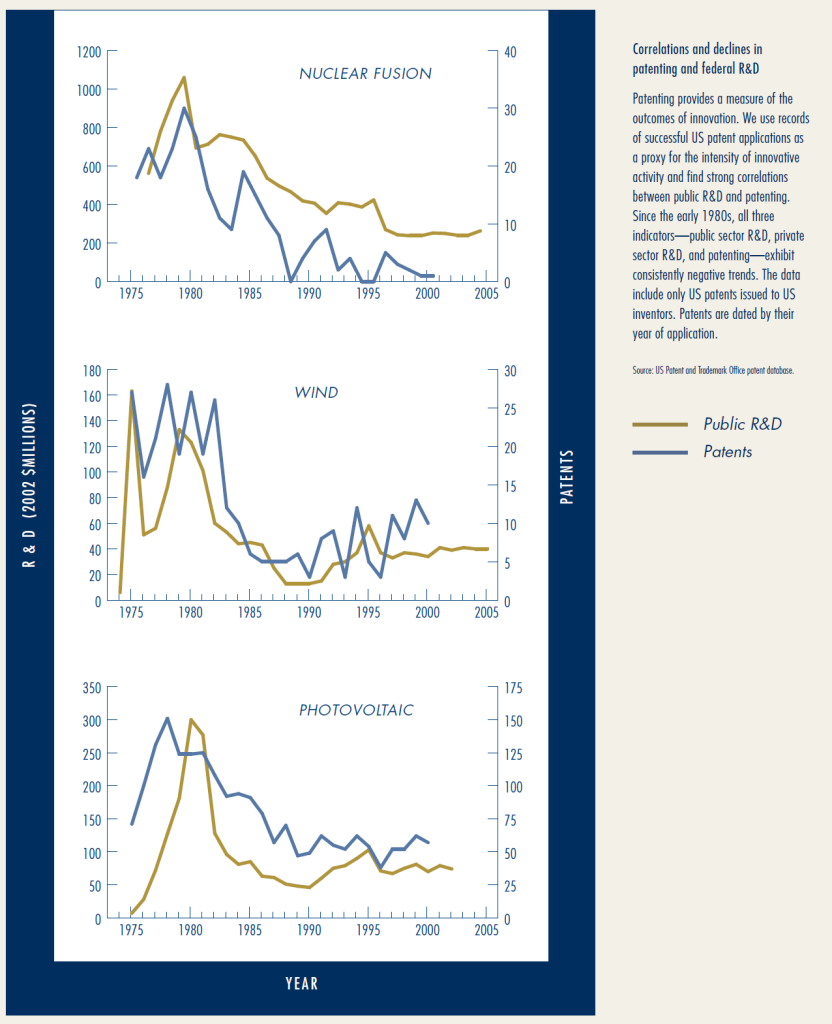 Comparison to previous major government research programs suggests that a serious federal commitment to energy R&D could yield dramatic results.Using emissions scenarios from the Intergovernmental Panel on Climate Change and a framework for estimating the climate-related savings from energy R&D programs developed by Bob Schock from Lawrence Livermore National Laboratory, we calculate that energy R&D spending of $15 to $30 billion/year would be sufficient to stabilize CO2 at double pre-industrial levels. This five- to ten-fold increase in spending from current levels is not a “pie in the sky” proposal; in fact it is consistent with growth seen in several previous federal programs, such as the Apollo Program, which took place in response to clearly articulated national needs. In the private sector, US energy companies could increase their R&D spending by a factor of ten and would still be below the average R&D intensity of US industry. Past experience indicates that higher investments would be repaid several times over in technological innovations, business opportunities, and job growth. The recent $500 million agreement between British Petroleum and several universities, which established the Energy Biosciences Institute at UC Berkeley, is a step in the right direc- tion. But it falls far short of the level of funding that’s both needed and possible.

R&D investment is an essential component of a broad innovation-based energy strategy that includes transforming markets and reducing barriers to the commercialization and diffusion of nascent low-carbon energy technologies. The economic benefit of such a bold move would repay the country in job creation and global economic leadership, building a vibrant, environmentally sustainable engine of new economic growth.

Daniel Kammen is professor in the Energy and Resources Group, and in the Richard and Ronda Goldman School of Public Policy (kammen@berkeley.edu).

Gregory F. Nemet (gnemet@wisc.edu) is Associate Professor at the Gaylord Nelson Institute of Environmental Studies, and at the La Follette School of Public Affairs at the University of Wisconsin at Madison.