The Social Context of Travel

Imagine two young families living next door to one another in an apartment building in the Castro district of San Francisco, one of the most well-known gay neighborhoods in America. The two families are alike in most regards, but one couple is straight and the other is gay. Neither have children. They have similar jobs and incomes, and they both like living in a dense urban environment. Their daily travel patterns, however, are very different. The gay couple’s trips to work, shops, restaurants, bars, and friends’ houses are more local than that of their straight neighbors down the hall. 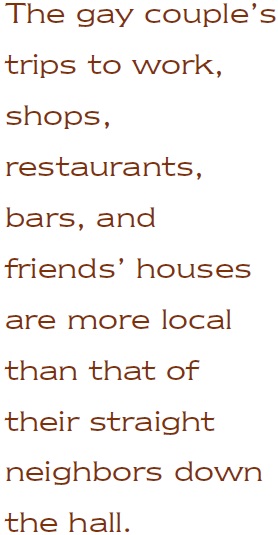 In our research, we find evidence that this is not just a hypothetical situation; gay couples living in gay neighborhoods across America do stay closer to home than their straight neighbors. Why might this be? We believe that these differences stem from the social context of the neighborhood. Our imaginary gay couple has chosen to live in a neighborhood where a lot of other gay people live. They may already have a network of gay friends and
acquaintances in the neighborhood, and if not, they are likely to develop one. Businesses in the Castro cater to them, and gay social and cultural institutions abound. There is even a niche economy that provides jobs to gay people.

The above scenario is only one example where the social context of a neighborhood can influence activity and travel patterns. We call these “neighborhoods of affinity,” where members of a group with strong social ties live and work. Other examples of these neighborhoods include immigrant enclaves and religious communities. 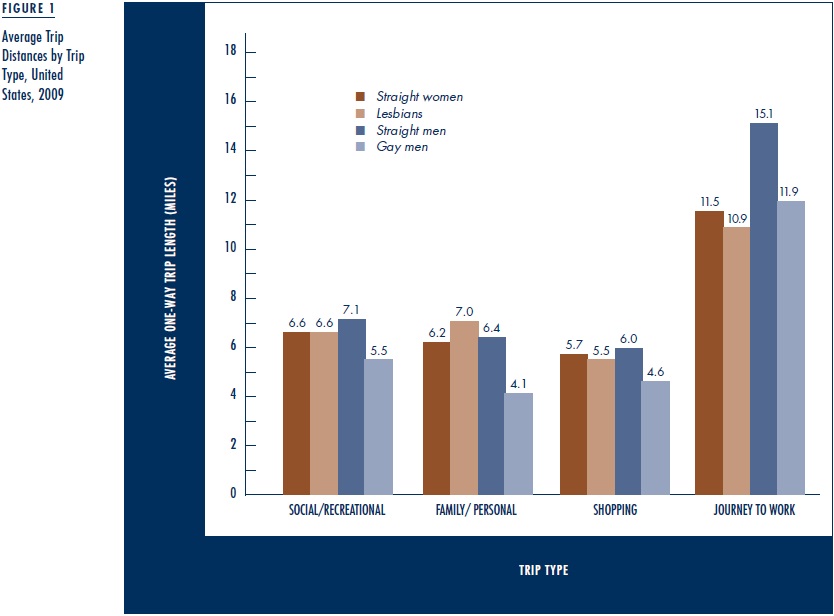 There is mounting evidence that a neighborhood’s social fabric helps shape some residents’ activity patterns and travel decisions. For example, previous research finds that many immigrant neighborhoods function as cities-within-cities, and that immigrants living in these enclaves are more likely to use transit, walk, and bike. This finding holds even in suburban neighborhoods, where the built environment typically caters to driving.

To study the effect of social contexts on activity patterns, we use data from the nationally representative 2009 National Household Travel Survey (NHTS). This dataset provides information on both households and individuals, and the work and non-work trips they make over the course of a day. Like most large-scale public surveys, the NHTS does not ask questions about sexual identity or orientation. In order to identify gay men and lesbians, we used a common approach, first identifying married or coupled households (distinct from roommates) and then categorizing these couples as either same-sex or different-sex. Because we do not know the sexual orientation for singles, we omitted them from our analysis entirely.

The NHTS data reveal substantial differences in travel patterns for same-sex and different-sex couples, and these differences partially support our hypotheses. Figure 1 shows that gay men, but not lesbians, make considerably shorter trips than lesbians and straight people. The differences are particularly stark for non-work trips.

Of course, gay, lesbian, and straight households tend to be different in other ways as well. These differences may help to explain the variation we observe in travel distance, so we control for them in a series of models. Table 1 summarizes a few of the factors we examine. For instance, gay men have slightly higher incomes than do straight couples and lesbians. However, gay couples in our sample are far less likely to have children (only 9 percent do in our sample) than are straight (roughly 44 percent) and lesbian couples (39 percent). Gay men are far more likely to work in professional jobs, while lesbians are overrepresented in sales, service, manufacturing and construction jobs. Some of the most striking differences between same-sex and different-sex couples are geographic. Gay men in particular are far more likely to live in large metropolitan areas; just over half live in places with more than three million inhabitants, compared to roughly a third of straight couples and only a quarter of lesbian couples. At the neighborhood scale, gay couples tend to live in much denser areas, both in terms of residents and jobs, than straight and lesbian couples. Finally, gay men own fewer cars, on average, than others.

For gay men, we find that living in a gay or lesbian neighborhood leads to non-work trips that are significantly shorter in distance. Notably, this effect increases as the concentration of same-sex households in the neighborhood increases, and remains even after controlling for other variables such as residential density. Our research suggests that coupled gay men living in neighborhoods where 10 percent of the households are same-sex couples have 53 percent shorter non-work trips than gay men who have no same-sex partnered neighbors. We also find a neighborhood effect for lesbians and straight couples, though it is much smaller than the effect for gay men (Figure 2).

This research suggests that, when it comes to travel decisions, being connected to your neighborhood matters. The social fabric of a neighborhood, in conjunction with the built environment, helps shape the activity and travel patterns of people who live and work there. For urban planners and policy makers, our findings suggest that building a light rail line or investing in bike lanes and pedestrian infrastructure may lead to very different outcomes depending on the community’s connection to nearby amenities and their neighbors. Some interventions aimed at increasing the use of alternative modes of travel may even be counterproductive if they disrupt the social fabric of the neighborhood. 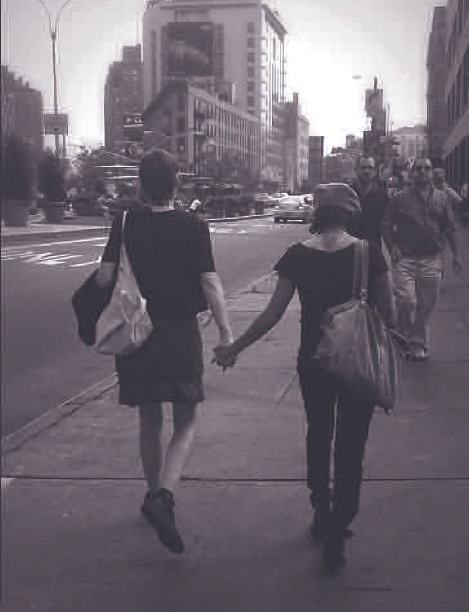 Transportation planners too often view neighborhoods principally as physical places, and a great deal of recent transportation research has explored only the connection between the built environment and residents’ travel choices. Street and sidewalk widths, residential and employment density, tree cover, bike lanes, and other physical aspects of the neighborhood are all linked to activity and travel patterns. While planners also have a long tradition of seeing neighborhoods as social phenomena, transportation scholars have paid little attention to how social networks embedded in places can shape activity and travel patterns. But there is mounting evidence that these forces play an important role in shaping these patterns. The case of gay couples living in gay and lesbian neighborhoods suggests that strong social ties can lead to travel patterns that are considerably more local—something many planners aim to achieve with countless policies and plans.

This article is adapted from “Neighborhoods of Affinity: Social Forces and Travel in Gay and Lesbian Neighborhoods,” originally published in the Journal of the American Planning Association.

Michael Smart is Assistant Professor at the Edward J. Bloustein School of Planning and Public Policy at Rutgers.