Everyone knows that being stuck in traffic is stressful, and few look forward to long commutes on congested roadways. But the negative effects of traffic congestion go beyond frustration and fatigue. Our research at UC Irvine since the late 1970s has discovered adverse health impacts of what we call “high impedance” commuting.

Our studies have been aimed at determining whether commuting really does lead to stress, and then to identify the exact causes of stress. We find that traffic congestion is indeed stress inducing by virtue of the physical and perceptual dimensions of travel impedance. Physical impedance is objectively measured, reflecting the distance and time spent on the journey, along with the number of roads and freeways traveled on the trip. Time of day is also a factor: congestion is normally greater in the evening peak hours, when induced stress is compounded by fatigue from the workday. We find that commuting distance is directly related to blood pressure – the longer the distance, the higher the commuter’s blood pressure. High levels of physical impedance are also related to lower tolerance for frustration, to negative mood at the workplace, and to illness. For example, the more roads traveled by commuters, the more times they will call in sick at work. 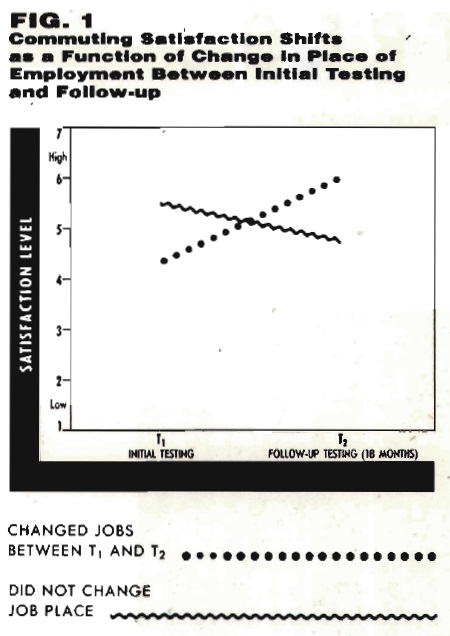 Recently we have begun to pay greater attention to the perceived dimension of commuting constraints – what we call subjective impedance. It is measured by clusters of questionnaire items in various formats. We find subjective impedance is related to illness, chest pain, job choice, and residential satisfaction. Among the strongest findings are its effect on negative mood at home in the evening. Our ongoing research seeks to understand more fully the factors involved in these psychological effects of traffic congestion.

Documenting the social costs of traffic congestion involves moving beyond simple intuitions. While it may seem obvious that chronic exposure to traffic congestion is stressful, the specific psychological and physiological effects are far from obvious. It is quite a puzzle to determine which conditions will lead to significant differences in observable stress among which people. Furthermore, before we can say that the observed stress is due to commuting, we must scientifically control for many other factors, such as the person’s physical characteristics, income, education, home life, and work environment.

For example, you might think that long distance commuting (driving 20 miles or more) would lead to increased heart rates or to decreased positive mood at work. You might also think that people with Type-A personalities who have long commutes on congested roads would be the most stressed. While these seem to be reasonable intuitions, we do not find any of them to be true.

We do find that blood pressure is affected (statistically controlling for age, weight, smoking, exercise, and medication), but not heart rate. Similarly we find that a congested commute increased negative moods (tension, nervousness, impatience, and irritability). But we have never found significant decreases in positive moods. And while we first hypothesized that Type-A personalities with long commutes would be the most stressed, our studies show that Type-B individuals (more relaxed, easy-going personalities) are most negatively affected. It turns out that the personality factor is a dynamic variable affecting residential choice, job involvement, and what one does in the car. Long-distance Type-A commuters exercise more control in selecting their residences, are more involved in their jobs, and tend to think about work during the commute instead of paying attention to the traffic.

The demographic group with the most commuting stress is that of female solo drivers having long-distance commutes. Although they have the highest family income of all groups in our studies and are most involved in their jobs, they report less choice among residential locations and feel rushed in getting to work each morning. Because we find no differences between males and females in the objective characteristics of their commutes ( distance traveled, time of commute, roads used, and intermediary stops, we are now studying whether the higher stress rate among women is due to role strain (an overload of demands at home and at work or to other factors.)

Our most recent study examined the potential stress-mitigating effects of ridesharing. We studied solo drivers, carpoolers, and vanpoolers – all with commute distances of more than 15 miles. Based on multiple testings at work sites, we find that female ridesharers have lower stress than do female solo drivers. Of the ridesharing groups, passengers consistently have lower blood pressure than drivers. Male passengers and female rideshare drivers not only have significantly lower blood pressure than solo drivers, but they also perform better on mental tests – digit copying, digit recall, and proofreading. 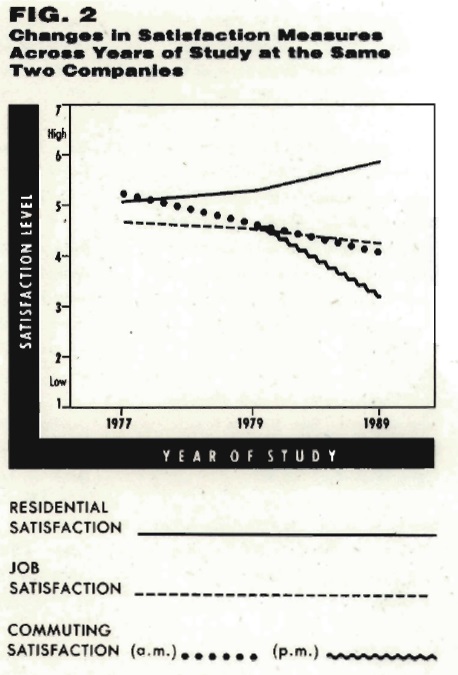 Our studies of commuting stress reveal substantial hidden cost associated with commuting. Figure 1 illustrates these hidden costs of commuting, both to the worker and to the business organization, pertaining to job change and commuting satisfaction. The commuters in this study worked at companies in the Irvine Industrial Area, and they participated in a two-phased project that had an initial testing phase and a follow-up 18 months later. During this interval, 14 percent of the participants changed jobs to new locations.

Intensifications in commuting dissatisfaction over time can be seen in a comparison of these three satisfaction measures (commute, job, and residence) in 1977, 1979, and 1989 when employees of the same two Irvine companies participated in our research. Figure 2 shows that, while the level of residential satisfaction reported in 1989 was somewhat higher than in previous years and job satisfaction was slightly lower (neither to a statistically significant degree), the level of commuting satisfaction dropped quite significantly, especially for the evening commute. Thus, for these samples of commuters from the same two companies, dissatisfaction with commuting intensified, but not with the job or residence.

Dissatisfaction with the commute is a cost the employee absorbs, often with delayed effects on health and well-being. Our research found there are strong spillover effects of this aspect of subjective impedance on home life. Employee turnover negatively affects the work organization as well. People will change jobs to cope with traffic congestions, but commuting stress is more often manifested in illness-related absence from work, employee turnover, and reduced levels of productivity and morale.

The findings from this program of research on commuting stress should alert businesses and social institutions to adverse consequences of commuting, providing another incentive for organizations to encourage workers to try alternative modes of transportation. Our preliminary results suggest that ridesharing has benefits for well-being, but these findings require corroboration and a larger investigation. We find that commuter interest in company-sponsored vanpools has increased significantly over the period of our research. We are now beginning a study on the psychological effects of commuting by that mode.

Raymond W. Novaco, a psychologist, is professor in the School of Social Ecology, University of California, Irvine, CA 92717.