Americans often look to South California as a place where lifestyle trends are born. Now, ironically, the land that has long glorified the car culture is galvanizing commuting behavior and encouraging

abstinence from the once respectable custom of solo diving. The catalyst for this behavioral change is Regulation XV, adopted by the South Coast Air Quality Management District in 1987. Also known “The Commuter Program,” Regulation XV requires all public and private employers (firms, government agencies, schools, hospitals, etc.) with at least 100 employees at any work site to devise commute alternatives for employees and to reduce the number of people driving alone to work.

Regulation XV is part of the regional plan for meeting federal and state air quality standards in the auto-dependent Los Angeles area (Los Angeles, Orange, Riverside, and part of San Bernardino counties) where topography, prevailing winds, ad extended daylight hours all contribute to its infamous smog. Soon, nearly a dozen American cities will adopt their own versions of Southern California’s ridesharing ordinance. The Clean Air Act Amendments of 1991 require that other “non-attainment areas,” (regions with air quality rated severe or extreme), enforce mandatory ridesharing programs at all work sites with 100 or more employees. The overall effectiveness of Regulation XV will be of national interest since it will serve as a prototype for other cities. We have monitored the program since its inception, and preliminary results of the regulation’s impact on ridesharing behavior are quite encouraging.

Companies falling within the Regulation XV guidelines must submit an implementation plan within 90 days of notification and must designate and train an on-site Employee Transportation Coordinator. In the plan, which must also be approved by the district office, the employer outlines a strategy for increasing Average Vehicle Ridership (AVR ) to a specified level over the first year. AVR is the ratio of peak morning commuters to the total number of cars driven by these employees. One year after the plan’s implementation, the employer must recalculate the AVR of its workforce. If the company fails to meet its target AVR, it is then required to revise the plan and implement the revisions during the second year. Failing to reach the AVR goal is not a violation of regulation; failing to implement the plan, though, is punishable by fine. So far, fines as high as $150,000(a major retailing chain was the guilty party) have been lieved against companies that failed to fulfill their obligations under the regulation. 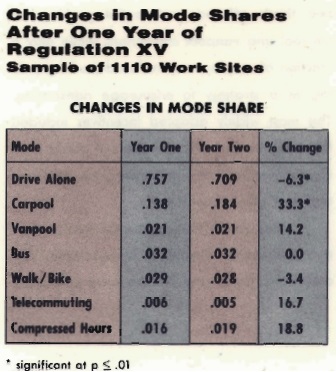 We monitored the progress of some 1,110 job sites subjected to the regulations for at least one year. Data collected by the district office helped evaluated whether AVR targets were being met. We also examined the role of the Employee Transportation Coordinator.

Preliminary analysis shows the level of solo commuting has diminished. Average vehicle ridership figures rose from 1.21 to 1.25, a statistically significant improvement. Of the job sites monitored, more than two-thirds experienced AVR increases during the first year, and one-fifth of the job sites have AVR growth of more than 10 percent. Carpooling was the most popular commute option, and vanpooling also increased significantly. As a transportation method, sharing rides makes sense: it is the alternative least disruptive to existing organizational patterns, and there are many ridesharing agencies and consultants able to provide matching services. However, the number of employees walking, cycling, and using public transit did not increase.

Generally, the greatest improvement in AVR was among employers whose initial AVRs were quite low. We also found that numbers of workers at different job sites had little to do with levels of AVR improvement.

Among the firms sampled, more than two-thirds offered preferential parking for carpool and vanpool commuters, while only a fraction of employers introduced parking pricing as a strategy to encourage ridesharing. The most widely adopted incentives included financial reimbursement to users of public transit, a guaranteed ride-home program, and promotional prize drawings. 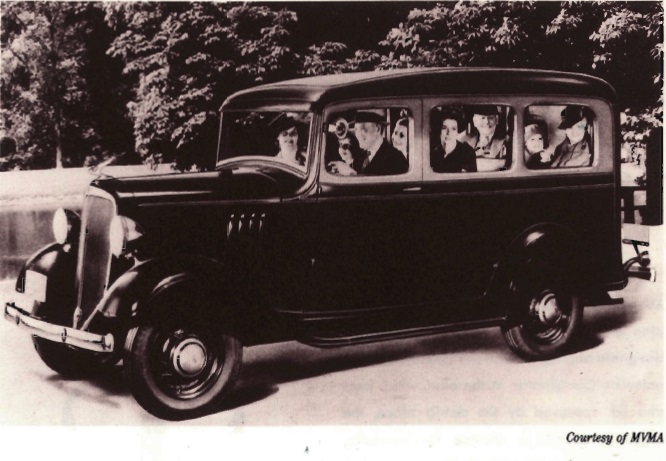 Regulation XV has created thousands of new positions for Employee Transportation Coordinators. Some coordinators have participated in formal training programs; still others have formed professional organizations. A telephone survey of 200 coordinators found that more than 90 percent were employees of their firms prior to adoption of Regulation XV.

Despite the rigid requirements, the amount of effort devoted to ridesharing by most employers has been modest. One-third of coordinators surveyed estimated that their employers spent less than $10,000 per year on the alternative commuting program. Almost half said they devoted less than 10 percent of their time to ridesharing duties.

Our research also includes in-depth case studies of five companies, aimed at examining the organizational and institutional benefits and costs of Regulation XV as well as ways to estimate the impacts of the regulation on vehicle miles traveled. These components of the study are still underway.