Down to the Meter: Localized Vehicle Pollution

Air pollution control programs have helped improve many aspects of regional air quality over the past thirty years despite tremendous growth in both population and vehicle-miles traveled. However, regional strategies to confront vehicle-related pollution are proving to be insufficient to protect the health of those who live, work, attend school, or play near major roadways. Recent air pollution and epidemiological findings suggest that harmful vehicle-related pollutants and their associated adverse health effects concentrate within a couple hundred meters of heavily traveled freeways and thoroughfares. We’re just beginning to understand the health and economic costs of such localized effects, and we still know little about who is exposed to these pollutants.

Recent field studies indicate that vehicle-related pollutants such as ultrafine particles, black carbon, and carbon monoxide are highly concentrated immediately downwind from major road- ways. Their relative concentration declines by as much as sixty percent at 100 meters downwind, drops to near background levels at about 200 meters, and are indistinguishable from background ambient concentrations at 300 meters. Among vehicle-related pollutants, ultrafine particles are especially worrisome since they are capable of penetrating cell walls and the blood-brain barrier and can be easily absorbed into vital organs. Diesel exhaust particulate is also a great concern as evidence is rapidly accumulating that subjects who live near roadways with a high volume of diesel vehicles are more likely to suffer from respiratory ailments, childhood cancer, brain cancer, leukemia and higher mortality rates than people who live more than 300 meters away from such roadways. Vehicle-related air pollutants have also been associated with respiratory illness, impaired lung function, and increased infant mortality. A Los Angeles County study found that pregnant women who reside within 750 feet of heavily traveled roads face a ten to twenty percent higher risk of early birth and low-birth-weight babies.

Although we know there are high concentrations of pollutants close to major road- ways, it’s harder to measure an individual’s exposure because of where and when activities take place. Indoor pollutant concentrations are mediated by numerous factors including a building’s ventilation and pollutant decay rates; in-vehicle concentrations are related to the exhaust of vehicles in front and to traffic densities. Individual exposure is also determined by activity level and breathing rate. For instance, young children have high breathing rates and therefore inhale a relatively larger volume of pollutants than older children or adults. Even a part of the day spent playing outdoors downwind of a major roadway could comprise a significant proportion of a child’s overall daily exposure to air pollution, given the higher rate of inhalation during moderate or vigorous play.

These factors are important for understanding the magnitude of health risks near major roadways and for developing appropriate policy responses and strategies to mitigate them. Because direct measurement of pollutant levels and individual exposure is expensive and difficult, researchers are learning to model individual- and neighborhood-level exposures to air pollutants to understand how they are affected by time of day, activity, and travel patterns.

The health effects of near-roadway vehicle-related pollutants are likely to be unevenly distributed across communities. Our recent finding that minority and high-poverty neighborhoods in Southern California bear over twice the level of traffic density as the rest of the region suggests that those who spend time in these areas may be disproportionately exposed to concentrated air pollution, and therefore at higher than average risk for chronic illness, lung impairment, and mortality. The same areas have been plagued in many cases by residential segregation, disinvestment, declining property values, deteriorated housing, limited business opportunities, insurance redlining, and poor schools. Such communities often have a disproportionate level of nearby environmental hazards.

Minority and high-poverty neighborhoods in Southern California bear over twice the level of traffic density as the rest of the region.

While residents of affected areas may benefit from the access provided by nearby roads, this benefit may not be proportional to the health burden they bear. Living in dense areas near major roadways can offer a number of benefits, including accessibility and affordable housing. The transportation infrastructure could be partially responsible for the presence of local job centers, which could enhance nearby employment opportunities. A disproportionately high number of trips in many disadvantaged areas, however, are made by nonresidents commuting to job centers. Therefore, residents may suffer substantial health costs compared to nonresident commuters, who return every evening to less-polluted areas. Although rather simplistic, this scenario is supported by our finding that minority and poor residents are less likely to have a household vehicle, less likely to commute to work in an auto, and more likely to use public transit. (Heavy-duty gas and diesel transit buses are responsible for only a small portion of overall vehicle-related emissions in California. Also, over eighty percent of the bus fleet of the Los Angeles County Metropolitan Authority, the largest transit provider in Southern California, uses clean-burning compressed natural gas.) 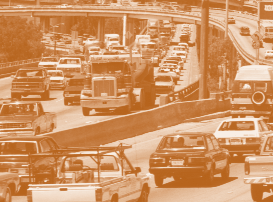 Clearly, equity questions raised by the uneven distribution of traffic within urban regions are complicated. Without a more detailed understanding of individual activity and travel patterns, pollution dispersion patterns, and individual exposure levels, we may not fully understand the benefits and costs of living, working, and recreating in high traffic areas. Still, with growing understanding of the localized effects of vehicle-related pollutants, transportation and land use planners have enough information to formulate and implement strategies to protect the health of all city inhabitants who use these areas, including the most disadvantaged.

Recent and projected expansions of goods movement corridors in Southern California raise many environmental justice concerns, including the potential localized effect of diesel pollution. Heavy-duty diesel trucks emit high levels of ultrafine and fine particles, and a complex mixture of gaseous air pollutants, 41 of which are listed by the State of California as toxic air contaminants. Transportation corridors with heavy-duty diesel traffic such as the 710 freeway in Los Angeles tend to have higher concentrations of these harmful pollutants than a freeway with less diesel traffic such as the 405. The California Department of Transportation says that in 2002 the segment of the 710 from the Ports of Long Beach and Los Angeles through the low-income, minority communities of Lynwood, South Gate, and Bell into East Los Angeles carried over 32,000 trucks per day, comprising up to fifteen percent of all the traffic on this segment. Much of this truck traffic carries goods throughout the entire region. According to the South Coast Air Quality District, diesel particulate emissions are responsible for about seventy percent of the estimated carcinogenic risk from air toxins. Although the expansion of goods movement corridors offers regional and national economic benefits, the cumulative local health effects of diesel exhaust might be huge. Near-roadway exposure to diesel-related pollutants such as ultrafine particles, black carbon, and carbon monoxide could also be compounded by nearby rail and port activities.

Given the pervasiveness and necessity of urban roadways, multiple strategies will be required to address the adverse impacts of vehicle-related pollutants, especially since technological solutions for future gains in emission reduction appear limited in the near future. While gasoline vehicles have become much cleaner, on- and off-road heavy-duty diesel engines are just now being required to meet stricter emissions standards. Until recently, pollution controls on these engines were limited by the high sulfur content of diesel fuel. On-road diesel engine models of 2007 or newer sold in the United States will now be equipped with advanced pollution control technology such as particulate filters and required to use newly available ultra-low sulfur diesel fuel (ULSD). Similar requirements will be phased in over the next decade for new non-road diesel engines such as in construction, agricultural, and industrial equipment. The California Air Resources Board (ARB) suggests these new on-road diesel standards could result in a ninety percent reduction of NOX emissions and a ninety percent reduction in particulate matter emissions compared to 2004 diesel standards.

While gasoline vehicles have become much cleaner, on- and off-road heavy-duty diesel engines are just now being required to meet stricter emissions standards.

Diesel engines are very durable, however, and can last for thirty years, which limits the near-term effectiveness of the new standards. Even though retrofitting older diesels with new emissions controls and using ULSD could help curb emissions, implementing a large-scale retrofit program is extremely challenging. The San Pedro Bay Ports recently proposed incentive programs to promote the replacement and retrofit of older heavy-duty diesels and to make alternate fuels and clean diesel more widely available. Another strategy restricts “sensitive land uses” away from major roadways. In 2003, the California legislature responded to the evidence of high concentrations of harmful pollutants near major roadways by prohibiting the construction of public schools within 500 feet of busy roadways. Ten percent of California public schools and nineteen percent of the state’s licensed childcare centers are located within 500 feet of a major roadway. As many as 25 percent of childcare centers are located within 650 feet of a major roadway. 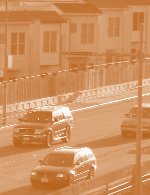 With the recent adoption of new rules by the Environmental Protection Agency and the Federal Highway Administration, regional agencies will soon be required to demonstrate that transportation projects involving significant increases in diesel traffic (such as road expansions and new bus terminals) do not create hazardous hotspots of particulate matter. Initial guidelines for hotspot analysis include qualitative review and comparisons with similar projects in the region to identify potential impacts. This new requirement could be a step in the right direction, but since it is just now being translated into practice and lacks clear guidelines for impact assessment, it remains unclear how effective it will prove.

A large-scale resiting of sensitive land uses away from major roadways is highly unlikely. Therefore, multiple strategies should be explored to reduce exposures and protect public health. Further research is needed to better understand how vehicle-related pollutants disperse immediately adjacent to major roadways, and to study the extent to which barriers such as sound walls or landscape buffers can mediate the concentration of pollutants. Potential solutions may include the installation of air filtration systems in near-roadway facilities and residences to limit the intrusion of outdoor air. Strategic site design could help reduce the exposure of vulnerable populations to vehicle pollutants. For instance, playgrounds and outdoor activities at schools could be located on the side of the property farthest from major roadways. Outdoor and vigorous activities could be restricted during high traffic periods. 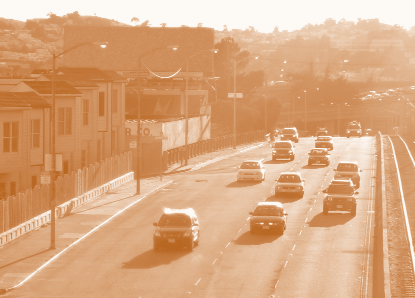 We’re only beginning to understand the public health, policy, and societal implications of on- and near-roadway exposures to vehicle-related pollutants. Transportation and land use planners accustomed to addressing regional effects of vehicle-related pollutants through the air quality conformity process must also continue to devise new strategies or reorient existing ones to account for local health effects. For instance, smart growth plans to reduce vehicle-miles traveled through mixed-use development could reduce both near-roadway exposures and regional smog. Such development, however, should be evaluated carefully to avoid high local air pollution concentrations from multiple commercial, industrial, or transportation infrastructure. The integration of local-level concerns into regional transportation, air quality, land use, and growth planning is a daunting but worthwhile pursuit. We must localize the scale of our thinking even as we work towards regional prosperity and health.

Douglas Houston is an Assistant Professor of Planning, Policy & Design at the University of California, Irvine.

Jun Wu is Associate Professor of Public Health at the University of California, Irvine (jun.wu@uci.edu).