One-way streets in downtown areas are receiving a critical look. City officials and urban planners have started a movement to convert downtown street networks from their traditional one-way operation to two-way operation. This effort seems to be largely successful—many cities (e.g., Denver, CO; Dallas and Lubbock, TX; Tampa, FL; Des Moines, IA; Salina, KS; Kansas City, MO; Sacramento, CA) have either recently made or are in the process of making such conversions. These conversions are intended to improve vehicular access and reduce driver confusion. Many additional factors go into this decision, but the general premise is clear: travelers and residents prefer two-way streets for a variety of economic and livability reasons, while traffic engineers and transportation planners believe that one-way streets serve traffic more efficiently.

Our study uses an idealized traffic network model to directly compare the efficiency of one-way and two-way street networks. It finds that two-way streets may serve traffic more efficiently, especially when trips within the network are short.

A one-way network may prevent drivers from approaching their destination from the most logical direction. This uncertainty can intimidate drivers and, in some cases, make them hesitant to return.

Downtown visitors, whether they arrive by car or public transportation, prefer two-way street networks to one-way street networks because they are less confusing. Visitors driving in a two-way grid network can easily approach their destination from any direction. A one-way network may prevent drivers from approaching their destination from the most logical direction. This uncertainty can intimidate drivers and, in some cases, make them hesitant to return. Likewise, two-way streets make locating the transit stop for a return trip from downtown easier—in almost all cases, the bus stop is simply located across the street. On one-way networks, however, the stop for the return trip is usually on another street, which may confuse visitors and cause them to get lost.

Additionally, two-way street networks allow drivers to take the most direct routes from origin to destination. Consider, for example, the trip shown in Figure 1a between origin O and destination D. In a two-way network (shown by the arrows that denote travel direction), the driver can take the most direct path from O to D. Compare this route to the same trip on a one-way network, as shown in Figures 1b and 1c. The driver may have to travel some additional distance at either the origin (as in Figure 1b), destination (as in Figure 1c), or both. Thus, the use of one-way street networks increases the average driving distance between any paired origin-destination points and will result in more vehicle miles traveled (VMT). Increased VMT means increased fuel consumption, emissions, and exposure to accidents. 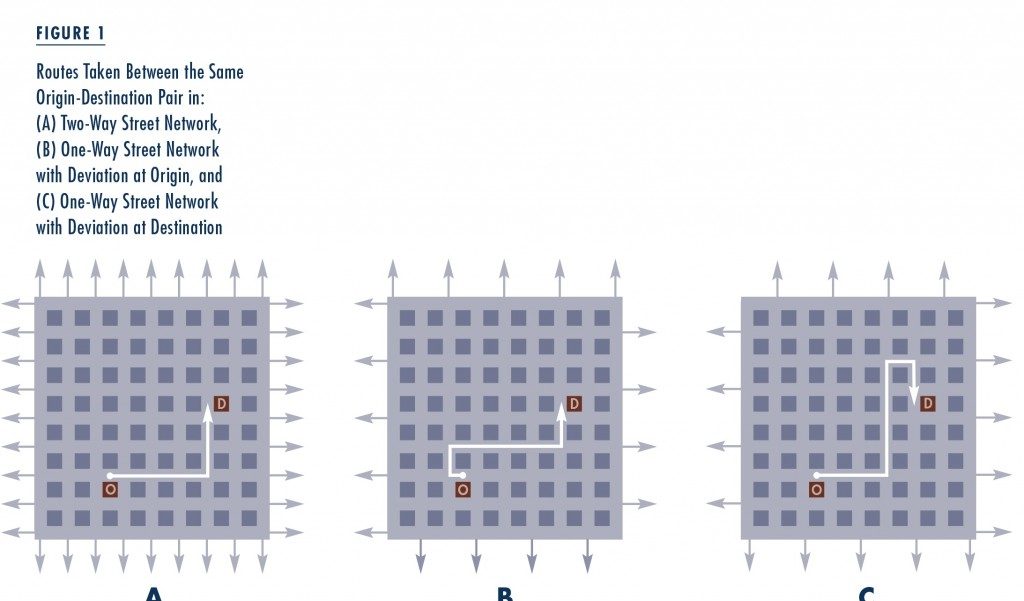 Opponents of converting one-way streets to two-way operation often cite this decrease in vehicle-moving capacity (in addition to cost and feasibility). Although two-way streets can increase prosperity and livability, decision makers fear that the loss in vehicle throughput will result in longer and more congested peak periods, lower average vehicle speeds, and increased vehicular delay. Thus, reduced vehicle capacities lower network efficiency. Worse yet, congestion arising from the loss in vehicle-moving capacity can cause people to avoid downtown and may contribute to its decline as a center of economic and recreational activity. 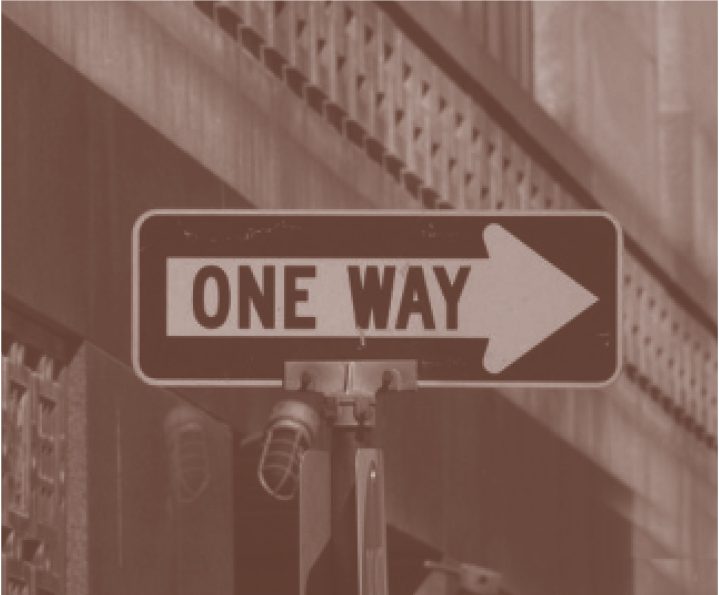 The ability to move many vehicles does not reflect the ultimate objective of any transportation network. The goal is to allow people to reach their destinations as quickly as possible. The maximum rate at which people reach their destinations, also known as the network’s trip-serving capacity, more accurately captures this objective. All else equal, a network with a higher trip-serving capacity will serve vehicle trips with less delay.

Therefore, even though current research and conventional wisdom suggest that one-way street networks are more efficient than their two-way counterparts, we show that one-way networks are sometimes less efficient because they restrict the rate at which people reach their destinations. When this is the case, there is a greater incentive to convert traditional one-way street networks to two-way operation.

We can directly compare the trip-serving capacities of various two-way and one-way networks. The two-way street networks differ in their treatment of conflicting left turns at intersections. Here, we consider three treatments for a network with two travel lanes in each direction. Figure 2 shows the intersection configurations for these networks. Table 1 summarizes the advantages and disadvantages of these three treatments.

The trip-serving capacities of these networks vary based on factors such as demand distribution, signal timing at the intersections, and driver routing schemes. To simplify the analysis, we compare the networks under ideal conditions, which include uniform travel patterns, dedicated left-turn signals that are timed to serve the existing left-turn demand, and the most direct driver routing. These ideal conditions facilitate an analytical solution to the trip-serving capacities of the different networks, but the results of this analysis also apply to real-world conditions where these assumptions are relaxed. 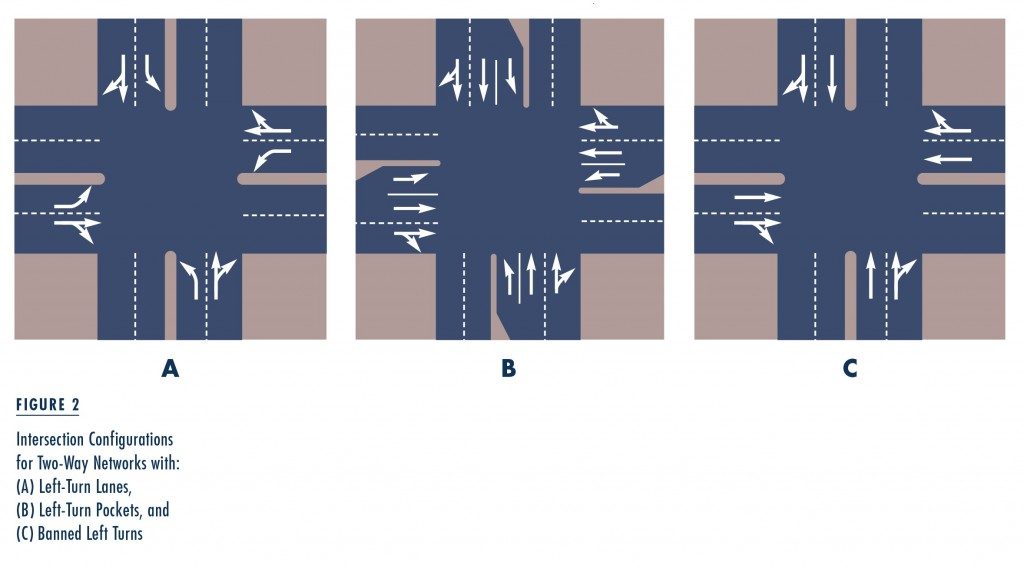 A network’s trip-serving capacity turns out to be a ratio of two quantities: its vehicle-moving capacity and the average trip length. The number of vehicles that can move through an intersection during a signal cycle determines the vehicle-moving capacity. Applying probability theory to the network geometry can help us determine the average trip length by determining how much farther vehicles must travel given the movement restrictions. Both quantities, and thus the trip-serving capacity of the network, turn out to be a function of two key parameters: 1) the average distance between origins and destinations in the network; and, 2) the amount of time wasted at left-turn signals. Figure 3 shows the ratio of the trip-serving capacities for the two-way street networks compared to the one-way street network for different values of these variables. This ratio measures the relative efficiency of a two-way network compared to a one-way network. Values greater than one imply that the two-way network serves trips at a higher rate, while values less than one imply that the one-way network is superior. 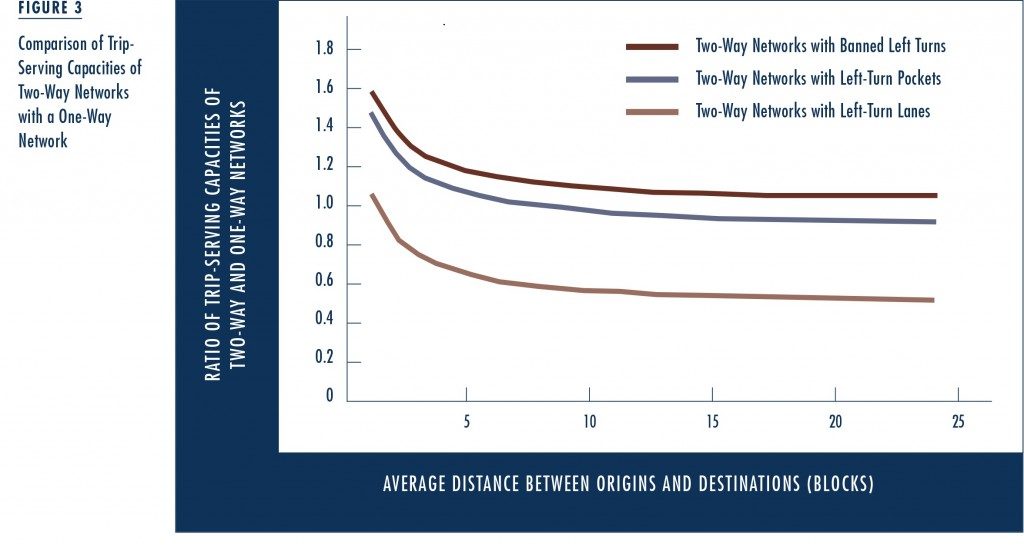 In Figure 3 the two-way networks that allow left turns have higher trip-serving capacities for shorter trip lengths. When trip lengths are short, the additional circuity of one-way networks is so damaging that simpler signal timing at the intersection (and higher vehicle-moving capacities) cannot compensate for the additional travel distance. When trips are longer, however, simpler signal timing does compensate for the additional travel required by the one-way network. Since average trip length should be proportional to the size of the downtown area, a one-way to two-way conversion of a downtown network may actually increase the network’s ability to serve trips in smaller cities. Figure 3 also shows that even if trips are long, the two-way networks with left-turn pockets can provide trip-serving capacities that are just 10 percent lower than one-way networks. The critical trip length that separates “short” and “long” trips is a function of the amount of time wasted at dedicated left-turn signals. As more time is wasted at dedicated left-turn signals, this critical trip length decreases.

The critical trip length that separates “short” and “long” trips is a function of the amount of time wasted at dedicated left-turn signals.

Regardless of the size of the city, however, a one-way to two-way street conversion should always increase the efficiency of downtown networks. 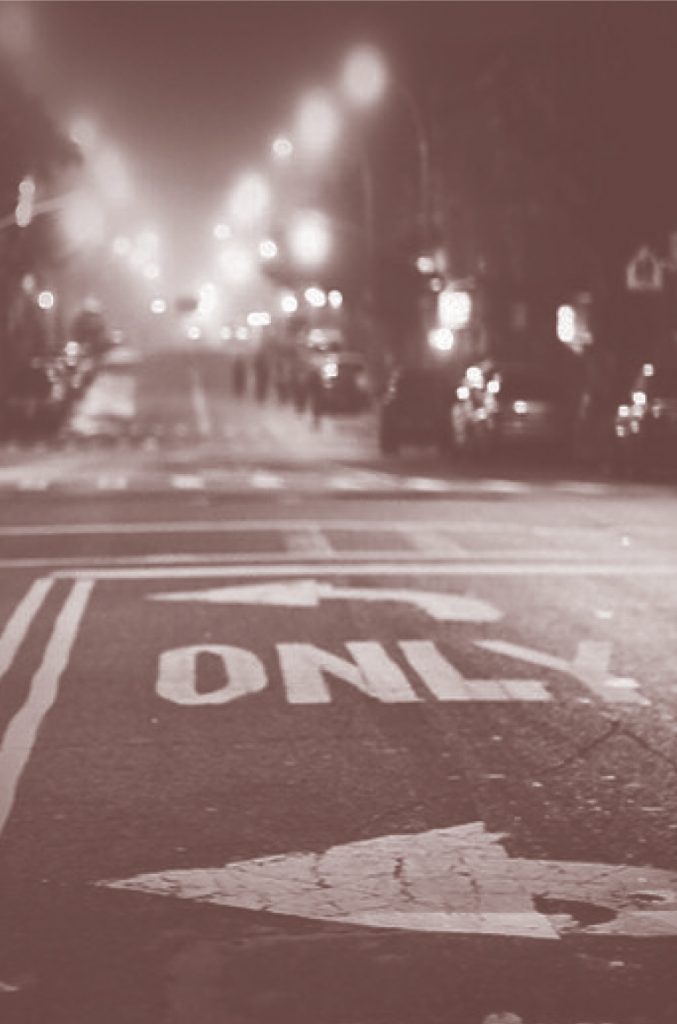 When they consider converting to two-way streets, urban planners and traffic engineers should examine the average trip length within the network. Intuition suggests that average trip lengths tend to be proportional to the size of the downtown—larger downtowns should have longer trip lengths. Smaller downtowns should thus carefully examine the time wasted when providing dedicated left-turn signals to determine what type of two-way network configuration to use. Since the wasted time decreases with average cycle lengths, smaller cities should accommodate left turns only when cycle lengths are long, and should ban left turns when cycle lengths are short. Larger downtowns, however, should also convert to two-way operation but ban left turns at intersections. Regardless of the size of the city, however, a one-way to two-way street conversion should always increase the efficiency of downtown networks. Since residents prefer two-way street networks for a variety of reasons, converting a one-way street network to two-way operation can improve both the efficiency and livability of cities.