The tremendous expense required for new urban road capacity has led policy analysts and decision makers to despair of “building our way out of traffic congestion.” But there is another route involving highway design that is relatively unexplored: designing more compact roads.

Consider first our network of urban expressways. It is especially expensive to build or expand high-speed expressways conforming to the stringent design standards of the federal Interstate Highway System. These standards specify lane and shoulder widths, sight distance, grade, and other characteristics that require a lot of land and extensive infrastructure such as ramps and bridges. Such roads and the high speeds they accommodate create considerable visual blight, water runoff, neighborhood isolation, and noise. Policymakers nevertheless often favor expressways built to Interstate standards because they theoretically provide safe travel at very high speeds. Yet during congested hours, cars travel at low speeds on these expressways; only off-peak drivers travel at high speeds on these extraordinary engineering investments.

But suppose we can design new roads, or reconfigure existing roads, to have lower speeds, neighborhood-friendly footprints, and higher capacity. In some circumstances, doing so can make road-building a more feasible and affordable policy, provide a more pleasant driving experience, and soften the environmental and urban impacts.

Older urban parkways, such as the Baltimore-Washington Parkway, the Arroyo Seco Parkway in Los Angeles, and an extensive parkway system on Long Island, feature architecturally interesting structures, attractive landscaping, and designs that fit into the surrounding landscape. They also provide ample capacity and are much cheaper than modern Interstates. Such designs are still possible. An advisory council for the Illinois Parkway has proposed a new toll parkway in Lake County (north of Chicago) with a design incorporating hills, curves, landscaping, and a 45 mph speed limit. The Council’s stated rationales are less noise, fewer emissions, a smaller footprint, and wetlands preservation, all considered “advantages associated with a lower operating speed.”

Besides being more pleasant for drivers and neighbors, a road can actually accommodate more capacity within a given right of way if the design has more but narrower lanes and reduced shoulder widths. This means off-peak travelers must drive more slowly but peak travelers can drive faster.

As an example, the standard 12-foot-wide lanes of US Interstate highways provide safety margins for mixed traffic at high speeds. But a road of the same total width can provide more lanes if the lanes and shoulders are narrower. Furthermore, lower free-flow speeds allow for sharper curves and steeper grades that better integrate into the built environment. Historical examples include not only the parkway designs just noted, but also more recent capacity expansions in which lanes were restriped to an 11-foot width, while shoulders or medians were converted to travel lanes—as was done on Interstate 405 near Los Angeles Airport in 1995.

To examine these tradeoffs in more detail, we compare two roadway designs: first, an expressway of Interstate standards with the lane and shoulder widths recommended by the American Association of State Highway and Transportation Officials; second, a more compact design with narrower lanes and shoulders. For ease of comparison, we assume that both expressways have the same total width, and would thus have similar construction and maintenance costs.

Our specification, shown in Figure 1, allows three lanes in the compact expressway compared to two in the regular expressway. The speeds and capacities of these expressways, shown in Table 1, are based on the Transportation Research Board’s widely used 2000 Highway Capacity Manual. 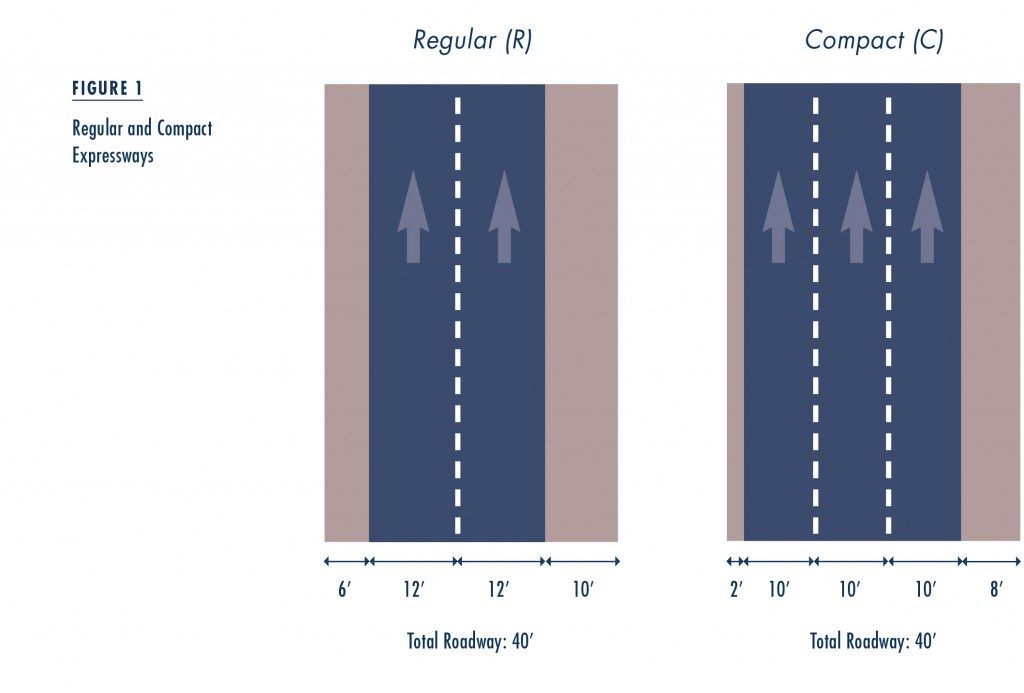 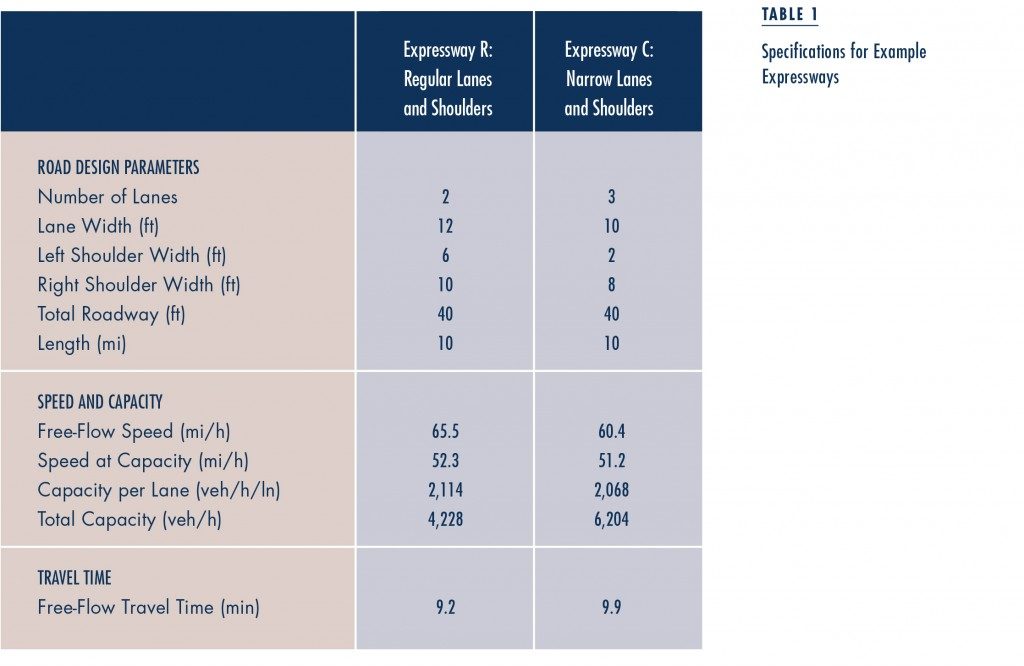 With its wider lanes and shoulders, the regular Expressway R has a higher free-flow speed (65.5 mph) than the more compact Expressway C (60.4 mph). Thus, under light traffic conditions, it would take nearly 10 minutes to travel 10 miles on Expressway C but only 9.2 minutes on Expressway R. As traffic volume increases, however, travel speed falls on both roads due to queuing at bottlenecks. The decline in speed occurs sooner and more sharply on Expressway R with its fewer lanes.

We can compare average travel times on these roads under various traffic conditions. To illustrate, here we assume that the peak period occurs for four continuous hours per day, six days per week. If traffic volume exceeds capacity, a queue forms at the entrance of the road, resulting in delays. At the end of the peak period, the queue gradually dissipates. 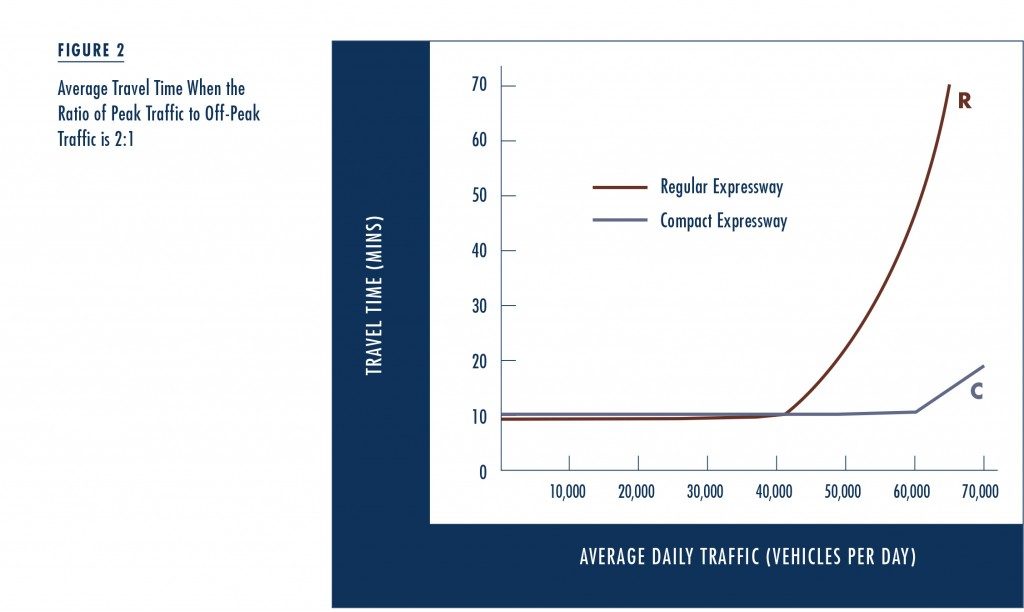 Repeating these calculations at different traffic levels and peak-to-off-peak ratios, we find the compact design performs better under all conditions in which there is appreciable queuing. Most strikingly, the compact design increases time savings very rapidly as traffic increases, reaching 50 minutes savings when the ADT reaches 65,000 vehicles per day. By contrast, the regular design for light traffic volumes saves very little time—at most, 0.8 minutes. The reason is simple: the advantage of the compact design depends on the significantly delayed onset of queuing, whereas that of the regular design depends on the small difference in free-flow speeds.

Of course, this example does not depict the full range of relevant alternatives. We have elsewhere compared two roads of different widths but similar capacities: an expensive full-fledged expressway and a cheaper but reasonably fast urban arterial. For example, Lake Shore Drive in Chicago has entrance and exit ramps and bridges for cross traffic but also a few at-grade intersections with traffic signals. Such urban arterials are much less costly to build than grade-separated expressways, and this cost saving can be measured against longer travel times. This comparison will again depend strongly on the peak-to-off-peak ratio, because during congested peak periods the speeds are virtually identical on the two roads, whereas the more expensive road will provide some off-peak time savings.

These comparisons do not consider induced demand, the well-documented phenomenon that lowering congestion on a particular road, or sometimes even in an entire area, attracts more traffic—which in turn undermines the congestion relief. Suppose we replace a regular facility with a compact one of greater capacity, thereby lowering the amount of congestion. Newly attracted drivers will indeed undermine some of the travel-time savings. Nevertheless, the facility is now serving travelers who previously were deterred by congestion, so they are getting some benefits even if others are getting fewer benefits than shown in our simpler calculations. If some of the newly attracted traffic was previously using other highly congested roads, people on those roads also benefit. 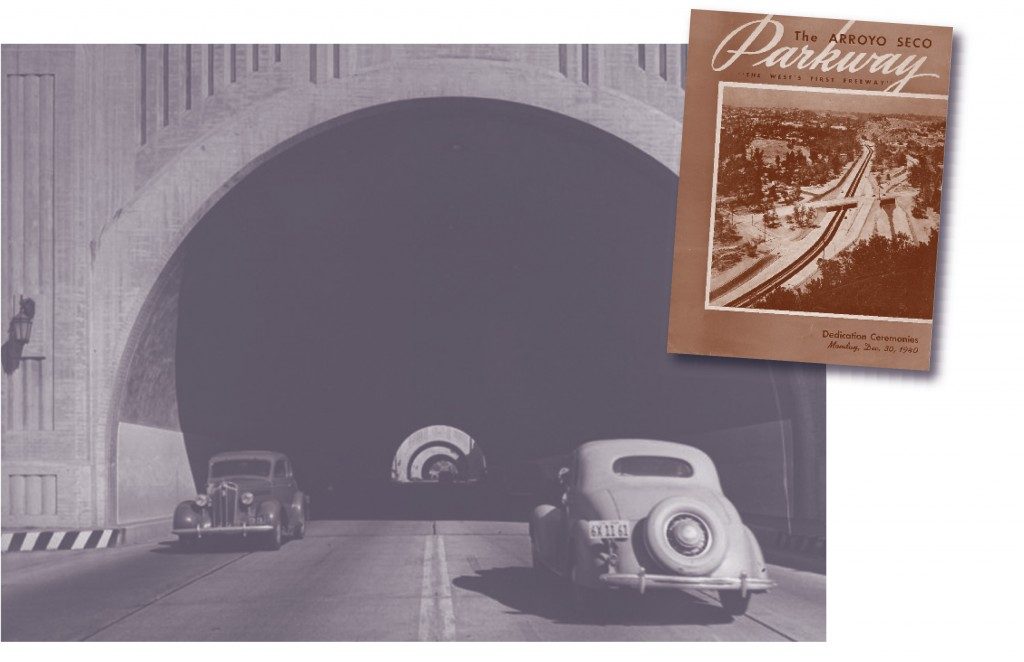 Roads with wider lanes and shoulders are usually considered safer, for several reasons. They provide some leeway if drivers wander, maneuver to avoid an accident, or make an emergency stop. They also offer longer sight distances and give drivers confidence that nothing will inadvertently enter their lane.

Drivers may compensate for an apparently safer environment by paying less attention, speeding, driving close to the vehicle ahead, or making unnecessary stops on the shoulder.

Yet a sizeable empirical literature presents mixed evidence on whether wider roads are actually safer. One reason for the disparate findings may be that most studies compare a wider design with a narrower one with the same speed limit. Instead, our proposal would have lower speed limits on the compact roads. Furthermore, drivers may compensate for an apparently safer environment by paying less attention, speeding, driving close to the vehicle ahead, or making unnecessary stops on the shoulder. These are examples of the well-known Peltzman effect: safety improvements are at least partially offset by more aggressive driving.

Thus, it is uncertain whether the compact road design will reduce or increase safety. The most important factor is likely the speed chosen by drivers, which suggests a policy response: reduce the speed limits on compact roads and add other measures to discourage speeding. Evidence shows that drivers are more likely to accept such measures if the road design makes the need for them intuitively clear. Drivers in some European countries, for example, have accepted in-vehicle speed controls.

We believe that newer technology designed to prevent accidents, such as automatic braking to maintain vehicle spacing and automatic steering to prevent lane wandering, may have a greater positive effect on both safety and capacity when the roadway is more compact. The closer vehicle spacing required or encouraged by compact road designs is just what these technologies are intended to cope with. Furthermore, the technologies can work more successfully if they do not have to counteract aggressive driver behavior.

Conclusion: Slower Can Be Faster (and Nicer) 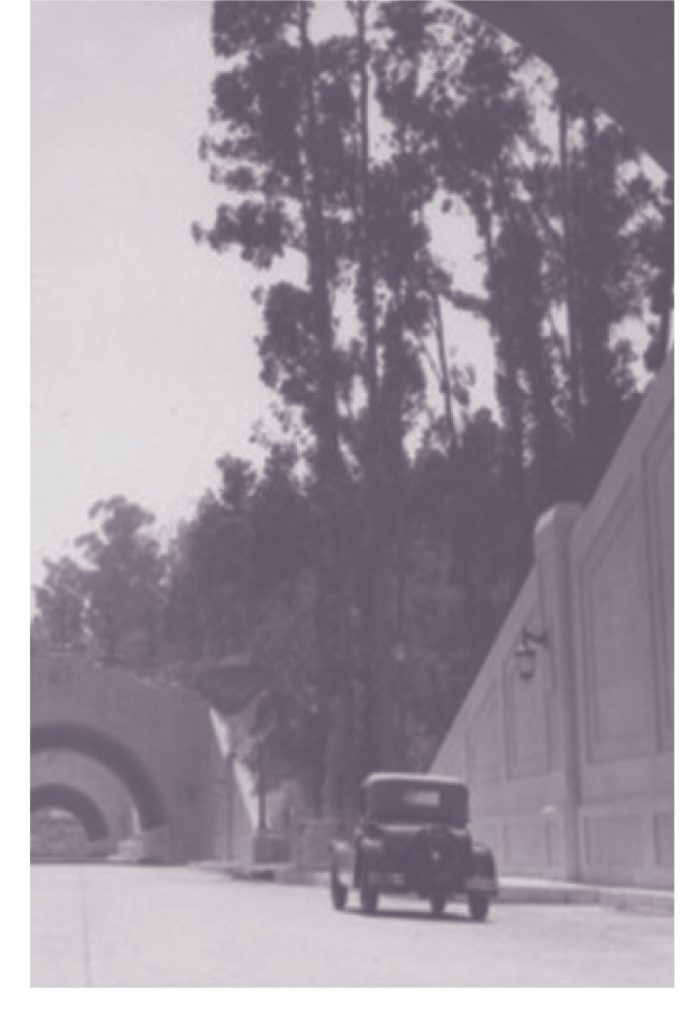 The choice of lane width leads to a tradeoff between free-flow speed and capacity, but the tradeoff is not symmetric. We find that squeezing more lanes into a given road width produces large time savings during congested peak periods. By contrast, wider lanes and shoulders offer only slightly higher off-peak speeds. Thus, the compact design with higher capacity often results in shorter total travel times. Furthermore, people find congested travel especially onerous, making it even more likely that a system of urban roads carrying people at modest speeds will make travel more pleasant.

We find that squeezing more lanes into a given road width produces large time savings during congested peak periods.

Compact roads also have considerable environmental advantages. They integrate better into urban landscapes because they accommodate tighter curves and steeper grades. They require smaller structures and less earth moving. Neighborhoods suffer less disruption, an advantage accentuated by the lower free-flow speeds. Therefore, urban residents are likely to benefit from the smaller environmental footprint of these roads as well as from their superior ability to carry high-peak traffic flows.

This article is adapted from the longer version, “Tradeoffs Among Free-flow Speed, Capacity, Cost and Environmental Footprint in Highway Design,” originally published in Transportation.