Does Transit-Oriented Development Need the Transit?

Most planners think #TODs lead to less driving, but what if it’s not because of rail? #Parking

Urban planners have invested a lot of energy in the idea of transit-oriented developments (TODs). Developing dense housing near rail stations with mixed land uses and better walkability is intended to encourage people to walk, bike, and take transit instead of driving. But TODs can also be expensive, largely because rail itself is expensive. In one study, the average cost for light rail construction was $61 million per mile in 2009 dollars.

If rail access does reduce driving and the environmental problems caused by driving, then expensive rail investments may well be worthwhile. But the actual impact that TODs have on driving remains open to debate. Many studies have shown that households living near rail stations are more likely to use transit than other households. But using transit more is not the same as driving less. And even if people in TODs do drive less than people elsewhere, we cannot be sure that transit was responsible. Easy access to a rail station might encourage people to walk rather than drive—but so too might wider sidewalks, narrower streets, and closer destinations. Denser places also tend to have worse traffic and fewer places to park. In other words, TODs might discourage driving not by making rail travel easy, but by making driving less attractive. If this is the case, TODs may not need their “T” at all. The key to less driving in TODs may not be the presence of rail, but other factors like higher density, greater walkability, and less parking.

TODs may not need their “T” at all. The key to less driving in TODs may not be the presence of rail, but other factors like higher density, greater walkability, and less parking.

There are few studies of whether people living in TODs own fewer cars and drive less than people living outside TODs. More than half of those studies found that rail access is associated with lower auto use. But usually the studies did not account for other important TOD characteristics, particularly parking availability. Extending on this prior research, how can we isolate rail transit’s influence on travel behavior and separate it from the influence of other attributes of TODs? To help answer this question, I conducted a mail survey of households within a two-mile radius of ten rail stations in New Jersey (Figure 1). Some of the households lived in purpose-built TODs and some didn’t, some lived in newer housing and some in older housing, and some were near rail while others were farther away. The selected stations provide excellent transit access to Manhattan through a mix of light rail, heavy rail, and high-frequency commuter rail service. My survey collected information on housing characteristics, on- and off-street parking, work and non-work travel, household characteristics, and residential location preferences. In addition to the household survey, I included existing neighborhood attribute data, as well as on-street parking data collected by on-foot observers.

Household Differences by Distance to Rail

About 1,100 people responded to the survey; half lived within walking distance of rail stations (defined as a walk of 0.4 miles or less), and about 30 percent lived in new housing (defined as housing that was less than seven years old). Respondents living in new housing within walking distance of rail stations reported lower auto ownership, less auto commuting, and fewer weekly vehicle grocery trips than those living in new or older housing farther away.

To investigate these potential alternative explanations, I first estimated how auto ownership related to the household’s distance to rail and the age of the house. When I looked at the simple relationship between rail access and auto ownership, ignoring other factors, each additional mile farther away from rail increased auto ownership by an average of a tenth of a car per mile. Living in a new house near a rail station was associated with 27 percent lower auto ownership per person compared to new housing away from rail. 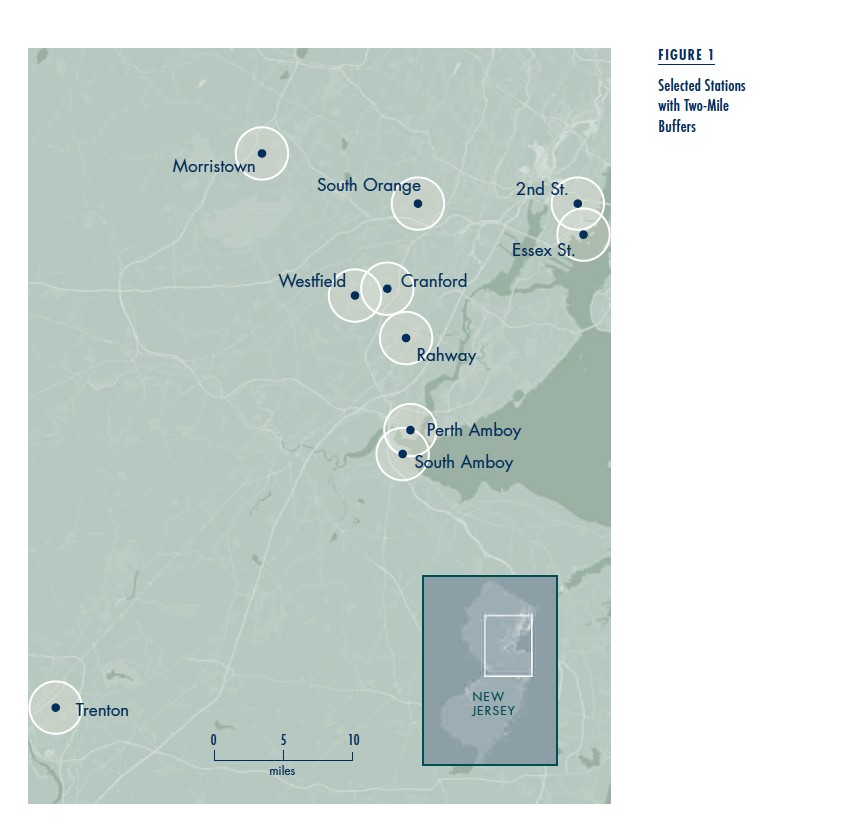 What about Driving to Work?

How about Grocery Visits?

Buying groceries is one of the most common trip purposes. Thus I also estimated how rail access and other TOD characteristics affected the frequency of car trips to buy groceries. Again, when controlling for parking supply, housing, and built environment characteristics, neither housing age nor walking distance to rail showed any association with the frequency of auto grocery trips. What was important? The number of grocery stores nearby, the job density and bus stop density near the home, the home’s distance to downtown, and the parking. Each additional grocery store within a quarter mile of the home reduced the number of auto trips for groceries by about 5 percent. Households with both scarce on- and off-street parking took substantially fewer auto-based grocery trips, a reduction of about 25 percent. Note that neither on-street nor off-street parking was independently significant. This makes sense, because carrying groceries is inconvenient on foot or via transit, so only significant impediments to auto ownership and use are likely to make a difference.

Developing high-density, mixed-use housing near rail stations may reduce traffic congestion and auto pollution, slowing the growth of greenhouse gas emissions caused by cars. But there is a huge caveat: those benefits may not depend much on rail access. In this study, lower auto ownership and use in TODs was not from the T (transit)—or at least, not from the R (rail). What does reduce car ownership and use? Lower parking availability, better bus service, smaller housing units, more rental housing, more destinations within walking distance, better proximity to downtown, and higher population and employment density all reduce car ownership and use. When controlling for these other factors, rail was not significant except in one limited but important case: when combined with low parking, rail did reduce automobile ownership but even then it did not reduce automobile trips for commuting or grocery trips.

Though rail service undoubtedly attracts auto users in a way that buses do not, in some contexts it may also siphon off bus riders, walkers, and bikers. To test this hypothesis in the case of the commute to work, I estimated additional commute mode regressions. Controlling for other factors, rail station distance was positively correlated with rail commuting, but negatively correlated with other forms of commuting (such as by bus, walking, biking, or taking the ferry). Rail station distance was also negatively correlated with working at home. In other words, rail does not seem to draw its users from the ranks of auto commuters. This helps explain why rail access doesn’t seem to affect auto use and why it affects auto ownership only in combination with other factors like scarce parking.

What does this mean for policy? Developers are aware that public opposition is often lower near rail stations, and policy makers and urban planners believe that rail access will mitigate traffic impacts. But such a policy will not improve long-term sustainability when rail investments and rail-proximate housing, in and of themselves, make little difference in auto ownership and use.

Current sustainability policies are often focused on investing in rail and developing housing near rail stations. Take California Senate Bill 375, a widely observed and admired attempt to incorporate climate planning in regional transportation and land use planning. SB 375 gives special consideration to “transit priority projects,” which are dense housing developments located within a half-mile of a major transit station or high-quality transit corridor. But focusing primarily on TODs to reduce greenhouse gases could be a great mistake. A better strategy would be to provide incentives for building smaller rental units with less on- and off-street parking in locations with better bus service and higher employment density. At the very least, TODs should be developed with less parking. If they are not, they will not reduce auto use.

If access to rail is not a primary factor in reducing auto use, it could be a blessing, not only because rail infrastructure is expensive, but also because the amount of available land near rail stations is limited. That said, allowing higher housing density and scarce on- and off-street parking everywhere could increase congestion if not carefully managed. Negative local impacts cause cities to frown on dense developments and neighbors to protest them. How can urban planners bring about a more widespread relaxation of parking regulations, height limits, floor-area ratios, and the general plans that restrict the form and location of development and redevelopment? This planning puzzle deserves our focused attention. The pursuit of rail-oriented development may be a distraction from it.

This article is adapted from “Does TOD Need the T? On the Importance of Factors Other Than Rail Access,” originally published in the Journal of the American Planning Association.

Daniel Chatman is Associate Professor in the Department of City and Regional Planning at the University of California, Berkeley (dgc@berkeley.edu).