#TODs require a lot of energy and expense up front. Is it worth it in the long-run?

There is a growing interest in pedestrian and transit-oriented development as a way to reduce the cost of transportation and home energy use. Yet there is little knowledge of how much alternative travel modes and compact developments reduce environmental impacts and household costs. As US cities begin to rethink their growth, city planners need better tools to measure the environmental and economic effects of infrastructure redesign.

We have developed a life-cycle assessment framework that helps planners understand how energy use, air pollution, and household costs change when integrating transportation and land use planning around high-capacity transit. Using this framework, we can evaluate emissions from the construction and rehabilitation of buildings around transit, changes in household energy use within these neighborhoods, and reductions in automobile use as households shift some of their travel to alternate modes. We compare transit-oriented households to households that do not have access to high-capacity transit. Using Los Angeles’s Gold Line (light rail) and Orange Line (bus rapid transit) as case studies, we assess how these variables changed with development around those lines.

The Los Angeles County Metropolitan Transportation Authority (LA Metro) operates one of the largest urban bus systems in the United States, in addition to a growing number of high-capacity bus and rail lines. The LA Metro system of high-capacity transit (HCT) comprises six rail lines and two bus-rapid-transit lines that run on dedicated routes, have short wait times, and carry large numbers of passengers. In addition, LA Metro plans to spend $14 billion to expand HCT lines. The growth of physical infrastructure has been accompanied by impressive ridership increases on all HCT lines, as many residents—particularly those living near transit stations—have chosen to change their travel habits and adopt transit.

We developed a case study of the environmental and economic effects attributable to future redevelopment around LA Metro’s Gold and Orange transit lines. We focused on these two transit systems because they are old enough to have established ridership, yet young enough that land use around the lines has not changed drastically. The Gold Line opened in 2003 and was extended twice to now include 21 stations and almost 20 miles of rail from East Los Angeles through downtown to Pasadena. The Orange Line began operation in 2005 and follows an old railroad right-of-way in the San Fernando Valley. Metro expanded the Orange Line in 2012 to include a total of 18 stations and over 18 miles of dedicated busway (Figure 1). In many places, the busway runs parallel to a greenbelt with a bike and pedestrian path. We found potential for higher density redevelopment around both lines and explored how the land could be repurposed. We then estimated the potential changes to energy consumption, air emissions, and household costs. 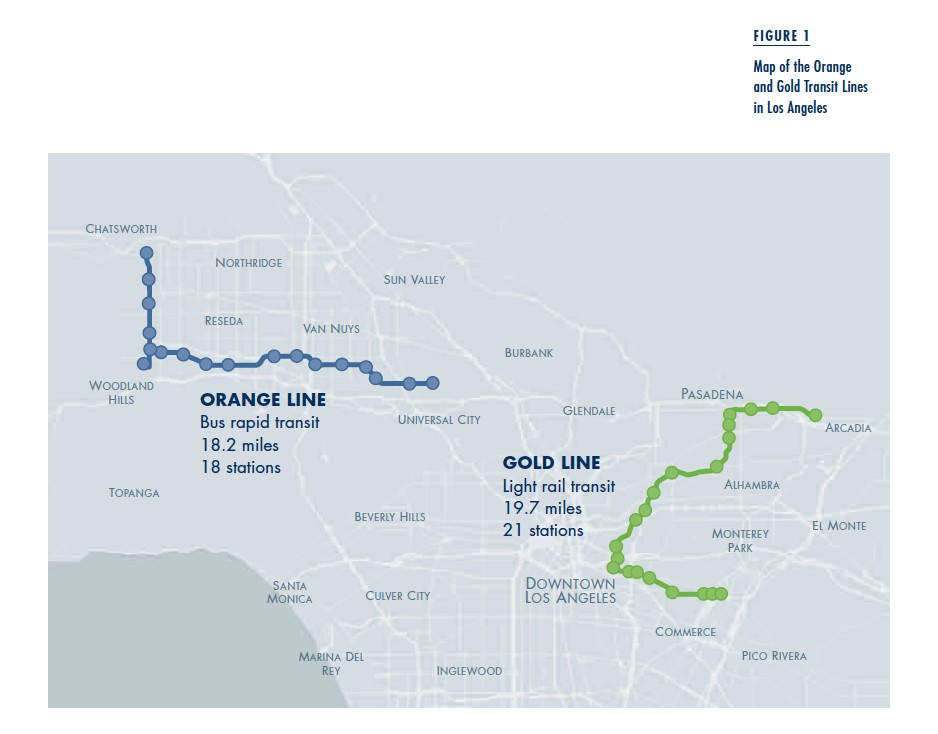 Many people are beginning to demand cities that support convenient and cost-effective multi-modal transportation. Creating mixed-use residential and commercial space that encompasses a supportive mix of office space, entertainment, retail, and public areas, all within walking distance of a transit station, can attract residents who are willing to pay for the convenience of nearby amenities. In the long-term, these mixed-use spaces have the potential to reduce greenhouse gas emissions and household costs by reducing vehicle travel and increasing the energy efficiency of buildings.

We identified five square miles of land that could be used for smart growth development within one half-mile of Gold and Orange Line stations. We focused primarily on vacant parcels of land and dedicated surface parking lots, which are the most underused space around high-capacity transit. Second, we considered parcels of land with existing structures, but that were also underused. We assigned these parcels to one of two reuse plans: 1) demolish existing small structures on large parcels and construct larger buildings; or 2) adapt existing large buildings for reuse. A land parcel was considered to be underused if the value of the land was greater than the value of the existing structures on the land, a common occurrence when an old building exists on a piece of land where the value has recently increased. Adaptive reuse of existing buildings means that the building shell is kept while the inside is remodeled. Both HCT lines in our study offered a mix of residential and commercially zoned parcels that could be redeveloped.

To estimate how energy consumption, air emissions, and household costs would change due to constructing smart growth around the Gold and Orange Line Stations, we first examined the available land and buildings for each parcel. Next, we estimated the environmental and economic impacts from redevelopment. Finally, we created a household and transportation behavioral assessment that integrates the entire life cycle of the system. Emissions assessments often focus on the use of vehicles and buildings while overlooking the production of these vehicles and buildings. Environmental assessments should instead include the life cycles for every part of the transportation system and the buildings, and should include the consequences of changing the area’s physical composition. By expanding the boundary of our analysis, we created an integrated life-cycle assessment of transportation and land use that can estimate all sources of emissions and all costs of redevelopment.

Our model estimated changes in energy consumption, air emissions, and costs from constructing walkable, mixed-use developments. Life-cycle estimations for each building included materials, construction activities, energy production, and energy consumption within the building. For some developments, remodeling older buildings would generate fewer emissions than constructing an entirely new building because parts of the old building would be reused. According to the National Household Travel Survey, residents living near high-capacity transit use automobiles less but walk, bike, and ride public transit more. We also found that households living around transit stations may take the same number of trips compared to others, but these trips tend to be shorter because destinations are closer. Additionally, residents are likely to purchase fewer automobiles over time because they drive fewer miles than people living an auto-dependent lifestyle. Based on these travel characteristics, residents who live near HCT lines reduce their transportation energy consumption and household costs.

Smart growth redevelopment around transit stations requires initial monetary and greenhouse gas (GHG) expenditures, but has the ability to reduce life-cycle costs and emissions when compared to business-as-usual developments. Smart growth around the Gold Line would cost an additional $260 million for redevelopment and create an additional 100,000 metric tons of GHG emissions during construction (Figure 2). However, over a 60-year period, each household could avoid emitting as many as six metric tons of GHG each year, which would more than offset the initial construction emissions. When considering all households combined, the proposed mixed-use developments around the Gold and Orange lines could reduce GHG emissions by over 35 percent compared with business-as-usual developments. Similar reductions are also found for energy consumption, particulate matter emissions, and the potential for smog formation. On average, high-density TOD requires less land per person and leads individuals to reduce their transportation-based emissions by as much as 70 percent through changed travel habits. The upfront cost to construct a transit line and the cost of higher density development around stations are offset by emission reductions over time from residents who are able to change their behaviors and break away from car-dependent habits. 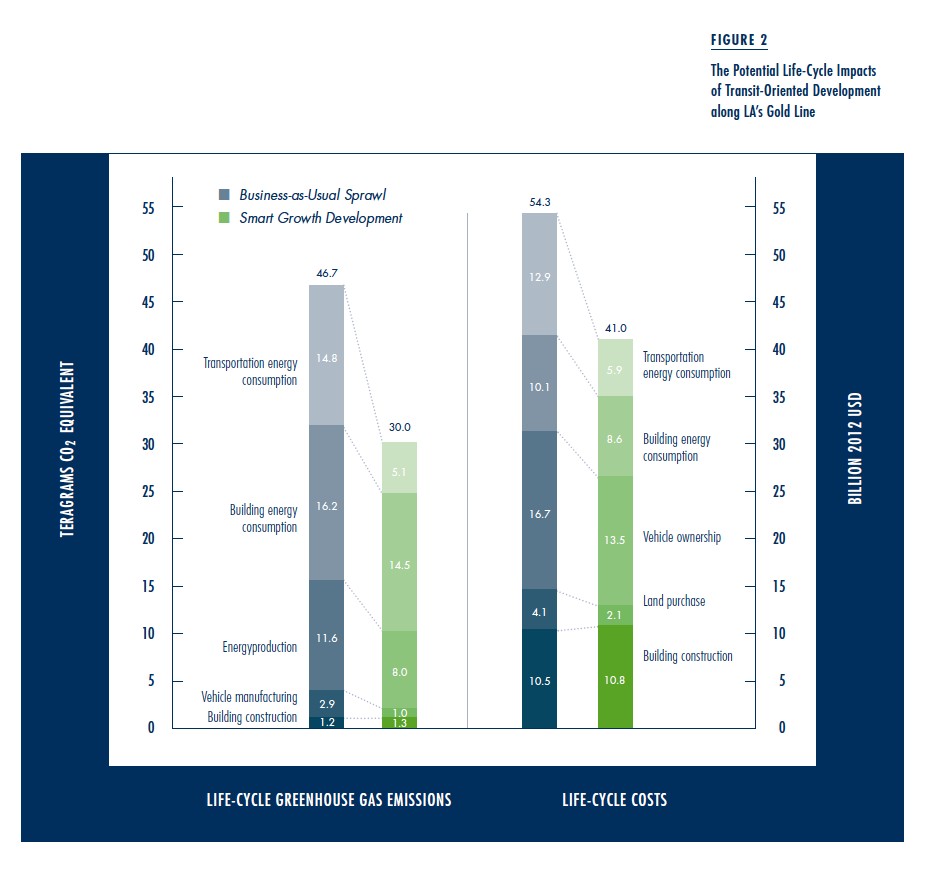 Over a 60-year timeframe, people using more energy-efficient transportation modes and less energy at home will generate fewer emissions than people living an auto-dependent lifestyle. But this wouldn’t be possible without the upfront monetary investment to construct HCT and mixed-use developments, and the initial increase in GHG emissions from their construction. The process of constructing higher density buildings around transit requires more concrete, steel, and the operation of construction equipment, which produces more GHG emissions than construction of lower-density, business-as-usual developments. Despite requiring more money to construct higher density buildings, the overall cost for developing land around transit would be cheaper than a similar sprawling development because purchasing less land for higher density development is substantially cheaper than purchasing more land to enable low density building construction. Developers would likely charge higher rents to tenants in TODs because of higher construction costs and prime locations. But residents can actually save money over time by reducing their costs for transportation and energy consumption in buildings. Figure 3 shows the potential benefits of smart growth around the Gold Line compared to an equal amount of business-as-usual development. 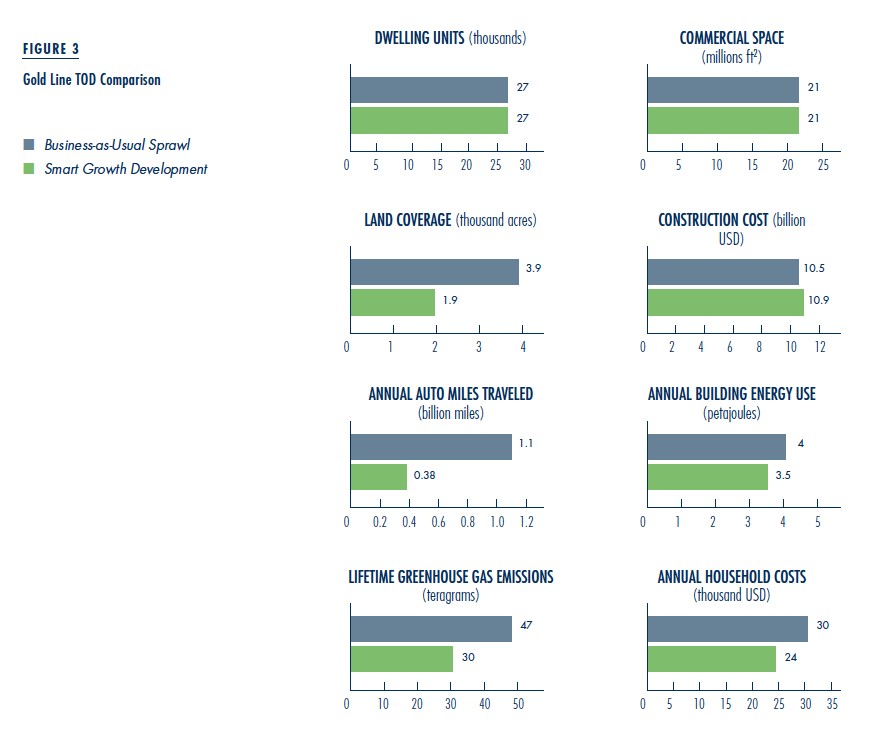 Along two of LA’s eight HCT lines, enough land exists to support 96,000 dwellings and 32 million square feet of commercial space in mixed-use developments. Construction of these buildings for smart growth can produce up to 15 percent more initial GHG emissions than constructing a comparable sprawling development near the urban core. While upfront emission expenditures may not be attractive to policy makers, they enable overall emission reductions from the entire transportation and land use system by up to 35 percent over 60 years. These reductions comprise three primary factors: 1) greater household mobility options that reduce automobile reliance; 2) concentrated pockets of residential and commercial space that reduce trip distances; and 3) households moving into smaller, more energy efficient dwellings that also benefit from reduced electricity use. The life-cycle assessment framework for integrating transportation and land use planning isolates the primary drivers of environmental impacts and monetary costs, and can better inform policy and planning goals.

Planning policies that facilitate smart growth need to be in place at various stages of development to realize the full potential of transit-oriented neighborhoods. Transit-oriented district planning and relaxed parking requirements can encourage developers to create TODs by reducing the time and financial costs involved in complex zoning requirements. Allowing denser development, encouraging mixed-use spaces, and pricing parking appropriately can encourage people who live in smart growth neighborhoods to reduce energy consumption and automobile travel. Together, these policies can reduce the upfront barriers to creating livable, walkable communities around high-capacity transit.

Pairing infrastructure construction with transportation changes shows how the initial higher costs from smart growth are far outweighed by the long-term improvements. Our framework can be used to show policymakers the benefits of smart growth across a wide suite of environmental and economic indicators. The combined assessment of transportation and land use provides a link between land development and behavioral changes that can be used to advise policymakers and planners throughout the development process.

Matthew J. Nahlik is a Graduate Student in the Department of Civil, Environmental, and Sustainable Engineering at Arizona State University (mjnahlik@asu.edu).

Mikhail V. Chester is Assistant Professor in the Department of Civil, Environmental, and Sustainable Engineering at Arizona State University (mchester@asu.edu).