Are Americans Really Driving So Much More?

Vehicle miles traveled aren’t rising as fast as we thought.

Both groups found plenty to worry about when the 1990 Nationwide Personal Transportation Survey (NPTS) results were published-VMT apparently grew by 41% between 1983 and 1990. But is this true?

My research develops three alternative estimates of VMT growth. All three estimates agree closely with each other, but disagree with the NPTS results. I find that VMT per vehicle grew at only half the rate indicated by the NPTS.

What made the NPTS estimates too high? Budgetary constraints forced them to use telephone surveys instead of household surveys. Internal evidence in the phone survey data shows that high-income (hence high-VMT) households were over-sampled, thus producing an overestimate for the VMT of average households.

As my first check on the NPTS results, I developed a VMT estimate for California. The data come from California’s statewide, biennial smog-check inspections, involving nearly twenty million vehicles. Each inspection report contains the vehicle’s odometer reading and its license plate number. By matching cars across inspections, we have two odometer readings and two dates, and can compute an objective VMT rate.1

After computing VMT for each vehicle, we aggregated the data to compute an average VMT by model-year and class (cars, light trucks, medium trucks). To compensate for any selection bias, we scaled these to state-level using the exact class and model-year distribution from vehicle registration data.

The calculated VMT growth rate for California was 1.6% per year, well below the 2.7% annual growth rate indicated by the NPTS survey. Does California’s VMT growth differ from U.S. VMT growth? Perhaps. But if it does differ, most observers would have expected California’s growth to be atypically high. Next, I turned to a nationwide sample.

For my second check on the NPTS results, I used the U.S. Department of Energy’s Residential Transportation Energy Consumption Survey

(RTECS). Only 3,000 households were surveyed. But, for purposes of VMT estimation, the RTECS data ought to have several advantages over the NPTS. The household sample comes from a national multistage probability survey, rather than from random-digit dialing; the initial interview is a personal interview in the home; and the great majority of the VMT data are based on actual odometer readings, taken about a year apart. Thus, like California’s, this survey is an objective source of VMT data. The NPTS data are subjective, based on respondent’s recollections of miles driven.

The Federal Highway Administration (FHWA) collects VMT statistical data from the fifty states, compiles them, and publishes them in Highway Statistics. The state VMT estimates are derived from fuel-consumption data, supplemented by sample traffic counts. The states have improved the quality of these estimates over time, but they still rely heavily on estimates of parameters – for example, average miles per gallon – rather than on actual measurements. (California has an elaborate model to estimate the average miles per gallon of its vehicle fleet.) 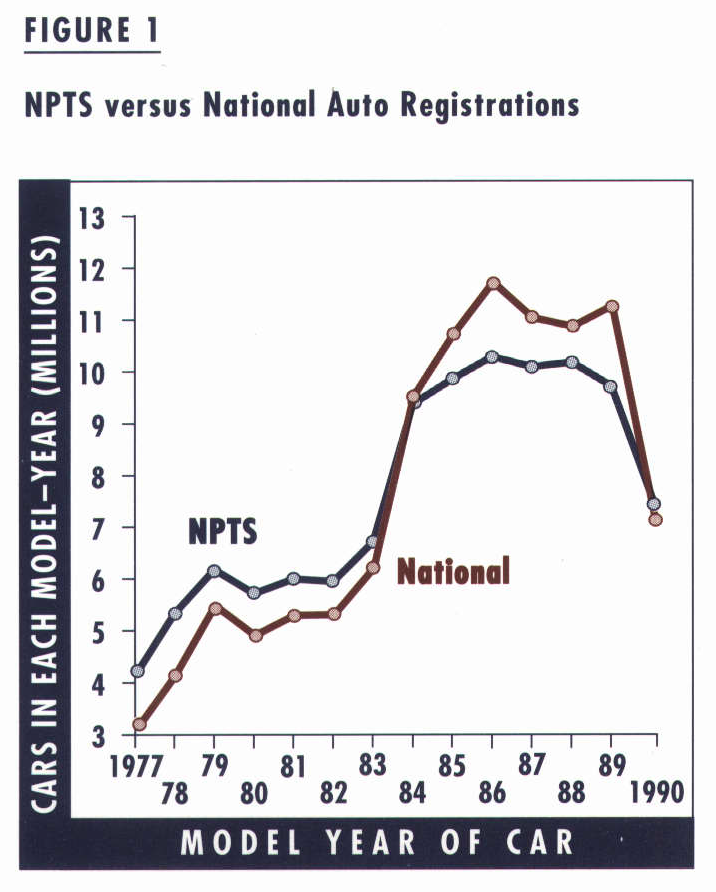 Given the uncertainties in the data sources, I would not use these as a primary standard. But, taken in combination with the other results, they do provide a useful comparison. Estimates of VMT growth rates based on the FHW A data are nearly identical to my other estimates: 1.4% FHWA, 1.5% RTECS, 1.6% California, compared to 2.7% reported by NPTS.

Therefore, the results from analyzing three alternative data sets appear strikingly similar with one another, but show a VMT growth rate that is only about half as fast as the NPTS estimate.

Why are the NPTS Results too High?

What are the possible sources of error? First, the NPTS estimate is based on subjective data. Respondents are asked: “How many miles did you drive last year?” There are good reasons to doubt the reliability of respondents’ answers to such a subjective question concerning an activity that they do not usually consider in quantitative terms. Still, any subjectivity problem ought to be constant over time; that is, growth rates should be unbiased.

Unfortunately, severe budget pressures caused a change in methodology in 1990. All the prior NPTS data had been collected using home interviews, but in 1990 they switched to telephone interviews based on a random-digit dialing. Inherently, random digit dialing contacts a disproportionate number of high-income households: high-income households have several phones per household, while low-income households often share a phone with other households. Survey organizations use a variety of techniques to compensate for these biases, but sometimes the correction techniques are not sufficient. 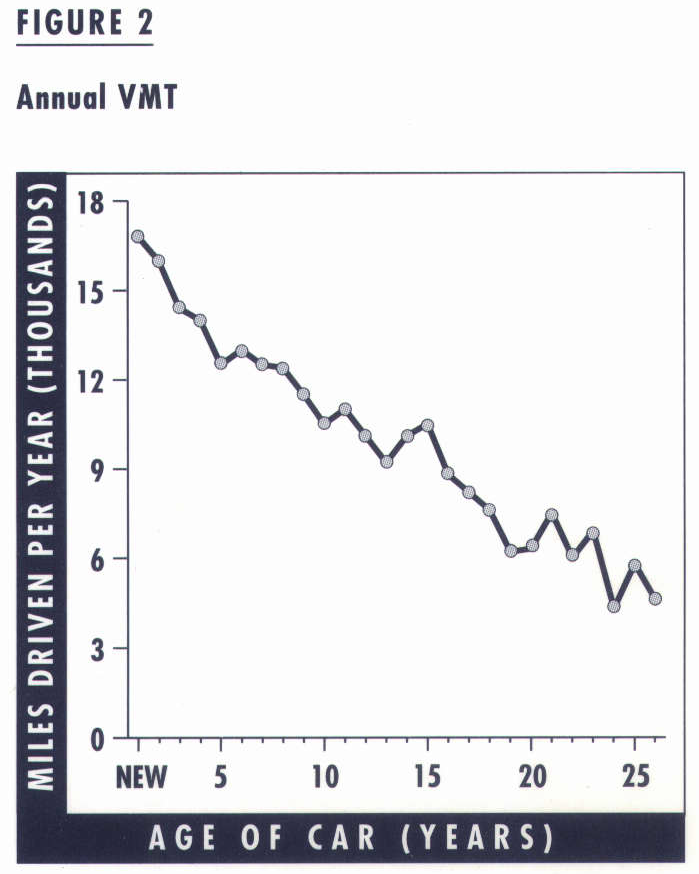 What are the consequences of oversampling new vehicles in the NITS? Figure 2 shows the relationship between vehicle age and yearly VMT: As vehicles age they are driven significantly less. Since the average car in the 1990 NPTS is newer than it ought to be, the 1990 NPTS will overestimate VMT per vehicle.

Table 1 summarizes the VMT estimates from the four data sets. The table shows the VMT per year estimates and the year to which they apply. On the right side of the table are the growth rates for the longest period applicable to each data set. Where intermediate points were available, they are shown, and the intermediate growth rates are also calculated.

But truth is not simply based on a three to one vote. The RTECS and California data sets are inherently higher quality than the NPTS because they collect objective odometer data. The NPTS is based on subjective VMT estimates and there was a critical change in sampling methods between 1983 and 1990. The 1990 NPTS survey used random-digit dialing, instead of home interviews, resulting in significant over-sampling of late-model, high-VMT vehicles.3

Charles Lave, “What Really is the Growth of Vehicle Usage?.” Forthcoming in Transportation Research Board.