Streets with stop signs are safer, but not necessarily better, for cyclists.

A bike commuter has a lot to consider before leaving for work. What route to take, considering hills and traffic? What clothes to wear, considering ease of movement, comfort, perspiration, distance, and weather? But these questions fade when compared to the safety, speed, and energy issues bicyclists deal with en route. Transportation planners know that incorporating bicycles into the transportation system can help ease traffic congestion by substituting bikes for cars; they also 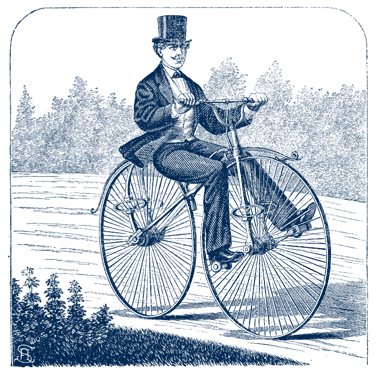 know that mixing cars and bikes can be tricky.

But they seldom account for the bicyclist’s concerns-matters that don’t occur to the typical car-driving planner. Unless planners take bicyclists’ concerns seriously, their efforts will do little to increase the numbers of bicycles or help bicyclists and drivers coexist safely.

Take a simple stop sign. For a car driver, a stop sign is a minor inconvenience, merely requiring the driver to shift his foot from gas pedal to brake, perhaps change gears, and, of course, slow down. These annoyances may induce drivers to choose faster routes without stop signs, leaving the stop-signed roads emptier for cyclists. Consequently streets with many stop signs are safer for bicycle riders because they have less traffic. Indeed, formal bike routes typically include traffic-calming devices like barriers, speed bumps, and stop signs to discourage car traffic and slow down those cars that remain. However, a route lined with stop signs is not necessarily desirable for cyclists. While car drivers simply sigh at the delay, bicyclists have a whole lot more at stake when they reach a stop sign.

Bicyclists can work only so hard. The average commuting rider is unlikely to produce more than 100 watts of propulsion power, or about what it takes to power a reading lamp. At 100 watts, the average cyclist can travel about 12.5 miles per hour on the level. When necessary, a serious cyclist can generate far more power than that (up to perhaps 500 watts for a racing cyclist, equivalent to the amount used by a stove burner on low). But even if a commuter cyclist could produce more than a 100 watts, she is unlikely to do so because this would force her to sweat heavily, which is a problem for any cyclist with- out a place to shower at work.

With only 100 watts’ worth (compared to 100,000 watts generated by a 150-horsepower car engine), bicyclists must husband their power. Accelerating from stops is strenuous, particularly since most cyclists feel a compulsion to regain their former speed quickly. They also have to pedal hard to get the bike moving for ward fast enough to avoid falling down while rapidly upshifting to get back up to speed.

For example, on a street with a stop sign every 300 feet, calculations predict that the average speed of a 150-pound rider putting out 100 watts of power will diminish by about forty percent. If the bicyclist wants to maintain her average speed of

12.5 mph while still coming to a complete stop at each sign, she has to increase her output power to almost 500 watts. This is well beyond the ability of all but the most efficient cyclists.

We decided to test these calculations on an officially designated bike route in Berkeley, California Street.The street is about 2.24 miles long and nearly flat (average grade is 0.5 percent).  Traffic is very light, which is nice for cyclists. But California Street has 21 stop signs and a traffic light. More than two-thirds of the route’s 31 intersections require a stop—that’s one every 530 feet. A parallel route, Sacramento Street, runs one block west of California Street. Sacramento has four lanes of traffic and can be very busy, especially during rush hours. With cars parked along both sides of the street, Sacramento has little room for cyclists. But it has only eight traffic lights along the section parallel to California’s bike route, and no stop signs. Since on average, only half the lights will be red, there’s only one stop every 2,800 feet.

One of us (Joel Fajans) found that keeping exertion constant1, 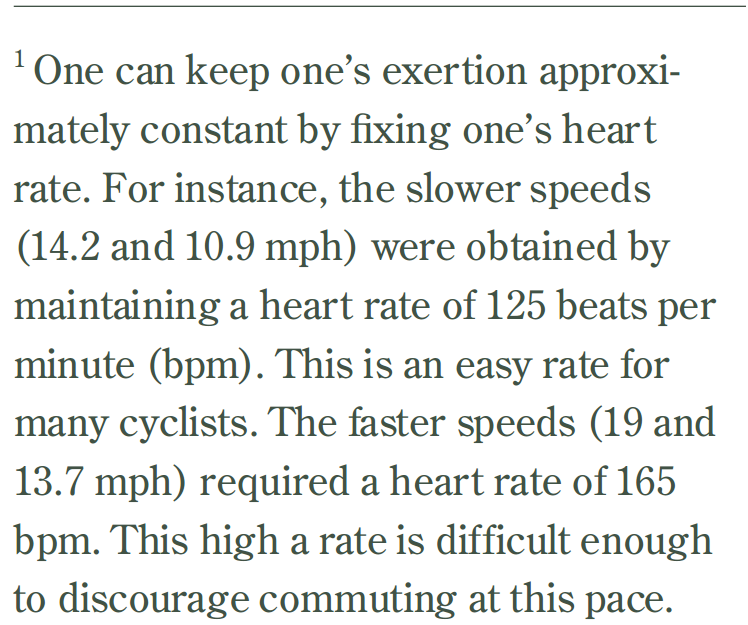 he could ride on Sacramento at an average speed of 14.2 miles per hour without straining. At the same level of exertion, his speed fell to 10.9 mph on California if he stopped completely at every sign. Thus Sacramento was about 30 percent faster than California. By increasing his exertion to a fairly high level, his average speeds increased to 19 mph on Sacramento and 13.7 mph on California, so Sacramento was then 39 percent faster. While a drop of a few miles per hour may not seem like much to a car driver, think of it this way: the equivalent in a car would be a drop from 60 to 45 mph. Because the extra effort required on California is so frustrating, both physically and psychologically, many cyclists prefer Sacramento to California, despite safety concerns. They ride California, the official bike route, only when traffic on Sacramento gets too scary.

These problems are compounded at uphill intersections. Even grades too small to be noticed by car drivers and pedestrians slow cyclists substantially. For example, a rise of just three feet in a hundred will cut the speed of a 150-pound, 100-watt cyclist in half. The extra force required to attain a stable speed quickly on a grade after stopping at a stop sign is particularly grating. 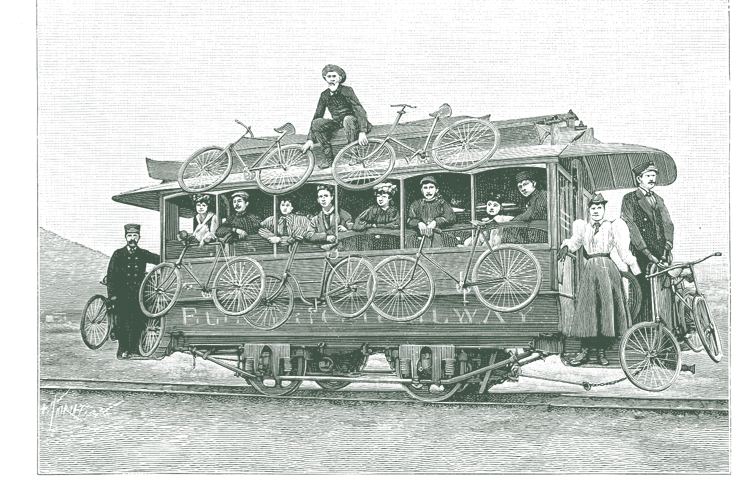 One way cyclists conserve their energy at stop signs is to slow down, but not stop. A cyclist who rolls through a stop at 5 mph needs 25 percent less energy to get back to 10 mph than does a cyclist who comes to a complete stop. Blasting through a stop sign is a bit dangerous (though less dangerous than it seems because visibility at most intersections is good from a 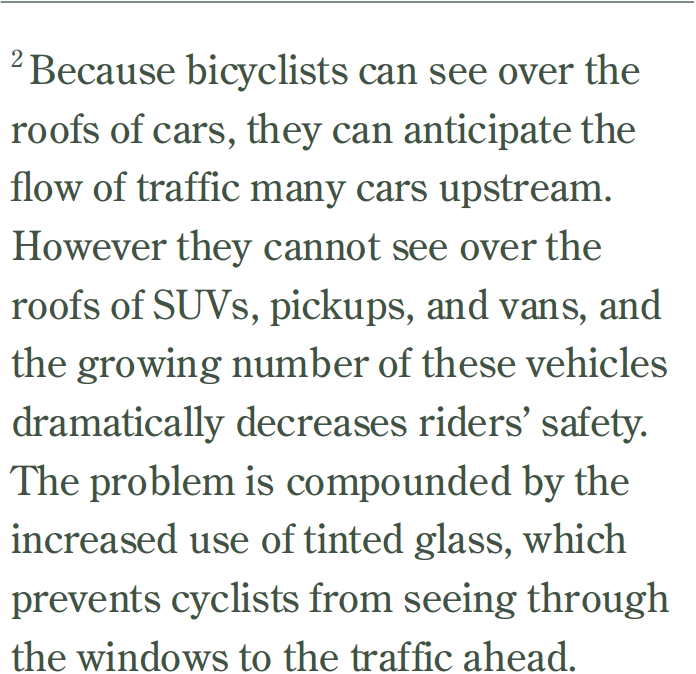 bicycle2, and if the cyclist has slowed to some reasonable speed, there’s typically plenty of time to stop.) Of course a sensible cyclist will always slow substantially at a stop sign if there’s a car anywhere nearby. But the car-bike protocol at stop signs is not clear. Drivers (and bicyclists) are unpredictable. Will drivers take turns with bikes in an orderly way as they do with other cars? Will they start to go, notice the bicyclist, and suddenly stop again to wait, whether the cyclist is stopped or not? Will they roll through the stop without seeing the bicyclist? Will they roll through the stop even though they see the bike? An experienced cyclist knows anything is possible. For example, if she guesses correctly that the car will wait for her, she’ll want to start pedaling again as soon as possible, preferably without having slowed much, thereby conserving energy and inertia. Indeed, traffic flow is improved where cyclists do not come to a complete stop, for drivers need not wait long for the bikes to clear the intersection.

Clearly, stop signs are tricky for bicyclists. On one hand, they increase safety by decreasing the number of cars on a road, and slowing the remaining ones. On the other hand, they make cyclists work much harder to maintain a reasonable speed. For a commuter choosing between a car and a bicycle, the extra exertion can be a serious deterrent.

Car drivers say they are confused by the presence of bicycles on the road, and some wish the two-wheelers would just go away. Bicyclists know that cars cause most of their safety concerns. Traffic planners need to find ways to help bikes and cars coexist safely. A good place to begin is by taking the special concerns of bicyclists seriously, and not assuming that they will be served by a system designed for cars. Reducing the number of stop signs on designated bike routes would make bicycle commuting considerably more attractive to potential and current riders. Allowing bicyclists to treat stop signs as yield signs, as some states do, could solve the problems in a different way.

Perhaps cities should buy bikes for their traffic engineers and require that they ride them to work periodically. There’s probably no better way for them to learn what it’s like to ride a bike in traffic than actually to experience its joys and hazards.

Joel Fajans is professor of Physics at the University of California, Berkeley (joel@physics.berkeley.edu)