Including solar panels in parking lots can provide a surge of extra power.

Solar panels have begun to find a new place in the sun—on parking lots surrounding commercial and industrial buildings, mounted on canopies providing shade for the parked cars. Parking lots in asphalt-rich cities have great solar potential because the panels can be oriented to maximize power production during summer afternoons when electricity is most valuable. Solar-powered parking lots can mitigate the substantial increase in peak-hour energy demand that major developments create, but few developers now install solar canopies over their parking lots. Although the demand for electricity peaks on days when the sun shines brightest, solar power accounts for less than 1 percent of our total electricity supply.

How can cities increase power production from parking lots? They can incorporate solar power into their off-street parking requirements. Cities already specify a minimum number of parking spaces for every building, the minimum size of the spaces, and their landscaping. Cities could also specify that a share of these spaces be covered with solar panels to meet the increased peak-hour power demand created by new buildings. 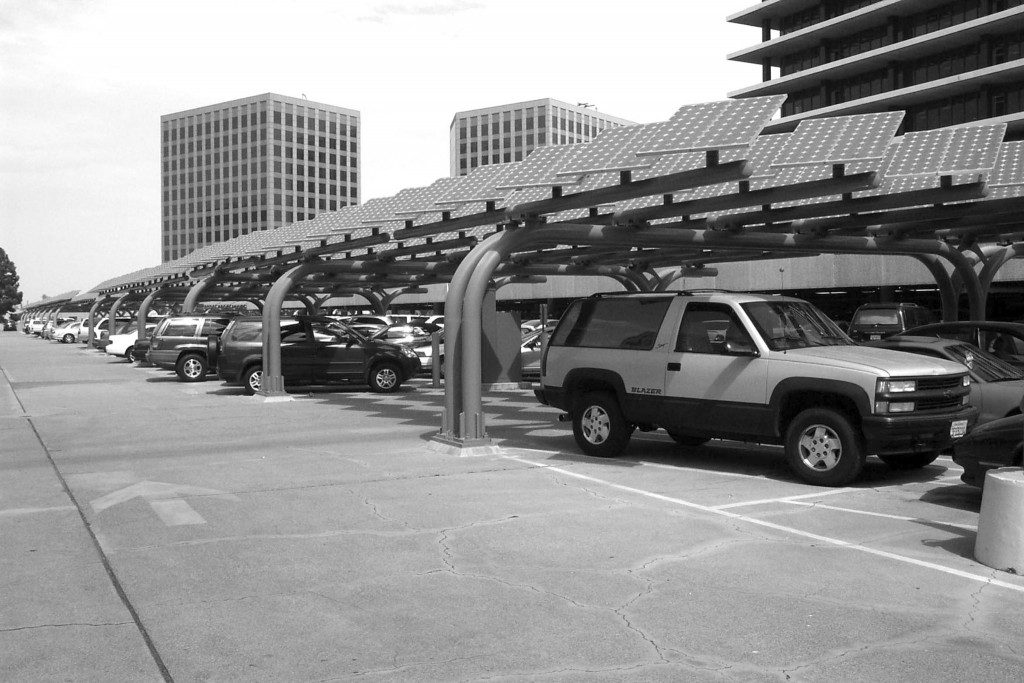 Cities can amend their zoning codes to require solar power in the parking lots of new buildings. Requiring a specific electric generating capacity, such as 1 kilowatt per parking space, will give developers the freedom to meet the requirement in the most cost-effective way. (Covering one parking space with solar panels will produce about 2 kilowatts of generating capacity, so covering half the spaces in a parking lot will produce about 1 kilowatt per space.) Because the solar potential of a parking lot depends on many factors, such as climate and topography, solar power requirements would differ among locations and land uses, just as off-street parking requirements do. Cities should not adopt solar requirements in all locations and for all land uses, but sunny areas with large parking lots are a good place to start. Cities can also offer developers who prefer not to install solar panels on their parking lots the option to pay for equivalent renewable energy or conservation measures elsewhere, perhaps at a school or other public building.

Cities should not adopt solar requirements in all locations and for all land uses, but sunny areas with large parking lots are a good place to start.

If each solar canopy has an electric-vehicle charging station at its base, the solar parking requirement will help to distribute charging stations throughout the city. In California, one solar-covered parking space can generate about 5 kilowatt-hours of electricity a day, which is enough to drive an electric vehicle for about 20 miles. Solar canopies at work can therefore fuel the trips to and from work for many commuters’ electric cars. California requires that, by 2025, 15 percent of all cars sold in the state must have zero tailpipe emissions, and other states are adopting similar requirements. Solar canopies over parking lots can provide some of the electricity needed for these cars without straining the grid’s generation and distribution systems.

The intermittent nature of solar power output makes it well suited to charging electric cars. If the solar energy is being stored in batteries rather than fed into the electric grid, the power fluctuations caused by clouds will not cause stability problems for the grid. The solar power output can also directly charge batteries without the power loss caused by conversion to alternating current for the grid. 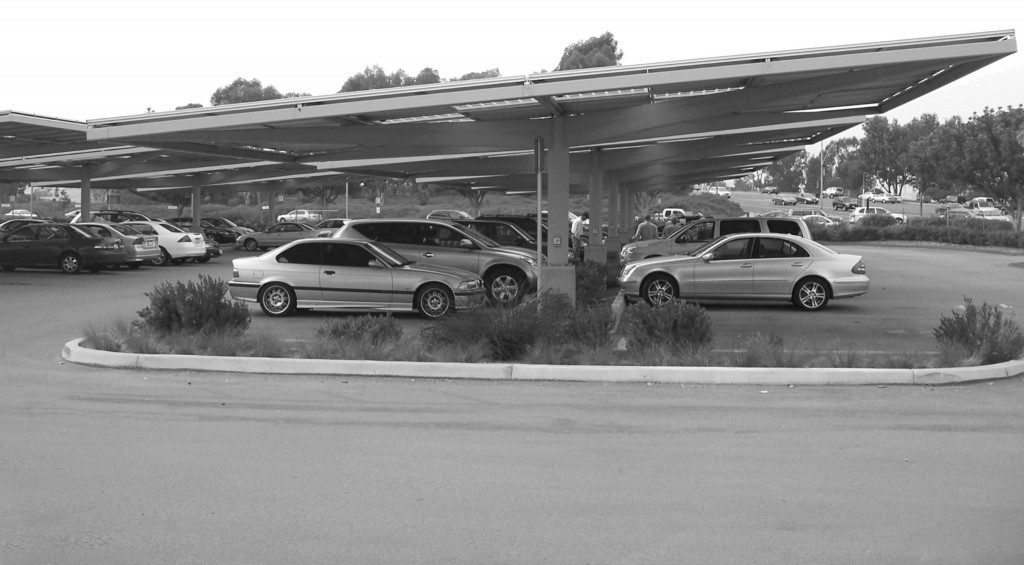 The federal government and many state governments provide generous subsidies for solar panels, so developers will not have to pay the full cost of complying with a city’s solar parking requirement. Because parking lots are usually bigger than the buildings they serve, and usually have unobstructed solar access, the solar panels can take advantage of economies of scale in construction and can capture more of the available sunlight. In contrast, few houses have properly oriented roofs, unobstructed solar access, and the structural capacity to support solar panels. Therefore, parking lots will generate more electricity per dollar of government subsidy than houses can. Solar canopies not only produce power but also reduce the demand for it. Shading parked cars will reduce the use of air conditioning by motorists when they leave the solar parking lots on sunny days, resulting in better fuel efficiency and reduced tailpipe emissions. The canopies can also reduce the heat island effects of parking lots around buildings, and thus reduce air conditioning demand in the buildings.

Reducing the demand for energy from the electric grid will also reduce power plant emissions that contribute to air pollution and climate change.

Beyond their economic advantages, solar-powered parking lots will be a decentralized source of back-up electricity in an emergency, such as a natural disaster or terrorist attack. Reducing the demand for energy from the electric grid will also reduce power plant emissions that contribute to air pollution and climate change. Some states require electric utilities to obtain a specific share of their energy from renewable sources, and solar parking lots can help satisfy these requirements.

Solar panels in parking lots will start producing power far sooner than conventional power plants, which take years to construct. Solar parking lots distributed throughout the city will also generate electricity right where it is used, reducing transmission losses on the power grid and helping to prevent power outages caused by overloaded transmission lines. Because solar panels produce the most electricity on sunny days when the demand for air-conditioning peaks, they reduce the load on conventional power plants at the most critical time. With only a slight change to the parking requirements in their zoning ordinances, cities can lead the way toward a future powered by renewable energy. We shouldn’t wait until the next heat wave to think about getting solar power from our parking lots.