A Driving Factor in Moving to Opportunity

Does moving to a wealthier neighborhood mean you’ll be better off?

In 1992, the US Congress authorized the Moving to Opportunity (MTO) housing voucher program to operate in five large metropolitan areas: Baltimore, Boston, Chicago, Los Angeles, and New York. The MTO program represented a radical departure from standard housing assistance programs, which clustered participants in very poor neighborhoods that offered few opportunities. Running counter to previous policy, MTO used an experimental framework to assess how moving households on assistance to low-poverty neighborhoods can affect their employment, education, and household income. Under the program, residents were randomly assigned into three groups. The first group received housing vouchers that could be used only in neighborhoods with poverty rates under 10 percent. The second group received similar housing vouchers but with no neighborhood restrictions. The third group did not receive vouchers but remained eligible for public housing and other social programs. 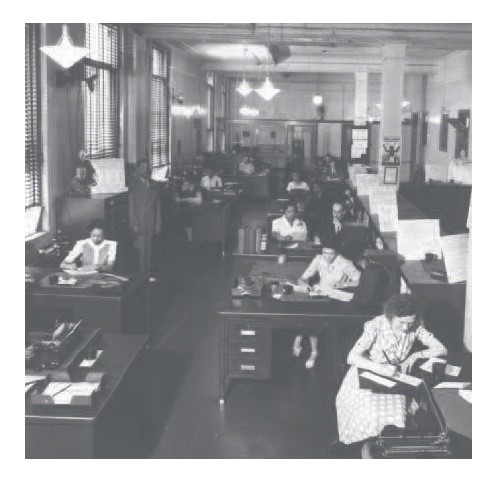 Despite great fanfare surrounding the MTO program, numerous studies have found that the difference between these housing voucher options had no effect on households’ economic outcomes. There are several explanations for the program’s disappointing results. The rate at which recipients successfully used vouchers to lease an apartment was only 38 percent among traditional voucher recipients and only 32 percent among voucher recipients who were required to move to low-poverty neighborhoods. Moreover, most people who did move quickly moved out of low-poverty neighborhoods due to a lack of reliable transportation and weak social ties in these new areas. They thus spent little time in neighborhoods with high levels of access to education, racial diversity, or jobs.

Previous assessments of MTO programs, however, have not explicitly examined the influence of transportation access on households’ economic outcomes. Using data from the MTO program, we examine whether automobile availability and public transit access affect employment status between the baseline (1994) and interim (2000/2001) surveys. Additionally, we test whether the voucher group in low-poverty neighborhoods was more likely to benefit from automobile access compared to other households, since low-poverty neighborhoods frequently have limited access to transit.

Efforts to improve the employment conditions of low-income families often center on bolstering the labor market, increasing wages, improving educational attainment, and stabilizing family structure. Past research suggests, however, that cars can also play an important role in facilitating employment.

The population within US metropolitan areas has spread out geographically since the 1960s, elevating the importance of cars in accessing regional opportunities. Low-income families have also suburbanized. As Figure 1 shows, however, a slight majority of the poor within metropolitan areas remain in central-city neighborhoods. Living in core urban areas allows households to take advantage of available affordable housing and—for those lacking a car—access to relatively high levels of public transit service.

Cars are often the only practical mode of transportation to dispersed job sites.

As cities have spread, however, jobs have dispersed. The low-income residents who stay behind in urban areas can end up being disconnected from suburban employment opportunities. Cars are often the only practical mode of transportation to these dispersed job sites. Even in cities with ample transit service such as Boston and San Francisco, transit is generally slower and less reliable than driving.

Cars make it easier for low-income households to search for and regularly commute to jobs, which increases employment rates. Conversely, employment can provide households with the necessary resources to purchase cars; income is one of the strongest correlates of car ownership. Yet the importance of cars for employment persists even in studies that control for the two-way relationship between car ownership and employment decisions.

Automobile ownership in the United States has become nearly ubiquitous. Even among adults living below the poverty line, 80 percent lived in a household with a vehicle in 2010, compared to 50 percent in 1960. While over six million poor adults live in households without a car, 30 percent of these adults still commute by car, either via carpooling or by borrowing vehicles. A slightly higher percentage commute by public transit, suggesting that proximity to transit is essential to their mobility

The few studies that directly compare the relative benefits of cars and public transit, however, find that car access better facilitates job acquisition and job retention compared to transit. Cars may be particularly important for voucher recipients who, compared to public housing residents, tend to live in more spatially dispersed neighborhoods. MTO participants who moved to low-poverty neighborhoods often found themselves far from bus stops and in neighborhoods where buses ran infrequently. Consequently, many MTO families experienced the stress of more difficult transit trips to work. 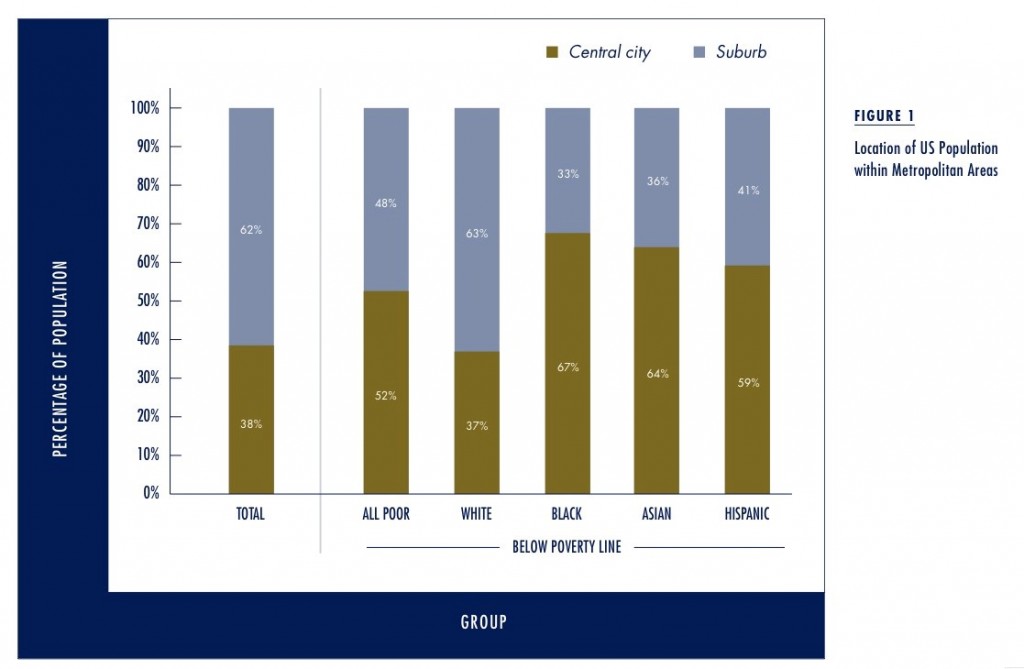 In our analysis, we use data from the 1994 and 2000/2001 MTO surveys to examine the relationship between changes in car ownership, transit access, and full-time employment for 3,199 households. We supplement this information with data on neighborhoods where program participants live.

We focus on two variables: changes in car ownership, and residential relocation to neighborhoods with improved public transit. Both MTO surveys asked households whether they had a car. The baseline survey also asked participants whether they lived within 15 minutes walking time of a bus stop. In addition to self-reported transit proximity, we include a transit supply measure from the Brookings Metropolitan Policy Program. Using these data, we test whether there is a positive relationship between employment rates and moving to neighborhoods with improved transit access.

We first outline trends in full time employment and our transportation variables: car and public transit access. Figure 2 shows that nearly one-third of the sample gained a job by 2000/2001, while over half remained unemployed. 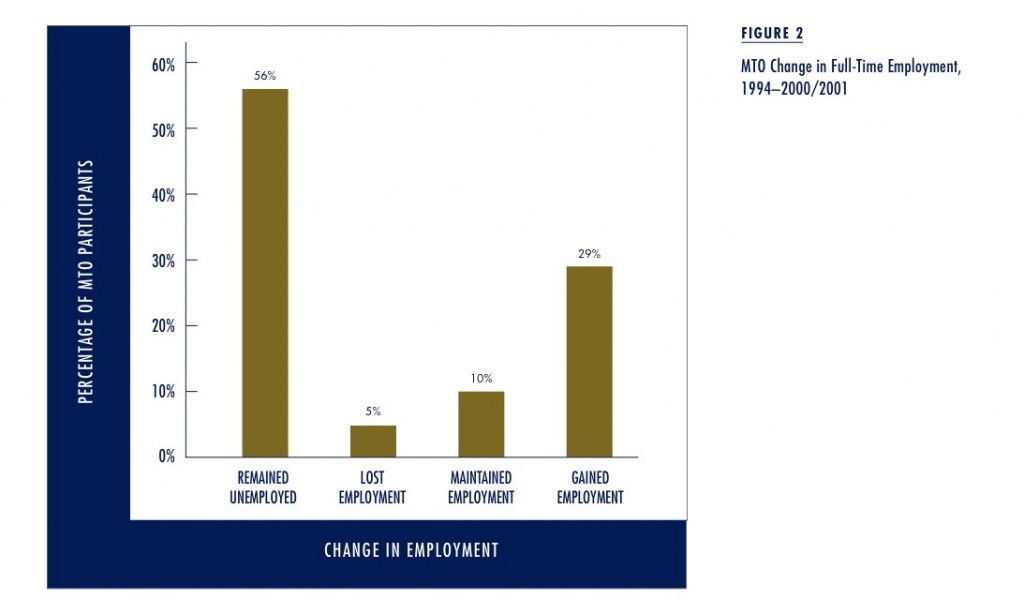 Figure 3 shows the change in car ownership between 1994 and 2000/2001 for the entire sample. While over a quarter of the group gained a car between the two time periods, more than half the sample remained without a car at both time periods. Rates of car ownership are substantially lower among the MTO sample than among the general population of low-income individuals. This finding mirrors data from the 2000 Public Use Microdata Sample of the US Census, which show that approximately 75 percent of adults living below the poverty line had access to a household vehicle, while only 57 percent of low-income adults who receive public assistance lived in households with a car. Additionally, the MTO sample had a lower average income than both the general voucher population as well as people living below the poverty line, which may in part explain the very low car ownership rates observed. 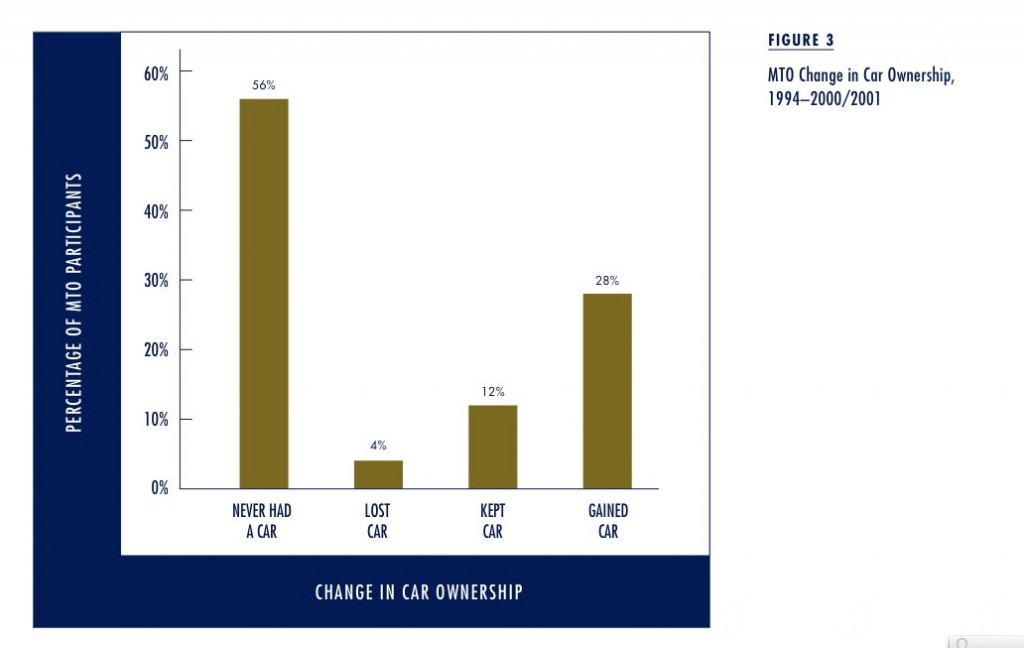 Finally, just over 20 percent of the sample moved to neighborhoods with better access to public transit. Unexpectedly, participants with and without cars were equally likely to move to transit-richer neighborhoods.

We next tested the relationship between transportation access and employment outcomes among MTO households, after controlling for other determinants of employment. Consistent with previous evaluations of the MTO program, receiving a geographically-restricted voucher was not significantly correlated with job gains or job retention. Table 1 summarizes the transportation results of our regression model. Gaining a car between 1994 and 2000/2001 and maintaining access to a car at both time periods are positively and strongly correlated with finding employment and being employed. The presence of a car raises the probability of finding a job by a factor of two, and of being employed at both time periods by a factor of four.

While improved transit access is not a significant factor in finding employment, it appears to be the most important factor associated with being employed at both time periods. Moving to a neighborhood with better transit between baseline and interim and living within 15 minutes of a bus stop both greatly raise the probability of having consistent employment.

Evidence from the MTO experiment shows that transportation assets play a major role in gaining and maintaining employment for subsidized housing recipients, whereas both previous research and our study find that housing assistance itself had little effect. The model results also show a strong relationship between relocating to transit-richer neighborhoods and remaining employed. People with jobs may strategically relocate to neighborhoods where they can more easily use public transit for their commute. Policies to enable household moves to transit-rich neighborhoods will help participants retain employment.

Policies to increase car access among low-income households will most clearly enhance job gain and retention even in large metropolitan areas.

On the other hand, among unemployed participants, moves to transit-richer neighborhoods do not appear to increase the likelihood of employment. This finding may reflect transit’s failure to connect families to opportunities in an increasingly dispersed labor market. Or transit may only facilitate employment in neighborhoods where service levels cross a particular supply threshold. Although MTO metropolitan areas are large and have relatively high levels of transit service, not all neighborhoods are equally well served. 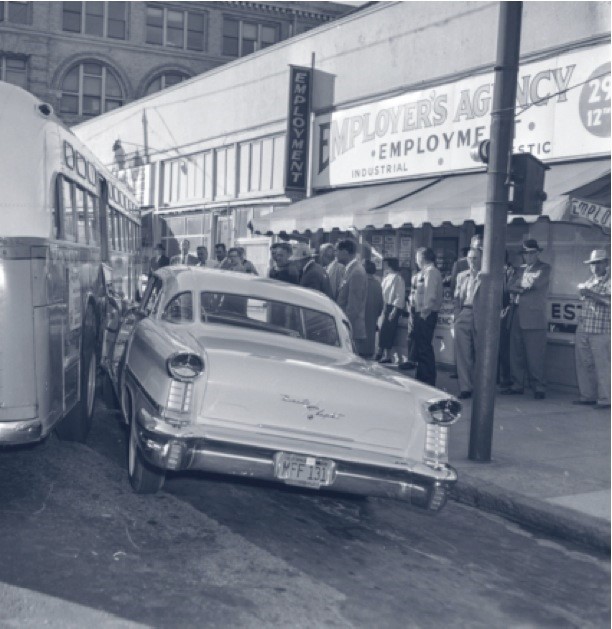 Thus far, policy efforts to coordinate housing and transportation have largely centered on public transit. But policies to increase car access among low-income households will most clearly enhance job gain and retention even in large metropolitan areas, such as MTO study areas, and in dense urban neighborhoods where public housing is located. Additional evidence shows that enabling car ownership by reducing the asset restrictions for families receiving public assistance and by providing low-income auto loans and subsidies can increase employment among the poor. Financing assistance policies may also help families buy cars. Moreover, policies to increase car access—rather than ownership—can provide many of the benefits of cars without the high costs of ownership. These policies might include efforts to promote car sharing, ride sharing, and car leasing.

Many, if not most, policymakers and planners loathe policies and programs that promote car use, which contribute to traffic congestion, air pollution, sprawl, and high transportation costs. There are many good reasons for these concerns. Yet the responsibility for mitigating the negative externalities of cars should not be shifted to low-income families—the people who currently use cars the least and, as the evidence shows, need them the most.

This article is adapted from “A Driving Factor in Mobility? Transportation’s Role in Connecting Subsidized Housing and Employment Outcomes in the Moving to Opportunity (MTO) Program,” originally published in the Journal of the American Planning Association.

Evelyn Blumenberg and Gregory Pierce. 2014. “A Driving Factor in Mobility? Transportation’s Role in Connecting Subsidized Housing and Employment Outcomes in the Moving to Opportunity (MTO) Program,” Journal of the American Planning Association, 80(1): 52–66.

Greg Pierce is Senior Researcher in the Luskin Center for Innovation and an Adjunct Assistant Professor in the Department of Urban Planning at the University of California, Los Angeles (gspierce@ucla.edu).