#DemandManagement can help airlines and airports save costs and reduce environmental impact.

Airports can manage air traffic congestion in two ways: 1) add infrastructure or 2) manage flight demand. The environmental and economic implications of these options, however, often conflict. New runways have significant financial and environmental costs, but they can also stimulate economic development and increase a city’s appeal to businesses. Managing demand saves construction costs and encourages fuel efficiency but may limit opportunities for regional growth. Our research finds that airports in the US underestimate or ignore these tradeoffs and, as a result, frequently fail to consider managing demand as an alternative to building new runways.

Following federal deregulation in the 1970s, airlines increased their use of hub-and-spoke operations. Rather than offering a nonstop route, flights connect through hub airports. Deregulation allowed airlines to set their own routes, service frequency, and type of aircraft. As a result, fares fell, services increased, and the demand for air travel surged. Increased flight frequency at hubs, however, created congestion and exacerbated environmental impacts such as noise, air pollution, and greenhouse gas emissions. While airlines can benefit from expanding hub airport capacity, it is unclear whether it is the best long-term solution to airport congestion. One alternative is for airports to manage demand.

Airports and the Federal Aviation Administration (FAA) currently have two strategies to manage demand: 1) caps on flights and 2) congestion pricing. The FAA has sole authority to cap the number of flights at an airport. FAA policy, however, does not support caps as a long-term solution, stating that caps are not in the public interest and should be imposed to alleviate air traffic delays only after other alternatives have been tried.

FAA policy is clear: building capacity is preferred to either congestion pricing or flight caps.

As an alternative to caps, the FAA allows airports to charge congestion fees for landings during peak hours. Congestion charges encourage airlines to 1) shift their flights from peak to off-peak hours, 2) use larger aircraft to consolidate flights, 3) shift traffic to other airports  in the region, or 4) eliminate flights altogether. While the FAA allows congestion pricing, the agency does not promote it, stating that such pricing should be employed only when “airport development projects cannot be built in time to prevent congestion.” Furthermore, the FAA limits the total revenue that airports can collect from congestion charges. No US airports currently charge congestion fees.

FAA policy is clear: building capacity is preferred to either congestion pricing or flight caps. As stated in the FAA Authorization Act of 1994, “It is FAA policy that projects that increase [airport] capacity be undertaken to the maximum feasible extent so that safety and efficiency increase and delays decrease.”

Airports have two opportunities during the planning process to evaluate the tradeoffs between adding capacity and managing demand. The first is with an Environmental Impact Statement (EIS). When an airport sponsor—usually a city government or an airport authority—proposes to construct a new runway, it must prepare an EIS in cooperation with the FAA. An EIS includes a detailed description of the proposed project’s environmental and socio-economic impacts, as well as the impacts of all feasible project alternatives and the no-build scenario. An EIS is required for airports to comply with the National Environmental Policy Act (NEPA) and to maintain eligibility for federal funds.

To complete an EIS, the FAA and airport sponsor must craft a Purpose and Need Statement to define project objectives and the overarching problems that motivate the project. The EIS must also include alternatives to the preferred project design. Alternatives may include different runway configurations, demand management strategies such as congestion pricing, or other actions that satisfy the project objectives. Airports begin the analysis by evaluating whether the alternatives are technically and economically possible and whether they satisfy the EIS’s Purpose and Need Statement. The alternatives that are deemed feasible advance to the next stage for a full environmental review.

It should be noted, however, that while all airports must prepare an EIS to receive FAA funding for expansion, not all regions require a RASP. Even among those that do, there is no guaranteed coordination between regional planning and airport expansion efforts. Federal funding for regional airport capacity studies and runway construction projects are both funded through the same federal program. The division between the two, however, is anything but equal. From 1992 to 2009, 32 percent of total FAA airport improvement funding went to runway construction, while less than 2 percent supported planning activities.

A Poor Record of Evaluating Tradeoffs 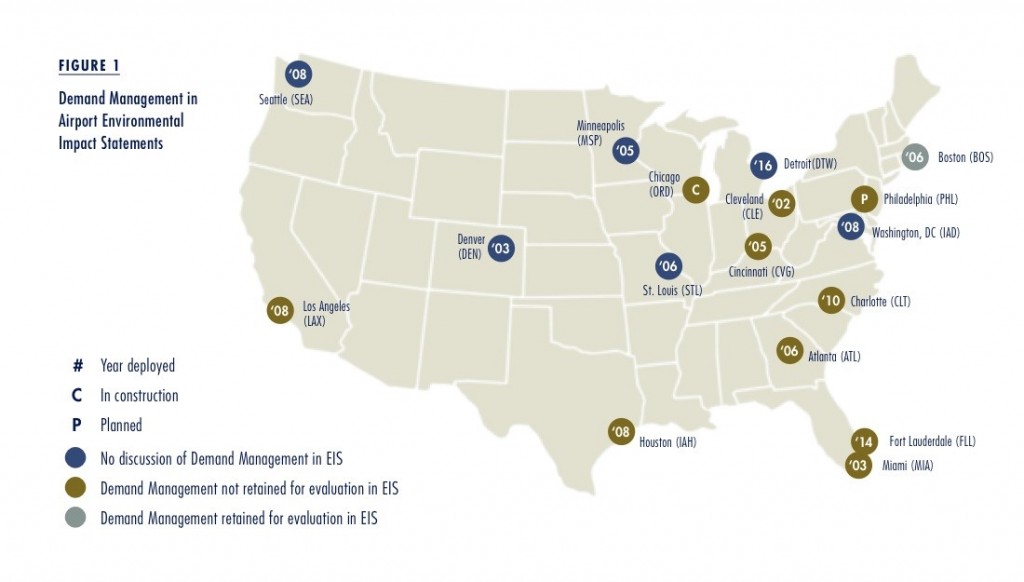 We collected EISs from the 35 US airports the FAA classified as “nationally significant,” meaning their congestion and delay can spread and cause delays at airports around the world. These airports can reasonably be expected to assess demand management as an alternative to adding capacity. Of the 17 airports that increased or planned to increase runway capacity after 2000 and completed an EIS (Figure 1), only one—Boston Logan International Airport—conducted a comprehensive analysis of demand management as an alternative to a new runway.

The New England Airport Coalition, formed in 1994, includes the six New England state aviation agencies, all airport sponsors with scheduled jet passenger service, and a regional economic development council. One of the airport sponsors is Massport, the port authority responsible for Boston Logan Airport. From 2002 to 2006, the regional coalition published two phases of their New England Regional Air Service Study, part of a RASP that ran parallel to Massport’s EIS preparation. The study analyzed underutilized regional airports in New England, documented their available capacity, and assessed the economic impact of shifting service from Logan to those airports. Massport stated that this regional planning effort allowed them to understand the impact of demand management at Logan and thus incorporate peak pricing into their EIS.

Why Do Airports Reject Demand Management?

Some airports mention demand management in their EIS but state it is not a feasible alternative to building a runway. Others avoid the subject altogether. Three overarching barriers cause airport sponsors to reject demand management as an alternative to runway growth: 1) narrow Purpose and Need Statements; 2) policy conflicts and uncertainty; and 3) emphasis on airports as a tool for regional economic development.

Narrow Purpose and Need Statements indicate a deeper conflict between the National Environmental Policy Act’s procedural requirements and its core objectives. If airport sponsors define project goals in ways that preclude feasible project alternatives, they may be following the letter of NEPA law but not its spirit of environmental stewardship. Additionally, there are legal incentives to produce narrow Purpose and Need Statements. Judges generally defer to the FAA in approving these statements and in interpreting the feasibility of alternatives.

The alternatives analysis in the EIS can generate useful, policy-changing information only if the Purpose and Need are broad enough to entertain nontraditional solutions. As an example from another agency, in 1986, a US Forest Service EIS documented the hazards of herbicides and suggested alternatives that were both reasonable and environmentally superior. The findings prompted the agency to support nonchemical approaches to vegetation management whenever possible rather than accepting herbicides as the only solution. Planners and stakeholders can do something similar by considering a shift in traffic from major airports to regional ones in the EIS alternatives analysis. This analysis can help show the value of demand management.

Four of the eleven EIS documents that initially considered demand management cited legal uncertainties as a reason not to advance it as a feasible alternative. Of these, three airports—Fort Lauderdale-Hollywood, Chicago (O’Hare), and Philadelphia—discussed how federal law explicitly promotes increasing capacity. Additionally, the FAA restricts airports from generating revenue in excess of their costs. Thus some airports—Cleveland, Charlotte, and Fort Lauderdale-Hollywood—asserted they could not charge a congestion fee high enough to encourage airlines to shift flights from the peak hours without violating this revenue cap.

In short, demand management is legal and possible to implement, yet airport sponsors can refuse to advance it as a feasible alternative by citing FAA policy and pro-build language. In contrast, RASP efforts can help circumvent policy conflicts since these are exploratory planning studies that occur outside the NEPA process. Unlike in an EIS, where the underlying mission is to build infrastructure, FAA pro-build policy does not immediately deter RASP planners from exploring alternatives to new runways.

The link between airports and economic development in the US has roots from the 1920s. In her look at the history of US airports, Professor Janet Bednarek at the University of Dayton writes that “a city had to have [an airport] in order to achieve its ‘destined’ growth and development to match or, better, overwhelm its urban rivals.” Such urban competition remains today, as seen by airport EIS documents that argue in favor of airport expansion to preserve the city’s hub status.

Across all reviewed airport EIS documents, the most frequently cited reason for increasing capacity was to enhance the airport’s ability to accommodate flights and, in some cases, remain a hub airport. The sponsors of eleven hub airports (three of which are no longer hubs as of 2015) explicitly cited a desire to protect the hub operation of their primary airline. Eight airports considered demand management but cited their hub status as a reason not to advance it as a feasible alternative. There is limited research on whether expanding capacity helps airports maintain their hub status, or on whether the environmental impacts of constructing a larger airport are offset by the promise of business growth. Therefore, the tradeoffs between increasing capacity and managing demand remain unknown.

With some creative thinking, airport planners could create a regional planning process that improves the value of EISs, inspires changes to FAA policy, and explores critical alternatives to increased capacity. EIS methods in aviation planning are not set in stone; if new ideas and new people come to the table, more environmentally innovative solutions to airport congestion may arise.

This article is adapted from “Build Airport Capacity or Manage Flight Demand? How Regional Planners Can Lead American Aviation into a New Frontier of Demand Management,” originally published in the Journal of the American Planning Association.

Megan S. Ryerson is Assistant Professor in the Departments of City and Regional Planning and Electrical and Systems Engineering at University of Pennsylvania (mryerson@design.upenn.edu).

Amber Woodburn is a Doctoral Candidate in the Department of City and Regional Planning at University of Pennsylvania (amwo@design.upenn.edu).