Electric two-wheelers have transformed the way people move in most Chinese cities. In just ten years, growth in electric two-wheelers—a category that includes vehicles ranging from electric bicycles to electric motorcycles—has substantially increased the total number of vehicles in China. Electric bike sales began modestly in the 1990s and started to take off in 2004, when 40,000 were sold. Since then, over 100 million have been sold and now more than 20 million are sold each year. Electric two wheelers, in short, represent the first mass-produced and mass-adopted alternative-fuel vehicles in the history of motorization.

For anyone interested in alternative fuel vehicles, the dramatic success of electric two-wheelers in China merits attention. How did this explosive growth occur? What have the results been? And what is the potential for electric two wheelers to spread elsewhere around the globe? In this article I examine these questions. Electric two-wheelers have filled an important and otherwise underserved niche in the China’s crowded transportation system. Electric two-wheelers can maneuver through congested streets. They can be charged from traditional wall outlets and often have a removable battery, allowing them to be charged indoors. And they have some of the lowest emissions of any type of motorized transportation. For residents of dense Chinese cities, electric two-wheelers provide a high level of door-to-door mobility at low cost.

Electric two-wheelers have filled an important and otherwise underserved niche in the China’s crowded transportation system. 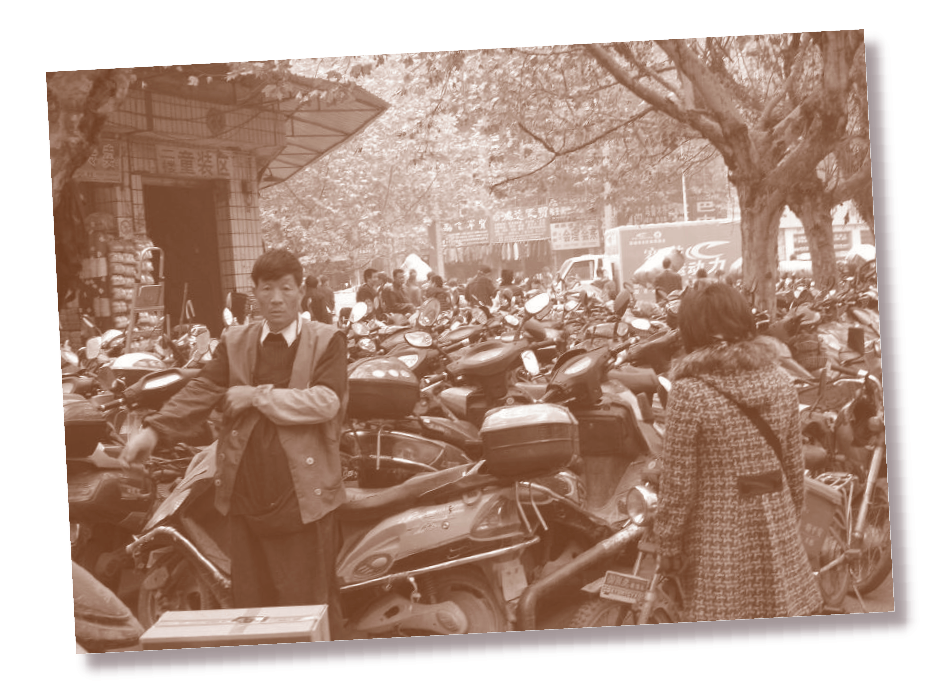 But two-wheelers are not without their critics. Regulations on the production and operation of two-wheelers have been in place since 1999, but these rules are only loosely followed. Two-wheelers are getting larger and faster, and as they get bigger, confusion about how to classify them increases. Are they motorcycles? Are they bikes? The increased speed and power of the two-wheelers also raises concerns about safety, and threatens to diminish some of their environmental benefits. The question of how clean two-wheelers are is also a complicated one, because while their tailpipe emissions are low, they nevertheless create emissions in the places where their electricity is generated.

Nor is it entirely clear whether two-wheelers will spread abroad. The popularity of electric two-wheelers in China owes in part to severe restrictions on some competing modes. Whether electric two wheelers would be as popular in the absence of such regulations is an open question.

The Rise of Electric Two-Wheelers

China’s electric two-wheeler growth has been spurred by two notable policies from the central government. First, in 1999, the government designated certain electric two-wheelers as bicycles. To be considered a bicycle, an electric two-wheeler was required to have a bicycle-style design with functioning pedals, weigh less than 40kg, and have a maximum speed of 20km/h. This classification meant, among other things, that qualifying electric two-wheelers could travel in the bicycle right-of-way, that they did not require licensing and registration, and that users did not need a driver’s license. These advantages made motorized travel available to many people who would otherwise be unable to use it. TK Second, many cities severely restricted the ownership and use of gasoline motorcycles in their urban cores. In a nation with crowded roads and restrictions on gasoline motorcycles, it is perhaps not surprising that a low-cost vehicle that ran on electricity and could travel in bicycle rights-of-way became popular. 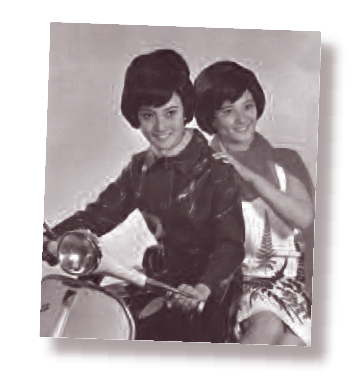 As technology evolved and demand for larger vehicles grew, producers of electric two-wheelers began to ignore the limits on vehicle speed and weight.

Higher speeds have undeniable benefits to users, but higher speeds can also have costs in the form of safety—both the safety of users and the safety of the public. Electric scooters have many of the features of traditional gasoline scooters, often including speedometers, turn signals, brake lights, disk brakes, and headlights. These features can potentially make scooters safer than bikes, but the scooters’ increased speed and weight, which increase the severity of any crash, may counteract any safety benefits from their greater visibility and stopping power. As a result, bicyclists became increasingly concerned about sharing their lanes with larger, more powerful scooters.

In response to the perception that two-wheelers had become unsafe, several cities imposed more stringent regulations, forbidding electric scooters in urban centers while gradually allowing higher speeds and weights in outlying areas. And in December 2009, the central government reiterated its commitment to the “20/40 rule” mandating that two wheelers maintain a 20km/hr speed limit and 40kg weight in order to be classified as electric bicycles. Faster and heavier vehicles can still be manufactured, but they are now classified as electric motorcycles, requiring registration and driver licensing. The classification also moves electric scooters out of the bicycle lane. However, the central government continued to allow local governments some latitude in enforcing this new regulation. Therefore, the true impact of this pronouncement may be limited. 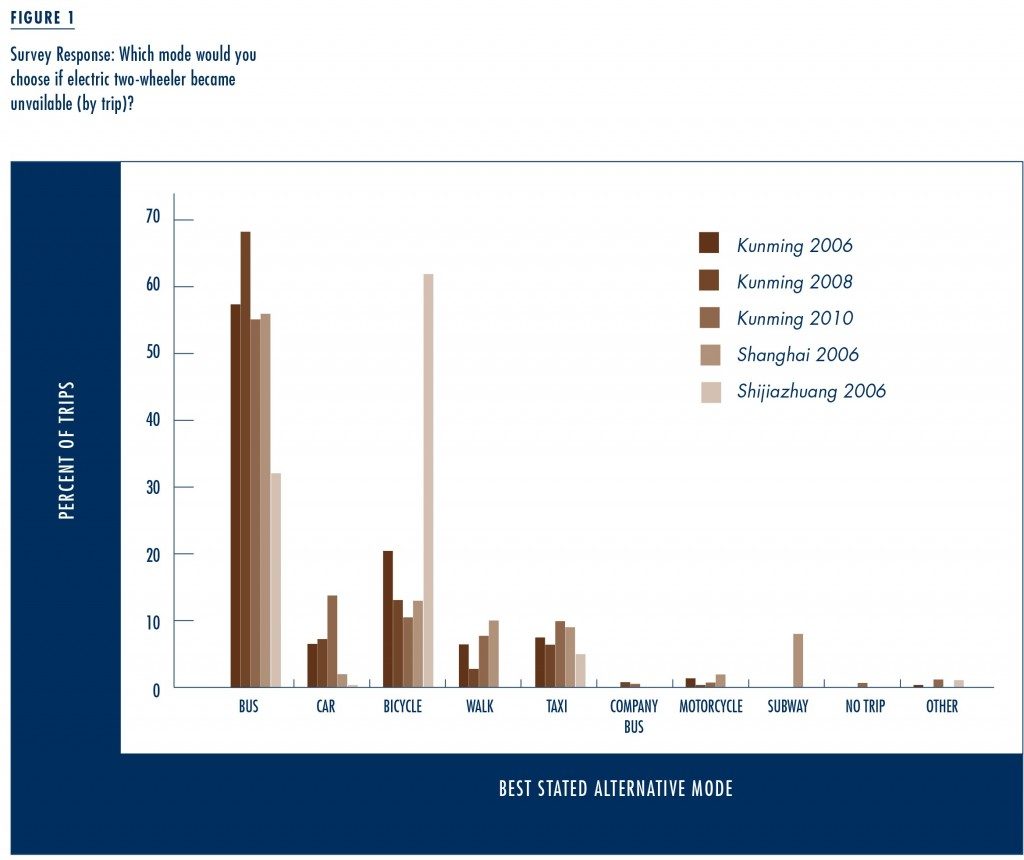 Part of the consumer appeal of electric two-wheelers is their low cost, and their cost is low in part because they are low-weight and low-power, making them among the most efficient vehicles on the road. The electricity costs of a two-wheeler are about 0.2¢ per kilometer. Battery replacement costs can be higher, about 1¢ per km, depending on battery size and fluctuations in lead prices. By way of comparison, gasoline costs for cars average 8¢ per kilometer and for motorcycles 3¢ per kilometer. The average bus trip also costs 3¢ per kilometer.

The primary factor determining the environmental impact of electric two wheelers is the method used to generate the electricity that powers them.

The low power required to operate electric two wheelers also makes them relatively clean. The primary factor determining the environmental impact of electric two wheelers is the method used to generate the electricity that powers them. Over 80 percent of China’s electricity generation relies on fossil fuels, mostly coal. However, different regions rely on fossil fuels to different degrees, so the location of a two-wheeler can significantly influence its environmental impact. 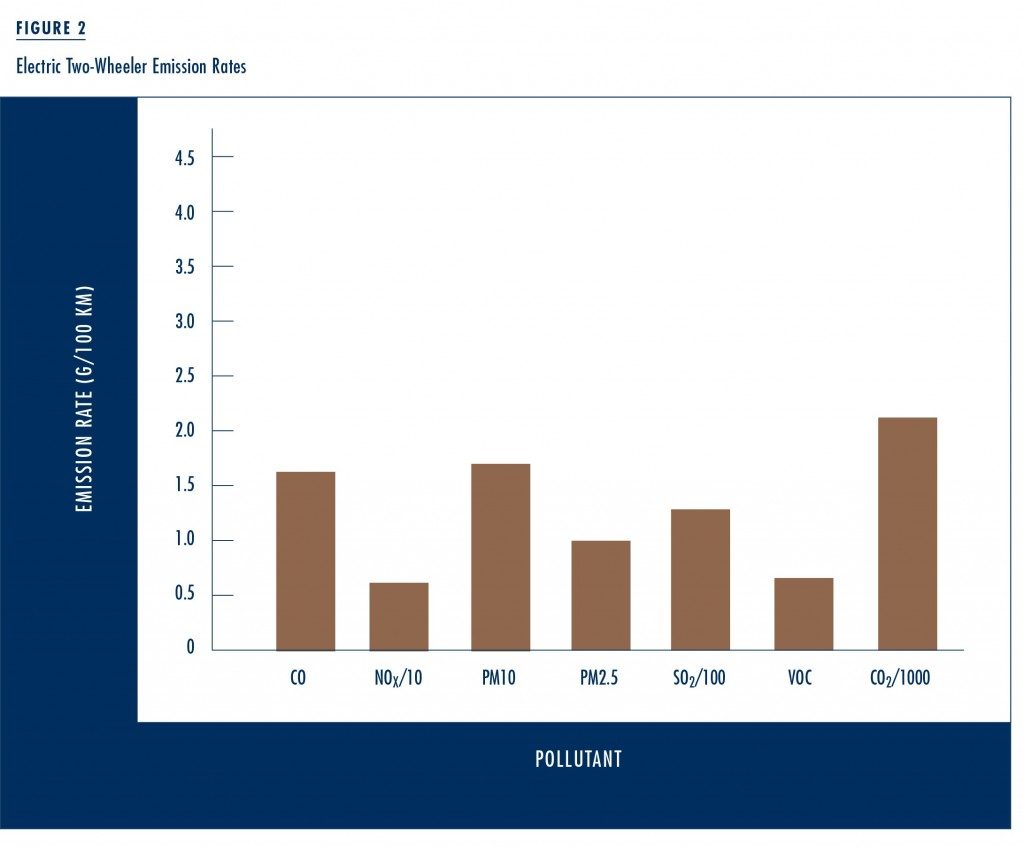 Figure 2 shows average emission rates (weighted by total electricity generated in the region) of several pollutants from electric two-wheelers. In general, the provinces with the fewest emissions are in the southwest, which has cleaner hydropower sources of electricity, while the provinces with the highest emissions are in the northeast, where virtually all electricity is generated with coal (Figure 3). 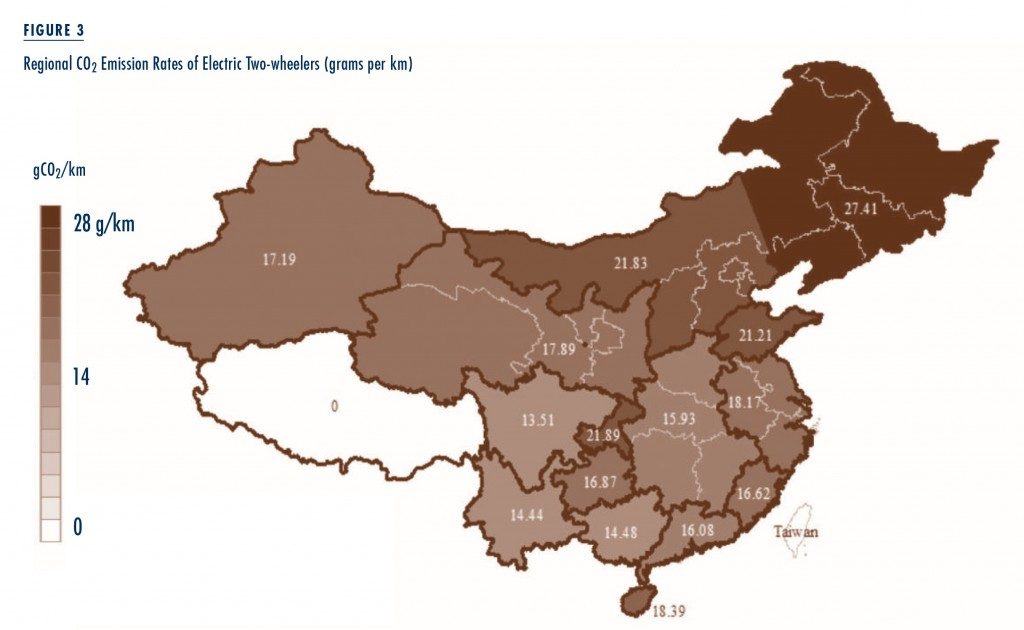 Two-wheelers’ low emissions, however, are partly countered by their growing use of lead batteries. Over 90 percent of electric bikes in China use a lead battery, and each battery typically contains 10 to 20 kg of lead. Some of the largest electric scooters use even heavier batteries. Mining, producing and even recycling lead batteries can generate substantial pollution. While it is true that almost all motorized vehicles use lead acid batteries, none use them at the rate electric bikes do. Each electric bike requires a replacement battery every twelve to eighteen months, resulting in a tremendous amount of lead released to the environment. Moreover, battery recycling in China is poorly regulated, and generally only captures 70 to 80 percent of the used lead. This low recapture rate is largely due to a burgeoning industry of small, informal recyclers and manufacturers, whose existence is fueled by the popularity of two-wheelers. The high rates of lead emissions not only undermine the environmental advantages of two-wheelers, but also pose health threats to people who live near lead production and recycling facilities. In the past year, a number of high-profile lead poisoning cases have been reported around lead and battery manufacturing facilities throughout China.

Battery recycling in China is poorly regulated, and generally only captures 70 to 80 percent of the used lead.

Nevertheless, electric two-wheelers have some clear environmental advantages when compared to competing motorized modes. Table 1 shows the average emission rates, including vehicle and fuel production emissions, of several vehicles that electric two-wheelers compete with for mode-share. Even compared to a loaded bus (the vehicle most two-wheeler operators would otherwise be using), electric two-wheelers emit less carbon dioxide (CO2), carbon monoxide (CO), and nitrogen oxides (NOX). However, they emit more particulate matter (PM), sulfur dioxide (SO2) and hydrocarbons (HC) than buses, because they draw power from China’s coal-based power grid. (And again, because different regions depend more or less heavily on coal, these comparisons can vary by region). 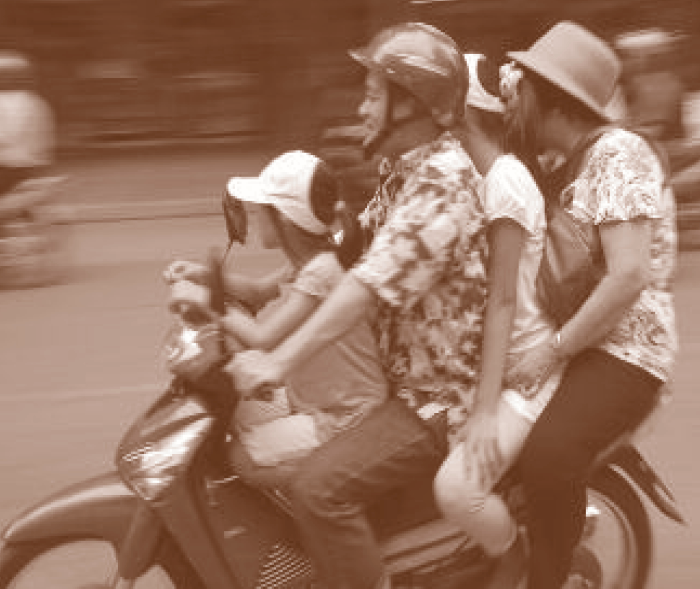 Local emissions, however, don’t tell the whole story. Electric two-wheelers are charged from the grid, so they contribute to pollution from power plants. Most pollutants from tailpipes are emitted in urban areas, and generally inhaled by the urban population. But power plants are frequently in rural areas, and their pollutants might be inhaled primarily by rural residents who live nearby, and who are not responsible for the bulk of the emissions. Thus while electric vehicle emissions and exposure could be lower overall, a large shift to electric vehicles could also shift urban transportation pollution onto rural populations.

Looking Beyond China: A Global Future for Electric Two-Wheelers?

Electric two-wheelers in China compete mostly against buses or bicycles.

Absent such interventions, however, it is unclear how popular electric two-wheelers will be outside the unique circumstances of congestion and regulation that characterize Chinese cities. Some electric two-wheelers—primarily electric-assist bicycles with advanced battery technology and performance—are becoming popular in some European and North American cities. These vehicles are designed to travel longer distances and at higher speeds. As a result, they tend to be larger than traditional bicycles, which raises significant questions about their role and place in the transportation system. Nevertheless, electric two-wheelers in Western countries could help overcome many of the challenges associated with traditional bicycles by increasing their range, making difficult terrain more manageable, and reducing rider fatigue. But Western nations, like China, will need to devise and enforce rules defining how two-wheelers can safely travel.

The two-wheelers provide a tremendous amount of low-cost mobility, no tailpipe emissions, some of the lowest overall emissions of any motorized mode, and almost no noise.

Yet China’s experience also shows us the complications that can arise when another set of users is mixed into an already-crowded road system. In response to concerns about safety, the Chinese government has had to reinforce its distinctions between bikes, electric bikes and scooters, and Western countries will also require unique policies to classify electric two-wheelers and integrate them into the existing transportation system. Whether electric two-wheelers will be able to compete in the open market against gasoline two-wheelers also remains uncertain.

Christopher Cherry is Assistant Professor of Civil and Environmental Engineering at the University of Tennessee, Knoxville (cherry@utk.edu).