Being hit by an SUV instead of a mid-sized sedan increases your risk of death by over 50%.

Buying a car can be a stressful process, requiring choices based on quality, fit, and cost. When making this choice, we focus mainly on our own well-being and often ignore the negative effects our purchases may have on others. This illustrates the problem of externalities—public costs and benefits not reflected in the cost of a private choice. Classic examples of externalities include air pollution and traffic congestion. In our study, we focus on the externality imposed by the weight of a vehicle. If you drive a heavier car and collide with a lighter vehicle, the occupants of the vehicle you hit are more likely to be injured or killed. The occupants of the struck vehicle thus bear an external cost of your heavier vehicle.

If you drive a heavier car and collide with a lighter vehicle, the occupants of the vehicle you hit are more likely to be injured or killed.

Many consumers like bigger vehicles because they provide more space and are perceived to be safer in crashes. These heavier vehicles are generally less fuel efficient and are therefore both costlier to operate and more harmful to the environment. Some studies argue that fuel-economy standards encourage people to purchase lighter and potentially less safe vehicles, resulting in an increase in traffic fatalities. We show that these studies ignore the external safety costs imposed by heavier vehicles.

When you buy a car, you choose the amount of protection by selecting a vehicle of a given size and weight. You internalize the higher purchase price and higher operating costs of a heavier vehicle in order to obtain safety benefits. At the same time, your choice imposes a cost on all drivers sharing the road with you, since heavier vehicles are more dangerous to other roadway users. Ideally, your choice of vehicle would reflect these significant external costs, but currently there is little or no incentive for you to consider them. The safety benefits of your heavy vehicle thus come at the cost of greater risk to other roadway users. This causes consumers to overinvest in vehicle weight, which has costs in terms of fuel economy and manufacturing expense.

Our research quantifies the external costs of choosing heavier vehicles. These external costs are an important policy topic: traffic accidents claim about the same number of life-years lost in the United States to lung cancer. Under current laws, consumers have the right to shift risk to others with little recourse for compensation. We do not evaluate the ethics of risk shifting; rather we quantify whether it produces inefficient outcomes. We conclude by discussing several potential policies for regulating these external costs in order to increase social welfare. 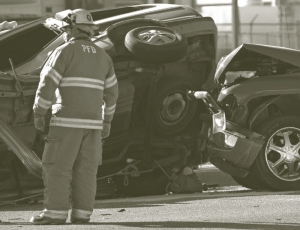 The Relationship between Vehicle Weight and Fatalities

Police departments across the country record a tremendous amount of information on reported accidents. We obtained permission from eight state police chiefs to examine over ten million state accident reports between 1989 and 2008. While police officers do not weigh vehicles at the scene of an accident, they often record the Vehicle Identification Number (VIN). This number allows us to determine the weight of each vehicle involved in a crash. We are also able to observe whether anyone in a given vehicle was severely injured or killed in the accident, along with a rich data set of driver, vehicle, and accident characteristics. We use regression models to estimate the probability of a fatality or serious injury in the struck vehicle as a function of the weights of both the striking and struck vehicles, driver characteristics, accident characteristics, and other vehicle attributes.

Our model indicates that when the striking vehicle is 1,000 pounds heavier than a baseline vehicle, the probability of a fatality in the struck vehicle increases by 40 to 50 percent. Additionally, the probability of a serious injury in the struck vehicle increases by 17 to 20 percent. This effect is both economically and statistically significant. While 1,000 pounds may sound like a lot, it is not. In fact, it is equivalent to the weight gain of the Honda Civic between 1981 and today, and close to the average US light-vehicle fleet weight gain since the early 1980s.

We estimate that the private safety benefit of driving a heavier striking vehicle is roughly equivalent in magnitude to the external cost estimates above. In other words, adding weight to vehicles is a “zero sum game” from a safety perspective. Every pound in a heavy vehicle that brings extra safety for the driver comes at the cost of a roughly equivalent reduction in safety for those in lighter vehicles. Furthermore, our data show that collisions between two heavy vehicles are not, on average, safer than collisions between two light vehicles.

Every pound in a heavy vehicle that brings extra safety for the driver comes at the cost of a roughly equivalent reduction in safety for those in lighter vehicles.

We conducted a number of sensitivity checks to see whether our estimates might have been biased. One potential bias is that heavier vehicles may be concentrated in rural areas with longer distances to hospitals, which increases the time to receive critical medical care. To make sure our regressions did not wrongly attribute this distance-to-hospital effect to vehicle weight, we controlled for crash location and found no evidence supporting the rural hypothesis.

A second potential bias is that more aggressive drivers may select heavier cars to drive. We tested for this bias using single-car accidents from our dataset and National Highway Traffic Safety Administration crash test results, but found no supporting evidence.

How Big Are These External Costs?

We calculate that excess vehicle weight imposes an external safety cost on other drivers of $79 billion per year. Our data allow us to estimate causal effects of vehicle weight on accident fatalities and then convert them into annual dollar figures. To do this, we assume that the lightest car that provides basic transportation services weighs 1,850 pounds, which is roughly the weight of a Toyota iQ subcompact hatchback. We then take the weight of the average vehicle sold in the most recent year of our sample and calculate the increase in external fatalities due to vehicle weight (relative to the 1,850 pound benchmark vehicle). When we multiply these additional fatalities by the value of a statistical life ($5.8 million in 2008), we arrive at an external cost to other drivers of $79 billion per year. Once we account for fatalities of bicyclists, motorcycle riders, pedestrians, and collisions involving more than two vehicles, we arrive at a total external cost of vehicle weight of $136 billion dollars per year (or an average of $586 per vehicle per year). This represents the additional external costs that consumers do not consider when purchasing their vehicles, and is a guide for the size of the appropriate corrective tax or fee. For comparison, this number is $12 billion more than the estimated social cost of total US carbon emissions.

Excess vehicle weight imposes an external safety cost on other drivers of $79 billion per year.

If we divide the total external safety cost of vehicle weight by the number of gallons of gasoline consumed in the US annually, we arrive at an external cost of 97 cents per gallon. Thus, per gallon, the external cost of vehicle weight is larger than the estimated external costs of air pollution (21 cents per gallon) and congestion (29 cents per gallon). This estimate does not even incorporate the fact that heavier vehicles may be more likely to crash due to longer braking distances and poorer maneuverability. Furthermore, 97 cents does not include the additional likelihood of a fatality if the striking vehicle is an SUV or light truck. A back-of-the-envelope calculation suggests that incorporating these costs could raise the total external cost to be as high as $1.89 per gallon of gasoline.

How Can We Regulate?

These results suggest that, if heavier vehicles impose safety externalities on other vehicles, governing bodies should regulate vehicle weight. There are several policy options that could achieve this goal. The first is the economist’s least favored approach: a Corporate Average Fuel Economy standard. This regulation, which has been in effect in the US since the 1980s, reduces vehicle weight indirectly by prescribing higher fuel efficiency, but it does not regulate the problem directly. While these regulations limit consumers’ vehicle choices, they do not involve an explicit tax. A more efficient strategy would be to charge an excise tax linked to weight, but this would likely be politically unpopular.

Another way to control vehicle weight, which economists prefer, would be to pass the external safety cost on to consumers in the form of a gasoline tax. Higher gasoline prices encourage consumers to choose more fuel-efficient vehicles, which are lighter by design. Figure 1 displays the relationship between fuel economy and curb weight for model year 2005 vehicles. While the correlation between fuel economy and weight is strong, it is not perfect, so a gas tax does not price additional weight in an exact manner. 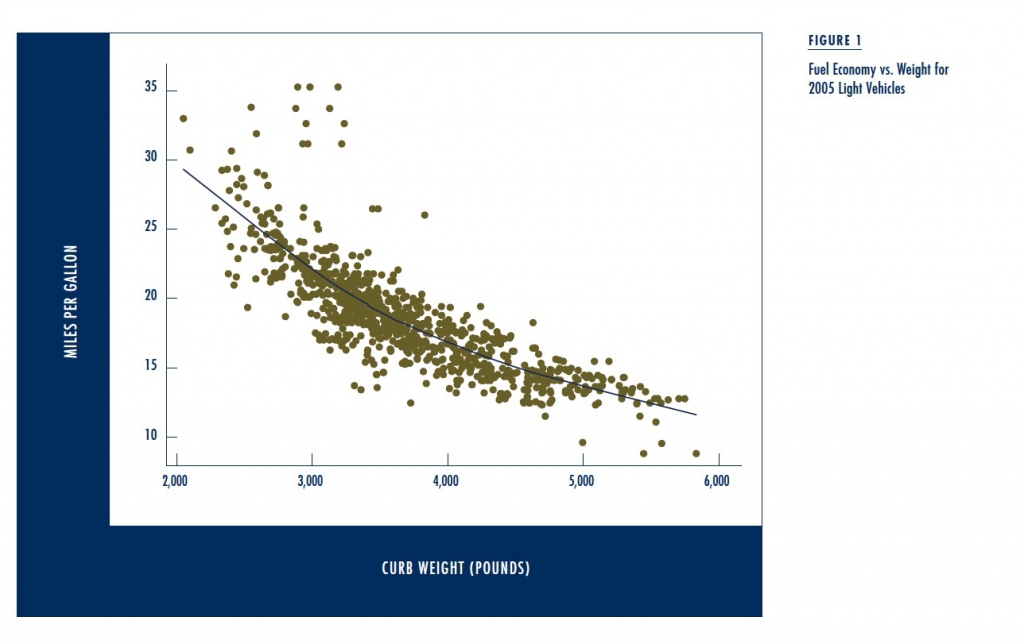 The optimal regulation would be similar to a pay-as-you-drive (PAYD) scheme, where drivers pay a per-mile fee proportional to vehicle weight. In this scheme, heavier cars  would pay a higher per-mile fee than lighter cars, and people who drive more would bear more of the costs associated with the risks they impose. An attractive feature of this policy is that the tax would also vary with driver behavior; since the insurance rates are higher for risky drivers, they would face a higher weight tax than safe drivers. This is desirable because the weight externality is ultimately proportional to the number of accidents drivers have rather than the number of miles they drive. While this policy is economically preferable, it currently imposes logistical challenges.

A gas tax, however, is a reasonable proxy for the optimal PAYD scheme. For 96 percent of vehicle models, the difference between the two fees is less than two cents per mile. Thus, a gas tax is very close to the optimal mileage fee that is proportional to vehicle weight. For reference, a consumer who chooses a mid-size SUV over a mid-size sedan might expect to pay approximately $200 more over the course of a year.

So should we regulate vehicle weight? We say yes. From an economist’s perspective, an externality should be corrected by a tax that enhances social welfare. To understand why the current vehicle fleet is inefficiently heavy, consider a situation in which a tax uniformly reduces fleet curb weight by 1,000 pounds. Our research suggests that this weight loss will not increase the number of fatalities or serious injuries. We can thus achieve a lighter fleet that costs less to operate and causes less damage to the environment without compromising safety. This solution is similar to that of nuclear disarmament. If both sides cut their arsenals uniformly, the probability of a conflict is likely to remain unchanged and both sides save money on weapons expenditures. Policies to diminish our own highway arms race can improve welfare while keeping us safe.

This research was funded by the University of California Energy Institute and the Robert Wood Johnson Foundation.  The article is adapted from “Pounds That Kill: The External Costs of Vehicle Weight,” originally published in the Review of Economic Studies.

Michael L. Anderson is Associate Professor at the University of California, Berkeley (mlanderson@berkeley.edu).

Maximilian Auffhammer is Associate Professor at the University of California Berkeley, the George Pardee Jr. Chair in Sustainable International Development, and the Director of International Area Studies (auffhammer@berkeley.edu).