Halting road construction may not be the best way to assuage environmental concerns.

Mark Hansen’s 1995 ACCESS article presented compelling evidence on induced travel demand. Titled “Do New Highways Generate Traffic?” it drew on eighteen years’ worth of data for fourteen California metropolitan areas and concluded that added road capacity unleashes new travel. The article showed that added trips quickly fill up an improved roadway, bringing it back to its original congested condition. On average, Hansen found, every ten percent increase in road capacity spurred a nine percent increase in traffic volumes within three or four years. That is, around nine-tenths of added road capacity was absorbed by new trips.

Hansen’s study made an immediate splash. Environmentalists and anti-highway groups used it as evidence that building roads provides only ephemeral congestion relief. Other studies soon followed that largely supported Hansen’s numbers. Quickly, clichés like “you can’t pave your way out of traffic congestion” and “build it and they will come” were leveled against any and all road proposals. In the San Francisco Bay Area, a lawsuit filed by environmentalists held up the region’s five-year Transportation Improvement Program, arguing that it failed to account for induced demand. Untold numbers of other road projects nationwide have been delayed as disputes over claims of induced demand are mediated through the environmental impact review process.

Many induced-demand studies have suffered from methodological problems that, I believe, have distorted their findings. I review two here. The first pertains to causality: Are rising traffic volumes caused by more road capacity? Or, might added road capacity be even more strongly caused by historical growth in traffic? Most studies have dealt inadequately with the two-way relationship between road supply and demand. The second methodological issue concerns attribution: Have past methods properly specified the chain of events between added road capacity and traffic growth? I contend that most have not and that they have typically overstated induced-demand effects. I recently headed a research project that tried to overcome past methodological problems. The results, I believe, more accurately gauge the magnitude of induced demand in California.

supply and demand are continuously shaping each other, seeking market equilibrium. Yet very few induced-demand studies have tried to express traffic levels as products of this jointly dependent, two-way relationship.

A recent study at the Urban Transportation Center of the University of Illinois Chicago campus highlighted this causality issue. Using sixty years of data, the study showed that highway investments in metropolitan Chicago could be better explained by population growth rates a decade earlier than vice-versa. For both the Tri-State Tollway (I-294) and East-West Tollway (I-88), the study found that “major population gains occurred in proximity to the expressways over a decade before the construction of the respective expressways.” The high correlation between road supply and demand in these two corridors, it was suggested, was more a product of supply chasing demand than demand chasing supply.

The Chicago experiences point to an “induced investment” effect. The transportation planning and capital programming processes are designed to forecast, anticipate, and respond to growing traffic. Thus, the correlation between road supply and traffic could reveal nothing more than that these processes are working well. One might just as well argue that the positive association between highway demand and supply is a reflection of good planning.

Most induced-demand studies have been based on a single mathematical equation that predicts travel (usually expressed as vehicle miles traveled, or VMT) as a function of capacity (usually expressed as lane miles). That is, the demand curve alone is estimated. Nothing is said about the supply curve. Failure to account for the co-dependent relationship between supply and demand produces what economists call “simultaneous equation bias.” This means the calculations that tell us the importance of road investments on travel are thrown off. 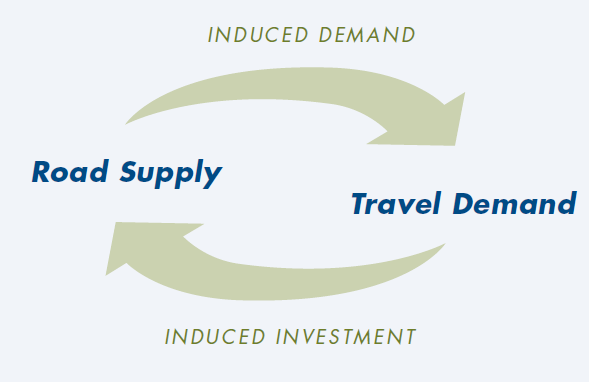 Mark Hansen and I recently tried to redress this problem by estimating how, over time, road investments and demand jointly influence each other. Specifically, we simultaneously estimated induced demand and induced investment (Figure 1). Similar to the earlier Hansen study, we pooled supply-demand data over a twenty-year period for 34 California counties. Like most previous studies, ours used county-level data, because highway improvements reverberate throughout a network, adding traffic to feeder roads. Examining trends on a specific highway stretch does not capture this, but studying a larger geographic area, like a county, can. The downside is that the resolution of analysis becomes coarse and thus statistically less rich.

These results suggested that induced demand is alive and well in California, even when accounting for the joint, two-way relationship between road investments and travel. So is induced investment. Hansen’s earlier findings, as well as successor studies, appear to be pretty much on the mark.

I was not convinced that this recent Cervero-Hansen study told the whole story, however. Using county-level data to study travel on individual roads did not seem right. More appropriate units are transport corridors. Equally troubling was the incomplete nature of the analysis—both ours and those of virtually all prior studies. Road investments by themselves do not increase volumes. Only by conferring a benefit, like faster speeds, will traffic increase. Adding a twelve-foot lane along a congested urban corridor matters; adding one in a lightly trafficked exurban stretch does not. 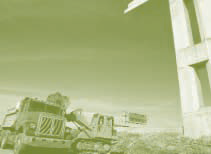 We need to determine how lane-mile additions affect speeds and how speeds, in turn, influence demand. We will then see that traffic growth is tied to a benefit (as opposed to an innate or inane factor like new asphalt).

Past studies have also failed to expose the effects of road expansion on land development. Their focus instead has been on changes in travel behavior soon after a road is improved. Some who previously did not travel because of traffic tie-ups now drive—the “latent demand.” Others switch routes. Why keep traveling on a parallel roadway when the newly expanded, once-congested freeway is now free-flowing? Still others switch mode. For example, trips once made by vanpool (e.g., to use a carpool lane) are now taken alone. Trips people once took just before or after the peak are now made in the heart of the peak. And some people will opt for longer trips—replacing the two-mile hop to the pricey neighborhood convenience store with a ten-mile jaunt to WalMart—now that traffic’s flowing smoothly. 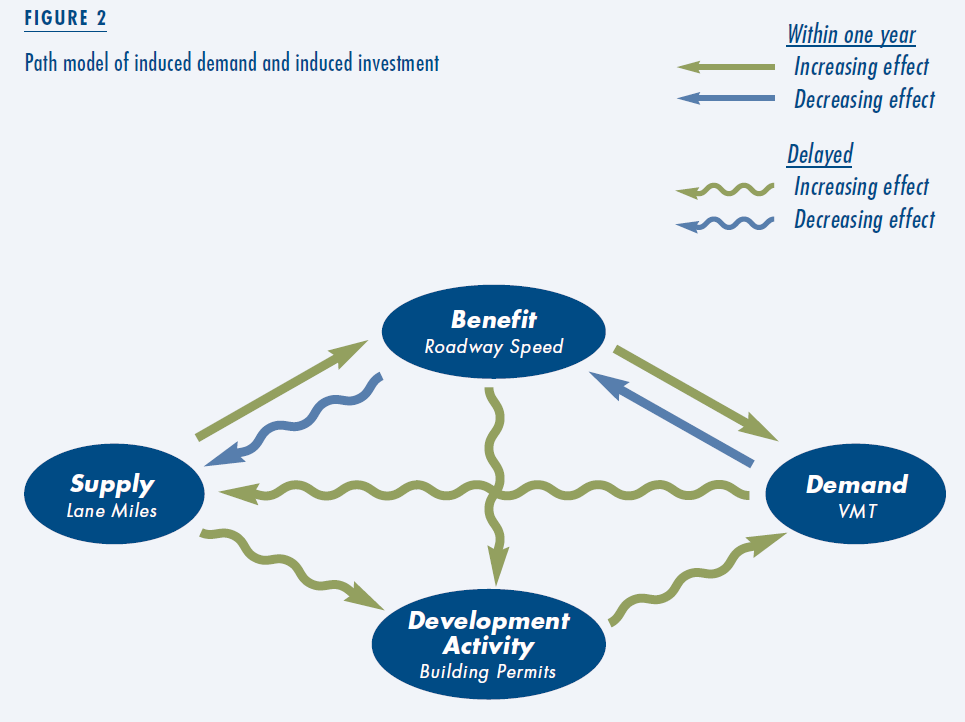 But over the longer run, behavioral shifts are only part of the story. Real-estate developers know they can make handsome profits building along

improved highways. Within a few years of a roadway’s opening, fast-food restaurants and gasoline stations pop up near interchanges; office parks and shopping centers open nearby; and new residential subdivisions break ground still farther out. Since such activities add traffic, they should also be part of the induced demand equation.

To account for these factors, I recently completed a follow-up study that applied the technique of Path Analysis—a systematic approach that traces the chain of events between an intervention (e.g., road expansion) and outcome (e.g., increased traffic) over a number of years. Using data on VMT, lane miles, and other variables for 24 freeway-expansion projects in California between 1980 and 1994, I estimated both induced demand effects and induced investment effects. Key inputs were building permits for residential, commercial, and industrial developments in four-mile buffers along improved freeway stretches. This allowed accounting of 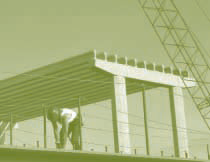 Figure 2 outlines the path logic. The effects of lane-mile additions are translated into travel speeds. Higher speeds in turn increase VMT. Handled this way, roads do not directly affect demand; rather their influences are channeled through the mediating variable: travel speeds. Short-term increases in travel (owing to behavioral shifts) can quickly erode speed gains, however. Equilibrium will eventually be reached as speeds and travel volumes adjust to each other. I estimated these simultaneously.

Over the longer run, Figure 2 shows that the combination of added capacity and higher speeds increases floor space and numbers of housing units along an improved freeway corridor. Developers often know about highway projects well before they are built, and many begin securing building permits and entitlements early on. Thus, they respond directly to the variable “lane miles” in the path analysis. Building activities also respond to performance (i.e., higher travel speeds). All else being equal, suburbanites prefer to live near fast-moving corridors than snarled ones. 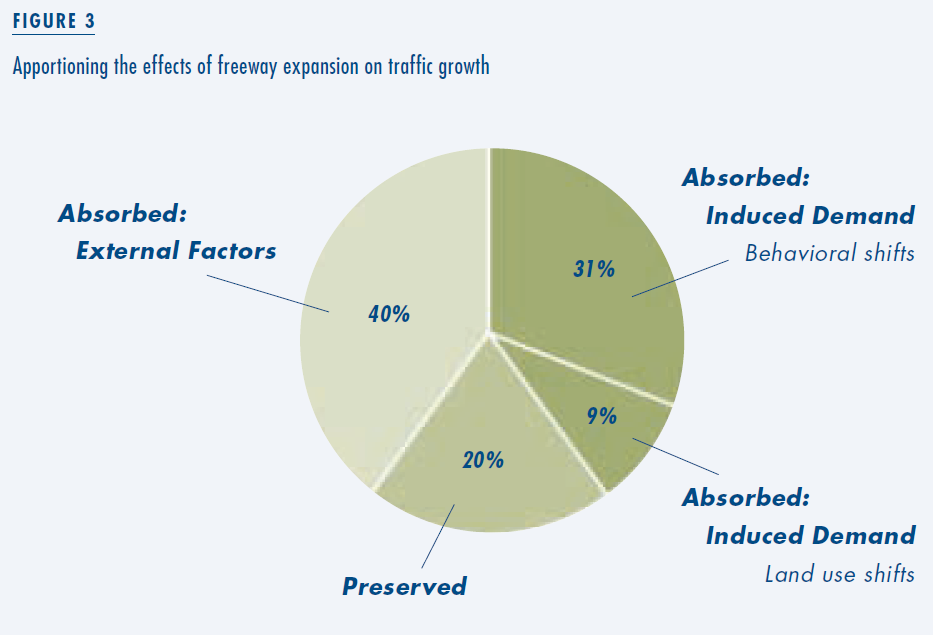 Figure 2 also accounts for induced investment (the long arrow going from right to left). By studying the chain of events over an eighteen-year time period, I was able to capture the influences of VMT growth on road investments.

The path analysis showed that for every 100 percent increase in capacity there’d be an eighty percent increase in travel, reflecting increased travel speeds and land use shifts along improved corridors. However, only around half the increases in speed and growth in building permits was due to the added capacity. Factors like employment and income growth accounted for the other half. Accordingly, the traffic gains that one can attribute to the added capacity is actually around half of eighty percent, or forty percent. This is substantially less than reported by past induced-demand studies.

This method also yields useful policy information. By tracing chains of events, one can apportion the share of induced travel due to short-term speed increases and long- term land use shifts. Figure 3 shows that over a six- to eight-year period following freeway expansion, around twenty percent of added capacity is “preserved,” and around eighty percent gets absorbed or depleted. Half of this absorption is due to external factors, like growing population and income. The other half is due to induced-demand effects, mostly higher speeds but also increased building activities. These represent California experiences from 1980 to 1994. Whether they hold true elsewhere is of course unknown. We need more studies adopting a similar path-analysis framework carried out in other areas if we’re to generalize about forces shaping induced travel demand in contemporary  America.

There’s still a lot we don’t know about the induced-demand phenomena, although recent research has filled some knowledge gaps. Nonetheless, highway critics have taken fairly firm positions on the issue, using past research to shoot down any and all road proposals. To the degree past studies have been problematic, so has policy advice.

Over the last several decades and in many corners of America, claims of induced demand have stopped highway projects in their tracks. This is wrong-headed. Highway investment decisions should be based on a full accounting of costs and benefits over the service life of a facility. Induced-demand studies have told us only that some benefits of new or expanded highways get eroded over time. This is important to know, for it gives us a handle on the numerator of the benefit/cost ratio. However, induced-demand studies say nothing about other benefits conferred by highways—e.g. increased economic productivity or satisfaction of one’s preference for suburban living. 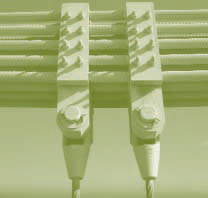 It is exactly because induced demand erodes travel-time savings that we need better research into travel-demand forecasting. Today’s large-scale forecasting methods give little, if any, attention to induced demand. They typically ignore induced investment altogether. Yet, every year, billions of dollars in proposed highway projects rest on these models’ outputs. Until we get a better handle on induced demand, the validity of forecasts will always be in question.

Although I personally sympathize with the aims of many environmentalists, fighting highway projects, regardless what benefit-cost numbers say, is misguided. The problems people associate with roads—e.g., congestion and air pollution—are not the fault of road investments per se. These problems stem from the use and mispricing of roads, new and old alike. They also stem from the absence of careful land use planning and management around new interchanges and along newly expanded highways. Better road pricing and land use planning are more likely to achieve the aims of environmentalists than carte blanche bans on any and all road construction.

Robert Noland and Lewison Lem, “A Review of the Evidence for Induced Travel and Changes in Transportation and Environmental Policy in the U.S. and the U.K.,”