Ports have to understand how corporations needs’ vary to better serve their markets.

Ever wonder how new cars get from assembly lines to dealers? Especially those imported cars that have been selling so well in the US? From factory to salesroom, automobiles follow a closely choreographed distribution channel. You’ve seen car-carrier trucks on the highway and perhaps even specialized rail cars or square-sided ships designed to carry automobiles. Less visible though are the underlying corporate 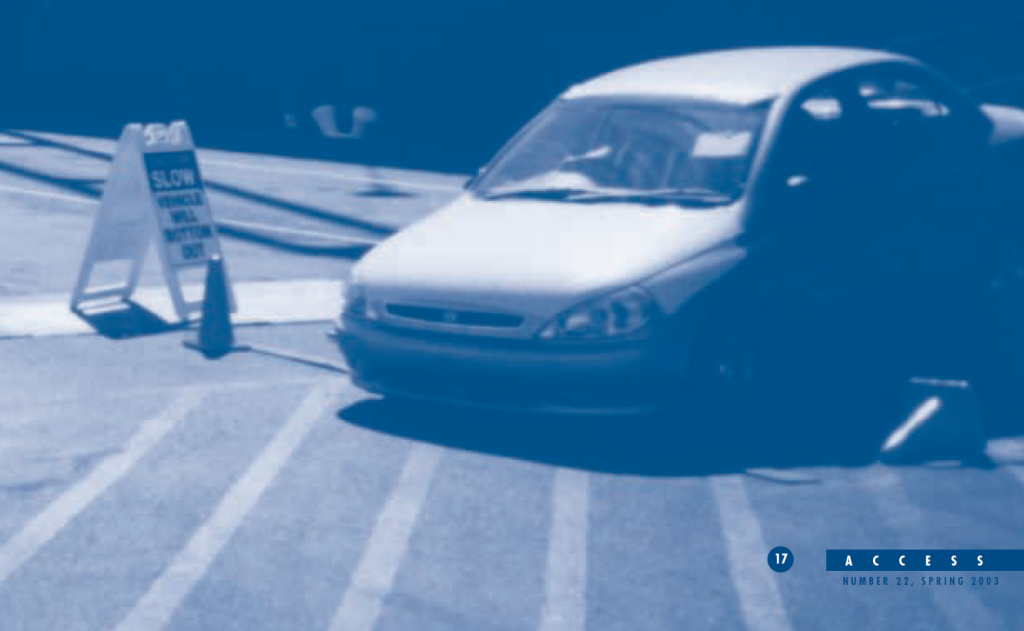 These differences are crucial for port authorities and transportation agencies who work with or alongside these firms. A company’s logistics system—the way it moves supplies and delivers its product to market—does not simply link factories and salesrooms. It is an integral component of the entire business, reflecting long-established strategic decisions and corporate cultures. An efficient logistics system for one business model may not work well for another.

The differences between the firms are immediately apparent at the nation’s seaports. Importers like Toyota employ a dock-based approach. They use port facilities to receive vehicles from abroad, store them, conduct post-production quality controls, and customize them. They may also 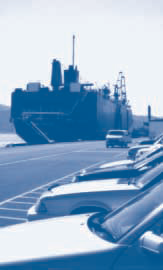 combine loads of imports at the docks with models assembled in North America before redistributing these to dealers for final sale. In contrast, for a dealer-based importer such as Honda, seaports are simply intermodal transfer points to be passed through as quickly as possible.

Variable approaches to port usage present both opportunities and challenges. Every day, thousands of new cars, pickups, SUVs, and minivans are driven off ships at US seaports enroute to dealers across the continent. According to Maritime Administration statistics, automobiles accounted for about one-tenth of the $670 billion in imports and exports handled at US ports in 1999, while providing many jobs in the port economy. Since 1984, East Asian and European automobile manufacturers have opened assembly plants in numerous North American locations, reducing the overall volume of new imports from a high of over 4 million automobiles and light trucks in 1986 to a low of 1.7 million in 1996. However, the number of imports was just over 3 million in the boom year 2001. This prosperity brings challenges, as automobile-handling facilities compete for scarce waterfront land and for access to congested highways.

When a new RAV4 or Prius rolls off the Toyota assembly line in Japan, it is not yet ready to be sold. After a sea voyage of up to several weeks, it arrives at one of Toyota’s five US ports of entry. Here it is cleared through customs, cleaned, and, depending on the most recent market trends, customized and fitted with a variety of accessories. It is also joined by Camrys assembled in Kentucky or Ontario and Tacoma trucks built in Fremont. Mixing loads to meet regional preferences, workers then dispatch the imported and domestically assembled vehicles to dealers around the region.

The dock-based approach makes the port facility a key node in the overall production and distribution network. The dock becomes an extension of the factory, with a substantial degree of independence. In Toyota’s case, this reflects both the company’s internal structure and its overall production strategy. In the 1960s and 1970s, Toyota established a system of multistate regional distributors in the United States that were responsible for arranging port operations and servicing regional dealers. Eight seaports, including the container hub ports of Long Beach and New York, served two company-owned and eight independent regional distributorships.

When Toyota first entered the US market, its imports were low-cost, large-volume models. With low profit margins and the added disadvantage of delay from a long sea voyage, it risked making vehicles that could not be sold profitably. So Toyota created a business model that relies on lowering costs to maintain profitability. By working closely with its suppliers and using just-in-time production techniques, Toyota could be more flexible than the major American automobile firms, while producing at relatively large volumes. The independent regional distributors helped increase the firm’s flexibility. They would take standard vehicles and experiment with different accessories to meet specific regional tastes, such as adding air conditioners to vehicles sold in southern states. In this way they helped Toyota more closely match supply and demand.

Despite advances in market forecasting and production planning, this problem of matching supply and demand has not vanished. Hence Toyota’s port facilities continue to act as storage, accessorization, and customization facilities serving what are now integrated regional distributorships. Since the mid-1980s, the number of Toyota imports has halved, but the imported range has become both more valuable and more diverse. Today, the large-volume models tend to be assembled in North America, while higher-cost and lower-volume vehicles, including those in the Lexus luxury range, are imported.

In contrast, Honda uses a dealer-based model, which means that port operation is no more than a link in the firm’s overall distribution chain. Like Toyota, Honda sells a combination of Japanese- and North American-assembled vehicles. However, shipments of imported CR-Vs and Preludes are not combined at the port of entry with Accords, Civics, and Odysseys from Ohio, Ontario, and Alabama. Instead, the automobiles 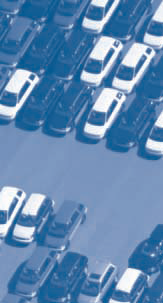 are shipped directly to dealers from wherever they are assembled. Honda’s dealerships form a decentralized network with substantial independence. Vehicle accessorization and customization, such as they exist, happen at the dealerships.

Honda’s overall production strategy accounts for its approach to port usage. Honda continually redesigns and rapidly reorganizes its assembly lines for new products. Flexibility in design and assembly at the plant allows the manufacturer to bring new vehicle models into production very quickly; these capacities, more than scale economies, make it profitable. However, this production strategy makes sense only if the firms’ distribution system gets the product to market quickly. So Honda does final assembly at the factory and ships automobiles that are ready to be sold.

Not only does Honda use ports differently from Toyota, it uses fewer of them. In 1980 American Honda used seven ports on both coasts, but today it uses only two west coast ports: San Diego and Portland. The differences are not explained by volume alone. Honda and Nissan import approximately the same number of vehicles per year. But, like Toyota, Nissan maintains five import operations on both coasts in the context of a dock-based logistics system.

Similar variation can be found among the major European importers. Mercedes maintains facilities at three US ports—Los Angeles, Baltimore, and Brunswick GA— serving dealers across the continent. This dealer-based approach is consistent with the company’s production strategy of using one assembly site per model. Conversely, Volkswagen has adopted a dock-based approach in which it conducts post-production checks at five port facilities, including the Gulf port of Houston. It even chooses to import a substantial portion of its Mexican production by sea, and thus through its port facilities, rather than overland.

Both dock-based and dealer-based port users have certain minimum port-infrastructure requirements, which—compared to the container trade—are relatively modest. Channels for ships that carry automobiles typically need be no deeper than 35 feet, so ports that may not be able to handle container ships can manage cars. Both types of port users, of course, are concerned with reducing damage during vehicle discharges, since the smallest scratch to a new vehicle is costly.

But there the similarities end. Key differences between dock-based and dealer-based approaches concern on-dock or near-dock land requirements, surface transportation arrangements, and the nature and duration of contractual relationships between port users and port authorities. Dock-based approaches, for example, require larger amounts of permanent land for storage and processing activities. This can be a problem where land is scarce and valuable. Dealer-based approaches typically require less land on a permanent basis, although they may require temporary storage space to accommodate shifting demand and supply.

Most important, the dock- and dealer-based approaches imply large differences in relationships between automobile importers and public port authorities. To secure the port facilities integral to their overall logistics system, firms using a dock-based approach will make direct, long-term commitments to port authorities. Toyota typically signs leases of up to 25 years. Like the largest container steamship lines, it has been willing to provide significant minimum annual rental guarantees. Commitments of this nature are highly desirable to port authorities, since they shift a significant portion of the risk of port development from the public to the private sector. They are also good for the overall port economy; firms using a dock-based approach are more intimately tied to the local economy, and so provide more opportunities for local employment and other economic spin-offs. On the other hand, agreements of this nature can tie up valuable port land for an extended period, precluding alternative development options.

Firms employing a dealer-based approach typically do not enter into a direct contractual arrangement with public port authorities. Instead, they make use of independent vehicle-processing firms for customs clearance, damage surveys, and other essential import-related functions. These intermediary firms are generally unwilling to enter into long-term contractual arrangements with port authorities, because their contracts with the automobile manufacturers tend to be limited. Nevertheless, independent processors aggressively compete for new contracts, and so may attract business to a port.

The Challenge to Port Authorities

It behooves public port authorities to avoid policies that dissuade current and potential users. It is clear that only some ports offer operating models compatible with both dock-based and dealer-based approaches, and we have seen selective displacement of automobile importers from some of the largest container ports. For example, whereas in 1980 eight automobile importers had significant presence in the Port of Long Beach, today only one firm uses this port. It is no accident that the remaining firm, Toyota, employs a dock-based approach, since the Port of Long Beach demands long-term commitments from its tenants.

Port authorities—and indeed other transportation agencies—need to recognize the importance of corporations’ overall strategies, as well as variations among them.

Ports such as Portland, New York, and Baltimore have achieved compatibility with several automobile importers using both dock-based and dealer-based approaches. Other, smaller ports facing an uncertain future in the container trade and seeking to diversify their commodity mix could learn from their experience. Not only do these ports have to meet the basic infrastructure requirements of the trade, they must also provide compatible institutional arrangements. For public port authorities this may mean active involvement in nontraditional port activities like training longshoremen and marketing directly to automobile importers or independent processors.

Port authorities—and indeed other transportation agencies—need to recognize the importance of corporations’ overall strategies, as well as variations among them. Anticipating, and indeed shaping, the demands of users requires consciously built relationships with the private sector. Although focus on specific firms may seem to challenge notions of detached public-sector neutrality, relations between automakers and port managers are necessarily collaborative.

Whether your new car gets its final parts at the factory or at the dock depends on whether or not the company and the port have become close partners. But then, in the end, it probably doesn’t matter which strategy is chosen. Either approach seems to work well. It all depends on each firm’s history, tradition, and culture.

Peter V. Hall, “Persistent Variation: Flexibility, Organization and Strategy in the Logistics of Importing Automobiles to the United States, 1980–1999” (forthcoming).