Observers of city life have long looked to mass transit to create urban vitality. Transit is supposed to promote a healthy high-density street life within economically vital business and retail districts, and to concentrate new developments into attractive patterns. Above all, it’s supposed to limit road congestion without resorting to ugly high-volume roads everywhere.

These goals have been frustrated by the limited ability of mass transit to attract travelers out of automobiles and by the enormous expense of building and operating mass transit. While many recently built transit systems have achieved some desirable effects, none have seriously lessened traffic congestion. Furthermore, few cities have been able to afford a system extensive enough to make more than a small change in urban form; and the share of trips by mass transit continues to fall virtually everywhere. 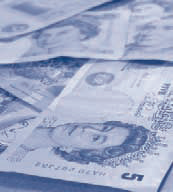 Meanwhile, other policies to control congestion have been disappointing. The only one that seems able to create dramatic improvement—road pricing—is highly unpopular. Even so, congestion has proven so intractable that pricing has begun to gain a foothold—in Singapore since 1975, in three Norwegian cities since the 1980s, on selected express lanes and bridges in California, Texas, and Florida, and on a new east-west expressway in suburban Toronto. Most dramatically, in 2003 London’s Mayor Ken Livingstone introduced road pricing to the streets of central London, in the form of a daily charge of £5 (about US$8) during business hours on weekdays.

Why has transit failed as a means to alleviate congestion, while road pricing, despite severe political liabilities, is experiencing an upswing? Ironically enough, we may have been looking at the problem backwards. Rather than mass transit being the solution to congestion, perhaps congestion pricing—a measure often viewed as an alternative to transit—could be transit’s savior.

By clearing cars off the most congested streets, pricing sets off a “virtuous circle” for mass transit, especially bus transit. Here’s how it works:

These effects can all occur quickly. Over a longer time, there may be other effects as well. By reducing parking demand, new downtown land becomes available for development, thereby increasing the economic efficiency and vitality of downtown. By making travel from a distance more expensive, nearby residential land increases in value, which encourages higher density there, making it easier to serve with high-quality transit and walking-distance retail centers. If road-pricing revenues are used to enhance downtown—arguably part of political feasibility anyhow—then even land used for downtown businesses may rise in value, especially if the “virtuous circle” significantly enhances its accessibility through better transit service. This rise in land prices creates some of the hoped-for positive effects on downtown development density.

Each of the elements in this favorable chain of events has been known in the research literature, but no one seems to have pulled them together to remark on the prospect that road pricing could give a significant shot in the arm to transit. To keep it simple, I look next at just the short-run effects—those described in the bulleted list above. Any long-run benefits are then icing on the cake.

Mayor Livingstone’s audacious policy innovation surprised everyone with its smooth implementation and quick success, cutting car traffic entering central London by 33 percent and increasing car speeds within and to the central area by 14 to 20 percent. Less well known is that Livingstone gave high priority to simultaneous improvements in public transit, especially bus transit. Clearly, it was politically savvy to connect road pricing and public transit. But my analysis suggests that more and better service was made possible, desirable, and financially viable by congestion pricing itself.

The “virtuous circle” involves a lot of interacting effects, so one might think it impossible to account for them all simultaneously. But we can 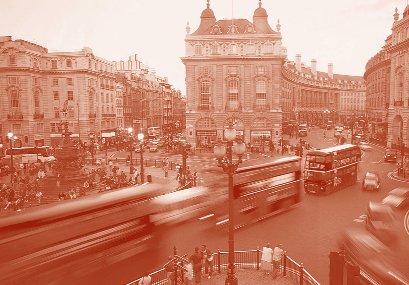 First, we know that transit users incur time costs consisting of time spent in the vehicle and time spent walking to and waiting at a bus stop. Prior research suggests that we can value their in-vehicle time at half their wage rate and their out-of-vehicle time (being more onerous due to less comfortable surroundings) at twice that amount.

Second, let’s assume that the bus operating agency reacts to increased patronage by getting larger vehicles, running more of them, or both: specifically, it tries to balance these so as to minimize agency and user costs combined. The result is a decline in average cost as patronage increases.

A third assumption is that the bus agency reacts to changes in its costs or revenues by changing its fares, so as to keep its total operating surplus or deficit the same. This assumption makes little difference to the results and is easier to describe than other options. It implies that fares are increased to cover any new service (presuming the new service loses money), but decreased to pass on any cost savings. If congestion pricing is accompanied by a subsidy increase, as it was in London, we assume this subsidy is also passed along via lower fares, after accounting for the cost of serving the additional patronage that lower fares attract.

parameters specific to the city in question. I now turn to the results of such calculations for two cases: one based on London’s experience in 2003, and the other using parameters more typical of US cities.

Central London is unusual in several respects. First, public transit has long carried a very high share of weekday trips—over 85 percent even before congestion pricing. As a result, even a big reduction in automobile traffic has only a modest direct effect on bus ridership, estimated here at just six percent for the system put in place in 2003. Second, the fraction of bus costs recovered through fares is high, about eighty percent, which means that service expansion can be carried out without adding much to London Transport’s operating deficit. Third, a large share of revenue from the London scheme was allocated to the bus agency, increasing its subsidy by an amount equal to about seven percent of the cost of providing bus transit in central London.

To depict a city more typical of the US, I also calculate a second scenario where these three features are altered: modal diversion from pricing is larger (thirty percent of initial ridership), initial cost-recovery ratio is smaller (forty percent), and there are no additional subsidies to the agency. These two scenarios are described in the “Assumptions” panel of the accompanying table. In both scenarios, I assume bus speeds rise nine percent as a result of reduced congestion, based on observations in central London after the first year of congestion pricing.

Results are dramatic. For London, bus service increases by nearly a quarter and fares are reduced by eleven percent. As a result, the initial six percent increase in transit use—which arose directly from the incentive of high prices for driving in central London—has been magnified to sixteen percent. Average user cost for a bus trip is drastically reduced, due mainly to faster travel but also to more frequent service and increased route coverage. Average agency cost per passenger declines modestly, not enough to overcome the effect of ridership increases on total expenses but enough to allow fares to decline, thanks to more passengers and new subsidies. 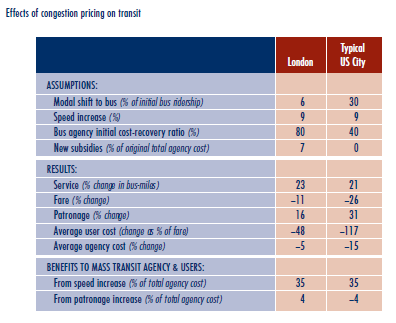 In a case more typical of a US city, the results are even larger. Ridership goes up 31 percent and average user cost falls more than 100 percent of the initial fare. Fares can be reduced 26 percent, despite a 21 percent increase in service whose fares cover less than average cost; these reduced fares are possible because of higher bus occupancy (due to patronage rising faster than vehicle-miles) and lower driver costs (due to faster trips).

What are the benefits of these changes? We see in the bottom part of the table   that total net benefits, expressed here as percent of initial agency cost, are quite high.

This does not include any benefits to automobile users, nor does it include revenues from road pricing. The bulk of the benefits shown arise from the speed increase, suggesting they would be much smaller for a rapid rail system not subject to street congestion. The benefits from the patronage increase alone are positive but small for London. They are slightly negative for the typical US case because, with higher initial subsidies, these transit trips still do not pay their social cost even though average cost per rider decreases—an indication that expansion of patronage is not necessarily a desirable goal in itself, at least within the objectives quantified by this model. Of course, if public transit provides some of the additional benefits mentioned earlier, but not counted here, the patronage increase may still be desirable.

The “virtuous circle” of cost savings and ridership increases, triggered by policies aimed at discouraging automobile travel on congested city streets, can give a real boost to public transit, especially bus transit. In London, the evidence backs this up: new service has been added and ridership has gone up notably. London’s mayor may have viewed transit

improvements as part of the necessary politics, or as just good management; but we can view them as logically following from the favorable conditions created by congestion pricing.

The benefits to transit users and providers are direct and quantifiable. I don’t need to take a position on the marvelous side benefits often attributed to public transit. But the irony is, to the extent those side benefits are real, they add weight to the arguments not for transit policies per se but for good management of street resources through pricing. Transit advocates have every reason to be among the greatest boosters of road pricing.