Running to work is the most active form of active transport. #RunCommute

As a transportation researcher, I sometimes get asked what falls into the Census’s “other” category of how people get to work—hoverboarding, rollerblading, kayaking? In Ottawa, three percent of commuters ice-skate to work in winter months. In other cities, notably big, dense ones with awful traffic and jam-packed subways, an increasingly popular way to commute is running. Lacing up running shoes and hoofing it to work is arguably the most active form of active transport and helps meet the Surgeon General’s recommended 30 or more minutes of physical activity per day. Combining two things we need to do—exercising and getting to work—can pay off. Research shows active commuters cut their odds of obesity by 50 percent.

Running as part of one’s daily livelihood is not new. Our Neolithic ancestors survived by chasing and eventually wearing down their prey. Many of Kenya’s great endurance athletes spent their youth running long distances to and from school in the highlands of the Rift Valley. Running to stay fit, however, is a fairly recent phenomenon, and running to work even more so.

Lacing up shoes and hoofing it to work is arguably the most active form of active transport.

Being a runner, I wanted to learn what we know about this subject. It turns out there is little research on run commuting. In the past few years, however, dozens of websites and blogs have appeared, offering tips and chronicling the growing popularity of this travel mode. For example, The Run Commuter (theruncommuter.com) aims to “educate and encourage people to replace, modify, or supplement their automobile, public transit, or bike commutes with running.” A non-profit organization in Brazil, Corridamiga, pairs “running buddies” to “inspire people to run for urban mobility.”

Where It Is Trending and Trendy

In 2014, The Run Commuter surveyed 145 runners from 22 countries to learn who run commutes. The majority are college-educated, married, white males. In the US, run commuting is particularly popular in Washington, DC. Worldwide, London is the epicenter of the run-commuting movement. Both cities are natural habitats for run commuting with their traffic congestion, crowded subways, legions of fitness-minded professionals (many training for marathons and triathlons), workplaces that offer showers, downtown gyms, and linear networks of parks, bike paths, and trails that feed into the business districts. Both cities also have well-landscaped, run-inspiring riverfronts. Simon Cook at Royal Holloway University wrote a thesis on run commuting, characterizing evenings along the Thames Path as a steady stream of “trainer-clad, backpack-laden, GPS-tracked, fluorescent, sweaty, speedy people making their way from a day at the office.”

Run commuting in London picked up steam during the 2012 Olympics, when transport networks were saturated. Two years later, run commuting had increased threefold. London’s geography also played a role. Every weekday, hordes of workers arrive at one of London’s eight mainline train stations to complete the last leg of their journeys. For many, finishing the last three to five miles on their own is preferable to overcrowded Tube trains. With 14 cyclists killed on London’s roads in 2013, some view running as a safer option.

London’s active run-commuting scene has spawned a variety of running services. Home Run London, the first service of its kind, carries runners’ backpacks or even the runners themselves if they become too tired. The Run2Work campaign, an “awareness-raising, tip-sharing, and encouragement-giving” program, sponsors a run-to-work day the first Thursday of every month and lobbies for the same favorable tax breaks accorded to UK cyclists.

Surveys by The Run Commuter and others in the UK found that most run commuters run to work two to three times per week, averaging around five miles each way. Although the majority run to and from work the same day, many take transit or bike part of the way. There are of course those who run more than others. For the past decade, a small group of Bay Area runners have gathered at 5 am twice a week, every week, for a 15-plus-mile run between Marin County and their jobs in downtown San Francisco. Also twice a week, a medical researcher runs 16 miles each way over hilly dirt roads to her job at the University of Michigan (equivalent to two 50Ks, every week). ­­­­

The Likes and Dislikes of Run Commuting

What motivates people to run commute? For many, it kills two birds with one stone: combining exercise with commuting. Some are drawn to it as the cleanest, healthiest, lowest-cost commute available. Others prefer it over the stress of fighting traffic, cramped trains, overcrowded platforms, and rude passengers. Still others like the mental benefits—it provides an endorphin rush, elevates moods, enables escapism, and increases productivity at work. Longer term, run commuting has the opposite effect of car commuting, reducing rather than increasing anxiety and stress. Some appreciate the improved work-life balance afforded by run commuting—achieving fitness and training goals while freeing time for friends and family.

Longer term, run commuting has the opposite effect of car commuting, reducing rather than increasing anxiety and stress.

To further probe their likes and dislikes, I surveyed 77 run commuters in the US and UK. Respondents were a hearty bunch, averaging three runs per week at a distance of 5.5 miles and a speed of 9 minutes per mile. The most common reason they gave for run commuting was to get in a workout (68 percent of respondents). Next were the mental benefits of mood improvement and escapism (38 percent of respondents). The other top reasons in order were efficiency (it saves time by combining exercise and commuting), being outdoors, saving money, and reducing stress.

What respondents most disliked about run commuting was carrying items in backpacks (33 percent), followed by logistics (e.g., planning for access to clothing and toiletries at work), weather, the absence of showers at workplaces, running in the dark, and arriving at work sweaty.

My survey also included a few policy-related questions. For the days the respondents did not run commute, many were still active commuters—44 percent biked and 22 percent walked. More common, however, was taking transit. Around a third drove some of their non-running days.

Showers and lockers were often a prerequisite to run commuting—they were available to 82 percent of respondents. Providing a shower is far less costly to employers than subsidizing parking spaces and can also attract fitness-minded employees. In London, firms like Barclays and GE showcase their on-site shower facilities as a recruiting tool. London’s new Zig-Zag office building markets its basement shower and locker facilities to prospective tenants. 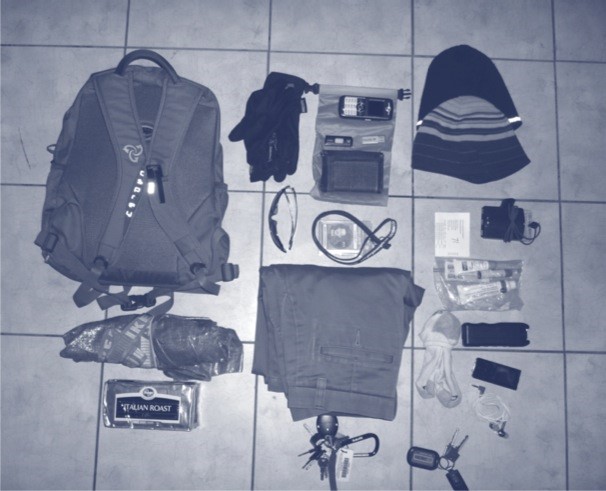 I decided to immerse myself in the subject matter and give active commuting a try. In my case, it meant running from my home in Lafayette, California, to the UC Berkeley campus. It’s exactly 10 miles each way, with lots of ups and downs along curvy residential streets, as well as stretches of two-lane arteries without sidewalks or bike paths. I’ve done plenty of long runs, making the distance seem manageable, and I could shower and change clothes at the gym near my office. Nevertheless, this would be the most physical effort I put into getting to and from work in a single day. And since I did this in January, it meant heading off to work in the dark, guided by a headlamp, and returning home in the dark as well.

My main question was how the experience would affect my productivity and mood. With 1,800 feet of elevation gain, the morning run commute took over two hours, considerably more than my typical 20-minute drive to work. Since I also got in my morning workout, however, the change was a wash time-wise, with roughly the same total time devoted to commuting and exercising. The big difference, however, was that I had at least another two hours to run in the evening. While I felt as alert and keyed into my work as when I drive (one colleague even said I seemed unusually perky that day), I was exhausted by the time I got home.

My own situation, with a mountain separating my home and workplace, makes door-to-door, bi-directional run commuting impractical. For this reason, I did a “linked run commute” the following week, taking BART part of the way. This cut my round-trip commute time by 60 percent and elevation gain by 83 percent, reducing my after-work exhaustion.

Will I do it again? Probably, though only the easier rail-linked version. What I liked was the efficiency of run commuting—combining both utilitarian travel and exercise. What I disliked was the logistical hassle of organizing and dropping off my clothes, laptop, etc. at my office the day before the runs.

If you enjoy running, give it a try, in whatever form works best for you. You’ll shrink your carbon footprint, perhaps shed a few pounds, and maybe even arrive at work feeling on top of the world.