The Davis Bicycle Studies: Why do I bicycle but my neighbor doesn’t?

New attitudes are as important as supportive infrastructure to encourage bicycling.

Pick a city, any city in the US, and then pick a house within that city. Open the door of its garage and you’re likely to find a bicycle. Chances are good that it is covered with dust or has a flat tire. If not, and if its owner has in fact used it any time recently, odds are the purpose was exercise or recreation. Compare this to a garage, any garage, in Davis, California. Inside you’re likely to find several bicycles—more bicycles, perhaps, than people living in that house. In all probability, one or more of those bicycles is used at least weekly, not for exercise or recreation but for transportation—to get the rider to work, school, the store, a restaurant, or another destination in town. Davis is one of the few places in the US where bicycling is a substantial mode of transportation. With the goal of helping other communities in their efforts to promote this low-cost, low-polluting, health-promoting mode, my students and I have undertaken a series of studies over the last five years to understand bicycling in Davis.

Davis is one of the few places in the US where bicycling is a substantial mode of transportation.

Davis gained a reputation as a bicycle-friendly town as early as the 1950s. The city has many natural advantages for bicycling: it is flat, compact, and has favorable weather for much of the year. But its bicycle friendliness also reflects concerted policy efforts. Plans for an expanded University of California campus in Davis in the late 1950s featured extensive bicycle paths. A few years later, a Davis family returning from a year in the Netherlands inspired city officials to embrace bicycling. In 1967, the city striped the first bicycle lanes in the US. In the years that followed, city staff experimented with a variety of designs for bicycle facilities and for accommodating bicycles at traffic signals. Meanwhile, the university invented the bicycle roundabout, now used at other schools, to handle the large number of bicyclists on campus. Today, Davis has over 50 miles of on-street bike lanes and over 50 miles of off-street bike paths in an area of less than ten square miles, with 25 dedicated bike bridges and tunnels. 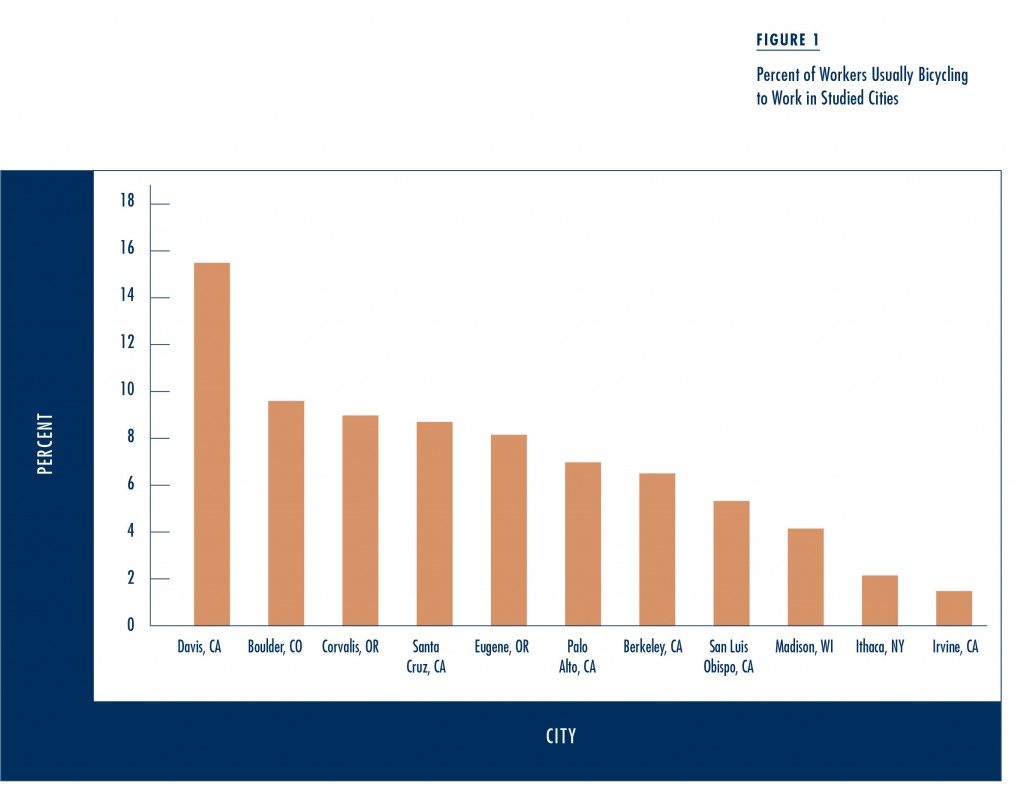 This infrastructure supports a substantial amount of bicycling. According to the latest American Community Survey data, over 15 percent of Davis workers usually commute to work by bicycle. Our own surveys provide even more impressive numbers. According to the 2010–11 Campus Travel Survey for UC Davis, 46 percent of faculty and 40 percent of staff who live in Davis commute to campus by bicycle, as do 47 percent of undergraduates and 55 percent of graduate students. Our 2006 survey of adults in Davis and five comparison cities showed that 53 percent of Davis residents bicycled at least once in the previous week. Of those who biked, over half did so for transportation rather than recreation. In 2009, we surveyed students at Davis High School and found that just over one third usually bicycle to school. The same year, counts of bicycles in the racks at elementary schools in the city found that the share of students bicycling to some schools is as high as 25 percent. When we surveyed parents at Saturday morning soccer games in 2006, nearly 20 percent reported that their children had bicycled to the game. In comparison, less than 1 percent of daily trips in the US are by bicycle.

But perhaps even more interesting than the fact that so many people in Davis bicycle is the fact that so many more don’t, despite the favorable conditions. Nearly half of adults had not bicycled in the previous week, over half of students arrived at the high school by car, and over three quarters of soccer players were driven to their games. So why do some Davis residents bicycle but others don’t?

The obvious answer is distance. Because neighboring cities are separated from Davis by 10 miles of agricultural land, most residents who do not work in Davis face commute distances beyond what they would consider feasible for bicycling. In our survey, 47 percent of residents who work in Davis commute by bicycle, compared to less than 4 percent of residents who work outside of Davis. Among campus employees, only about 2 percent of those who live outside of Davis commute by bicycle. But distance doesn’t explain everything. Most UC Davis faculty and staff who live in Davis do not bicycle to campus even though they live less than three miles away. So what else, besides distance, explains why some Davis residents bicycle but others don’t?

For adults, the answer has much to do with individual attitudes. In analyzing the data from our 2006 survey, we found that comfort with bicycling was one of the most important factors differentiating residents who regularly bicycle for transportation from those who don’t. Another one of the most important factors was agreement with the statement “I like riding a bike. Those who “strongly agreed with this statement were far more likely to bicycle regularly even than those who just “agreed.

For children, whether one bicycles also has a lot to do with attitudes, but the attitudes of parents are as important as the attitudes of the children themselves. Distance from home to the soccer field was of course an important factor in whether or not families bicycled to games, as was the ability of the child to bicycle. But equally important was whether the parent regularly bicycled more than once per week and whether the player bicycled to school (Figure 2). 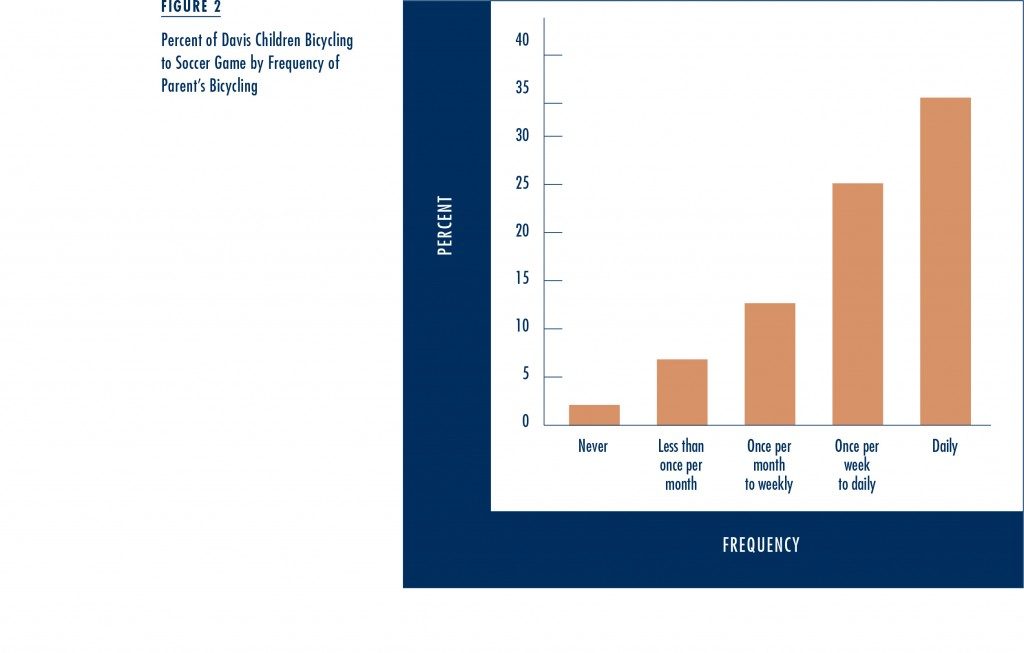 In other words, some families are simply more bicycle oriented than others. We saw this same effect in our study of bicycling to high school: distance to school was important, but students with parents who were willing to chauffer them places and did not encourage bicycling were far less likely to bicycle to school. Teens’ having a driver’s license and access to a car—conditions over which parents have a significant influence—also reduced bicycling. The students’ attitudes—including liking to bicycle and confidence in bicycling—mattered as well, but much less so than parental encouragement. Surprisingly, friends’ opinions seemed to have no influence at all.

In all these studies, gender differences play an important role: women are less likely to bicycle regularly or to commute by bicycle, and girls are less likely to bicycle to soccer games or to school. In our 2006 survey, women expressed greater concern for safety than men, since they are more likely to fear both being in a collision and being attacked. They reported feeling less comfortable bicycling and they liked bicycling less than men. Among students, faculty, and staff at UC Davis, under 60 percent of women said that they are “very confident riding a bicycle, compared to over 80 percent of men. For high school students, we found similar differences: girls liked bicycling less and felt less confident bicycling. These differences in attitudes between men and women clearly contribute to their differences in bicycling (Table 2).

Even with good infrastructure cities hoping to increase bicycling will need to find ways to change attitudes.

Many cities in Europe have combined such programs with infrastructure investments—and with disincentives for driving—to good effect. My favorite example is Odense, Denmark, a city about three times the size of Davis where one quarter of all trips are by bicycle. Densities and distances are similar to Davis, but the quality of the bicycle infrastructure puts Davis to shame. On my stay there several years ago, I was particularly impressed with the bicycle signage, parking facilities, and “green wave signals (a sequence of traffic signals timed for the speed of bicycles rather than cars). The live bicycle counts publicly displayed on an electronic sign in the city center were especially fun. The city has implemented many creative programs in its efforts to increase bicycling, including giving bicycles to domestic workers, taking senior citizens on guided bicycle rides, and lending bicycle trailers to parents of young children. The city’s efforts produced an 80 percent increase in bicycle trips between 1984 and 2002.

Personally, I find it frustrating that bicycling in Davis is not more pervasive. I moved to Davis for my job rather than for the bicycling, but I naturally embraced bicycling as my primary mode of travel once I got here. Sure, I believe in the importance of minimizing my driving, but I also simply enjoy getting on my bike more than I enjoy getting into the car. This may have something to do with all the time I spent getting around by bicycle from the age of four or five through my high school years. Now I can’t imagine going back to a car-dependent lifestyle. And that is exactly what my research team and I are trying to understand in our next study: where do attitudes toward bicycling come from and why do some people enjoy bicycling so much more than others? We’ll see. 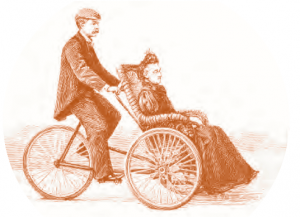