Bikesharing is booming worldwide and not deterred by rising car ownership.

Bikesharing has evolved greatly since the first program was launched in the Netherlands in the mid-1960s. As of May 2011, there were an estimated 136 bikesharing programs in 165 cities around the world, with 237,000 bikes on the streets. In the Americas, bikesharing activity has spread to Canada, Mexico, the US, Argentina, Brazil, and Chile. Asia, which represents the fastest-growing bikesharing market today, has programs in China, South Korea, and Taiwan.

Bikesharing has passed through three distinct generations. First-generation bikesharing, or White Bikes, began in Amsterdam in 1965. Fifty bicycles were painted white, left permanently unlocked, and placed throughout the inner city for the public to use freely. Providing the bicycle was the main component in this free bike system. Because users often stole or damaged the bikes, this initiative failed soon after its launch. Despite Amsterdam’s disappointing experience, the bikesharing concept caught on.

Problems with first-generation bikesharing led Copenhagen to launch an improved bikesharing model in 1995. This led to the second bikesharing generation, known as coin-deposit systems. The main components of this generation are: 1) bicycles distinguished by color and special design; 2) designated docking stations in which bikes can be locked, borrowed, and returned; and 3) small deposits to unlock bikes. By designating specific bicycle station locations and adding coin-deposit locks, second-generation systems are much more reliable, as users have a defined and secure space to access available bicycles. However, theft is still a major problem with coin-deposit systems largely due to customer anonymity.

Building upon previous experience, third-generation bikesharing is gaining more widespread popularity by incorporating advanced information technologies (IT) for bicycle reservations, pick-up, drop-off, and information tracking. Third-generation bikesharing has four main components. First, program bicycles are distinguished by special designs or advertising displays on the bikes. Second, each program employs docking stations. There are two types of docking station—fixed and flex. The majority of bikesharing programs use fixed stations, which are designated stations with multiple bicycle docks and a kiosk. Flex stations use mobile phone technology and street furniture (i.e., a stop sign post) for bicycle pick up and drop off. Users of flex stations receive a code on their mobile phone to unlock bicycles. They leave bikes at major intersections and inform the program where the bicycle is locked. This approach makes bicycles available throughout an entire city, and it minimizes the amount of infrastructure needed to operate a program. A third major component is the user interface necessary for check-ins and check-outs at the kiosks. Finally, advanced technology (e.g., mobile phones, magnetic stripe cards, and smartcards) allows users to locate, reserve, and access bicycles. Today, most bikesharing programs are third-generation systems.

Today, the most widely known IT-based system is Vélib’ in Paris…[which] operates with 20,600 bicycles and 1,451 bike stations, which are available every 300 meters throughout the city center.

Vélo à la Carte, launched in 1998 in Rennes, France, was the first IT-based system. Today, the most widely known IT-based system is Vélib’ in Paris. To date, Vélib’ operates with 20,600 bicycles and 1,451 bike stations, which are available every 300 meters throughout the city center. In its first year of operation, Vélib’ reported 20 million trips made.

In the Americas, Washington, DC was the first to implement an IT-based system. Today, the largest third-generation program in North America is BIXI in Montreal. Launched in May 2009, Montreal’s BIXI operates with 5,000 bicycles and 400 stations. The program has expanded into Toronto and the Ottawa-Gatineau area.

Emerging fourth-generation systems include all the main components seen in third-generation systems but differ in that they are linked with public transit. The goal is seamless integration of bikesharing with public transportation and other alternative modes, such as taxis and carsharing. This means that bikesharing stations and parking are conveniently located near transit stations, transportation schedules (such as bus and train arrivals and departures) are coordinated, and a single payment smartcard creates access to all available options.

Cleaner technologies are also a key development in fourth-generation systems. BIXI in Canada has solar-powered, mobile stations that will likely be standard in future systems. The stations can be moved to different sites after usage patterns are observed. Other improvements in this generation include cleaner technologies and incentives that encourage sustainable bicycle redistribution. Giving riders a price reduction or extra time credit for leaving bicycles at empty docking stations can reduce the need to use trucks to redistribute bicycles.

Bikesharing has many potential benefits for individual users and society, but research on the social and environmental benefits of bikesharing is limited. Early program data suggest that bikesharing has the potential to reduce emissions due to modal shifts. For instance, SmartBike, Vélib’, and BIXI have estimated the average distances for trips that their programs divert from other modes of travel (Table 2). If bikesharing replaces trips made by cars, there is a notable potential to reduce GHG emissions.

While limited, available data also suggest that bikesharing has changed behavioral trends. For example, during the first year of Vélo’v, Lyon documented a 44 percent increase in bicycle trips. Ninety-six percent of Lyon’s bikesharing members were new users who had not previously bicycled in the Lyon city center. In addition, bicycle riding in Paris increased by 70 percent after the launch of Vélib’. 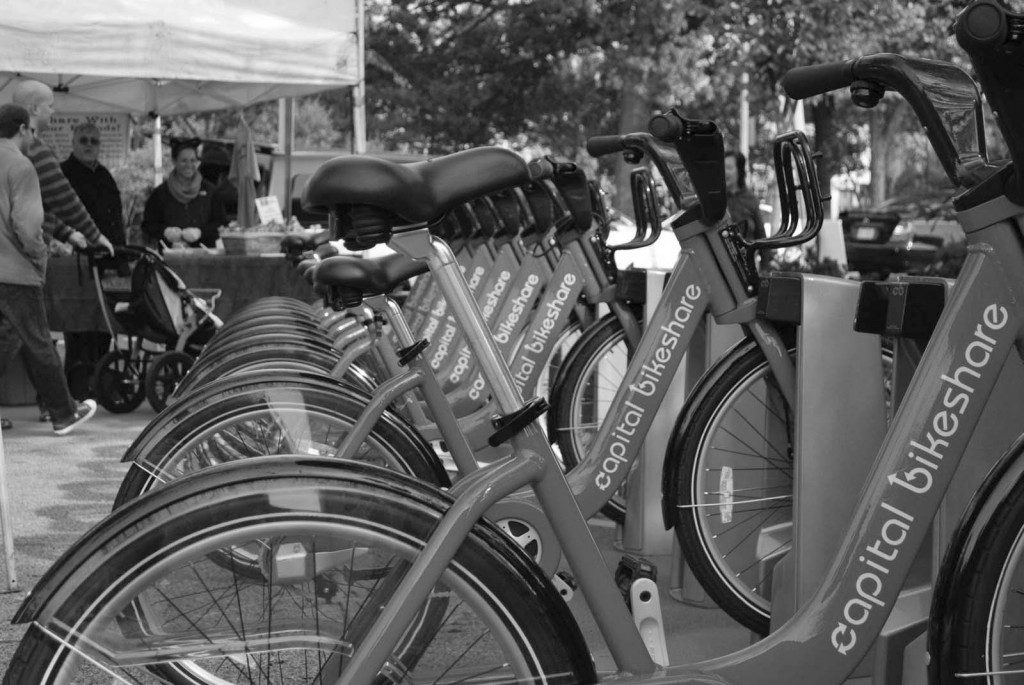 The evolution of bikesharing technologies and business models has led to a range of options for program implementation. For instance, Mexico City—one of the most congested cities in the world—implemented bikesharing as a way to help alleviate traffic congestion. Despite historically low cycling levels, this program has reached capacity at 30,000 members, with a waiting list to join. Hangzhou—a city with historically high levels of cycling—launched bikesharing as a feeder service for public transit throughout the city by placing the docking stations near transit stops. Hangzhou’s program has expanded several times to meet demand. Montreal deployed bikesharing as a strategy to complement bus and rail transportation because it provides a low-carbon solution to the “first mile/last mile” problem. By bridging the gap between existing transportation modes, it encourages individuals to use multiple modes. Residents fully embraced the program as part of everyday transportation, with BIXI users completing 1.1 million trips during the first season and 3.3 million trips during the second. These examples suggest that despite varying cycling levels, and differing transportation needs, bikesharing has been able to adapt and succeed under a range of circumstances.

Bikesharing programs must overcome several challenges to ensure future growth. Despite technological advances, both third- and fourth-generation bikesharing programs must consider bicycle theft and vandalism. A 2009 survey of Vélib’ reported that, since its launch in 2007, 7,800 bicycles disappeared and another 11,600 were vandalized. High rates of theft raise concerns since Vélib’ employs bicycles that cost about €400 (US $530). To limit the impact of theft and vandalism, Hangzhou’s program uses inexpensive bicycles.

Another area to consider is bicycle redistribution, which refers to the process of relocating bicycles according to demand patterns. Vélib’, for instance, manages its bicycle fleet by using natural gas vehicles to transport bikes from one station to another. BIXI and Hangzhou use trucks to redistribute bicycles. BIXI has incorporated on-board computers in its trucks so the drivers can easily assess which stations are overcrowded or are experiencing bicycle shortages. Programs such as BIXI, Vélib’, Capital Bikeshare, and DublinBikes also encourage redistribution by providing users with an additional fifteen minutes at no extra cost to relocate their shared bicycle from a full station to a nearby station with available return slots. 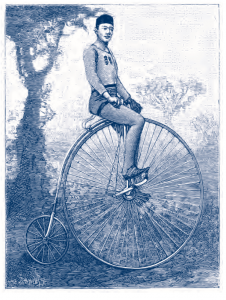 Cities also need to improve bicycle infrastructure. A survey by Jennifer Dill and Theresa Carr found that every additional linear mile of bike lanes per square mile leads to a 1 percentage point increase in bicycle commuters. While this survey does not prove a cause-and-effect relationship, it does highlight the fact that commuters will use bicycle lanes when provided.

The Hangzhou Public Bicycle program in China provides many insights. In a March 2010 survey of Hangzhou Public Bicycle members and non-members, we found that bikesharing is attracting users who simultaneously employ other transportation modes such as buses, walking, autos, and taxis. In addition, users are incorporating bikesharing into their everyday commute. The survey also found that member households with personal vehicles were using bikesharing services. In fact, members exhibited a higher rate of auto ownership (22 percent) than non-members (11 percent). This suggests that car ownership does not reduce the likelihood of bikesharing use.

Overall, the Hangzhou survey found that members were satisfied with the service. Recommendations for program improvement included more bicycle parking spaces, increased bike availability (more stations and bikes), and extended service hours. Members also indicated that the program should provide real-time information regarding bike and parking availability. Non-members noted that improving bicycle locking mechanisms, increasing the number of stations, and improving the member enrollment process could attract them. These lessons can be used to expand bikesharing in Hangzhou and other cities.

A growing demand for sustainable transportation has led cities worldwide to adopt bikesharing. As of Spring 2011, there were an estimated 136 bikesharing programs in approximately 165 cities around the world, each learning lessons from the past and each other to gain a greater understanding of implementation and operational procedures.

Ongoing research is still needed, particularly in the areas of social and environmental benefits, sustainable business models (most bikesharing programs lose money), supportive infrastructure, and safety. Nevertheless, our case study on Hangzhou’s bikeshare program suggests that auto ownership may not discourage bikesharing, which is a promising prospect for car-dependent cities worldwide.

John Pucher. 2011. “Bicycling Renaissance in North America? An Update and Re-Appraisal of Cycling Trends and Policies,” Transportation Research Part A, 45: 451–475.

Stacey Guzman is a Research Assistant at the Transportation Sustainability Research Center at the University of California, Berkeley (staceyguzman@berkeley.edu).